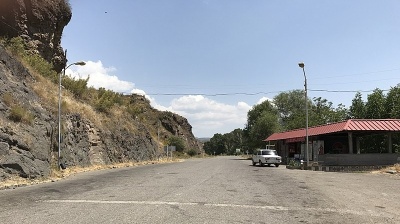 The road through Lachin.
By Ani Mejlumyan for Eurasianet October 6, 2020

Lachin was almost empty. The power was out, and one of the only people we saw was a worker who was repairing the line. We stopped into one sad, dark shop run by a sixty-something man.

“Why would I leave, where would I go?” he told Eurasianet. “We sent our children away, but this is our home, we’ll live here or die here.”

An air raid siren sounded, and we ran back to the car before I could get his name.

Since the fighting between Armenians and Azerbaijanis began again on September 27, this little town – which Armenians call Berdzor – is playing a key strategic role.

The only open road connecting Armenia to Nagorno-Karabakh passes through here. As Karabakh is under continual heavy attack from Azerbaijan, Armenians are sending in military reinforcements while civilians are fleeing. They all pass through Lachin.

This road was the first to open between Armenia and Karabakh following the Armenian victory in the war with Azerbaijan that ended in a ceasefire in 1994. A new road was opened in 2017, further to the north, which cuts the travel time between Yerevan and Stepanakert by more than an hour.

But it passes closer to Azerbaijani-controlled territory, and on October 1, a few days after the fighting started, that road was closed “for the safety of civilians” after it was shelled by Azerbaijani forces. It remains closed.

That leaves the old road through Lachin, and the road has been busy.

In one direction are headed personnel and other military forces. New checkpoints have appeared along the road to direct traffic.

It’s unclear how many people have left Karabakh, but Armenian social media is full of people from Karabakh needing places to stay in Yerevan. Traffic on the road is heavy with cars, buses, and minibuses; cars can be double-packed with two or three people sitting on a seat meant for one.

But this road, too, is vulnerable.

On October 2, the old road, through Lachin, also was hit, parts of it damaged, but it has managed to stay open. There are regular rumours it is closed.

At one point when we were approaching Lachin, a police officer stopped our car and told us to pull over. “The road is being repaired, it shouldn’t take long,” he told us. Fifteen minutes later we were back on our way, at times taking detours off the main road into smaller roads as directed by the police officers there.

As we were rushing to the car after the air raid siren sounded, a man in a military uniform approached us. “Don’t be afraid,” he said. “It doesn’t mean the strike is on Lachin.” But a few minutes later, something hit just 200 metres away, and then again. The strikes were deafeningly loud.

It was just minutes later that Artsrun Hovhannisyan, the Ministry of Defence spokesperson, wrote on Facebook: “The Lachin road is functioning normally. Stop spreading disinformation.”