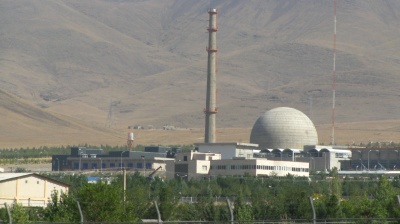 Iran's heavy water reactor near Arak. Under the nuclear deal, Tehran agreed to redesign it to minimise production of plutonium. A reactor core was removed and filled with concrete.
By bne IntelliNews May 15, 2019

As warned, Iran appears to have moved ahead with a reduction in its commitment to the nuclear deal—reports on May 15 indicated that Tehran has dropped the limits it had placed on the production of low-enriched uranium and heavy water.

Under the accord (formally the Joint Comprehensive Plan of Action, or JCPOA) Iran agreed to a plan under which it could produce a maximum of 300 kilograms of low-enriched uranium, suitable for civilian nuclear purposes but nowhere near nuclear-bomb-grade, and up to 130 tonnes of heavy water. Excess amounts of the materials would be stored or sold abroad. However, the US lately warned it would sanction foreign companies that purchase enriched uranium or heavy water from Iran as it tightened its sanctions regime with measures attacking the Islamic Republic’s nuclear development programme, all of its attempted oil exports and sales of industrial metals.

The moves reportedly made by Iran—communicated to Iranian news agencies by national security officials—do not appear to violate the JCPOA, but Iran has warned that unless the world powers still signed up to the nuclear deal—France, Germany, the UK, China and Russia—do not within 60 days do substantially more to assist its economy in the face of the unprecedented sanctions attack waged by the US, it will start enriching uranium at a higher level. At that point, the nuclear deal could start to unravel.

The nuclear deal caps the level of purity to which Iran can enrich uranium at 3.67%, far below the 90% needed to achieve nuclear-weapons-grade. It is also considerably below the 20%-level which Iran was achieving before the JCPOA took effect at the start of 2016.

The European Union and the foreign ministers of Germany, France and the UK say they are still committed to the JCPOA but will not accept any ultimatums from Tehran.

Europe told to ‘waste no more time’
Central Bank of Iran (CBI) chief Abdolnasser Hemmati has this week pressed Europe to waste no more time in commencing a special payment vehicle that would help to get some extra trade between European companies and Iranian enterprises moving. The situation is becoming more and more fraught with some reports indicating Iran’s crude oil exports could soon fall to their lowest in decades.

“The simplest solution to operationalise the Instex and STFI [Iran’s counterparty entity] mechanisms is for EU companies and entities to buy Iranian crude and for Europe to open a credit line for its exporters to start exporting to Iran,” Hemmati wrote in an Instagram post on May 13.

Separately, although both Donald Trump and Iranian Supreme Leader Ayatollah Ali Khamenei have this week talked down the prospect of a military clash between their countries, May 15 saw the US announce it was pulling all non-emergency staff from Iraq and Iranian government and military officials make aggresssive comments aimed at Washington and Tel Aviv.

Major General Hossein Salami, commander of Iran’s elite Islamic Revolutionary Guard Corps (IRGC) was, meanwhile, reported by Fars news agency, to have said: “We are on the cusp of a full-scale confrontation with the enemy. This moment in history, because the enemy has stepped into the field of confrontation with us with all the possible capacity, is the most decisive moment of the Islamic revolution.”

The US has beefed up its military forces in the Gulf region. It has lately sent an an aircraft carrier, B-52 bombers, Patriot missiles and an amphibious assault ship in a show of force against what the US claims are Iranian threats to its troops and interests in the region. However, whether or not the US has intelligence indicating a heightened military threat to its armed forces from Iran is unclear. A British general on May 14 said he saw no increased threat (he was later slapped down by the Pentagon) and reports in US media outlets refer to anonymous briefings from officials who say Trump administration hawks are exaggerating even insignificant changes on the ground.

The Washington Post on May 16 ran an article citing US officials making the case that Trump is frustrated by advisers because he is not convinced the time is right to attack Iran. He is still reportedly pushing for talks with the Iranians aimed at striking a revised nuclear deal, but Tehran has rebuffed any idea of talking to Trump.