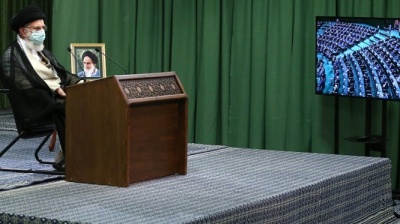 Khamenei made it clear he was backing the tightly restricted field in a video-link address to the Iranian parliament.
By bne IntelIiNews May 27, 2021

Iran’s Supreme Leader Ayatollah Ali Khamenei on May 27 endorsed the hardline Guardian Council election vetting body’s rejection of the leading moderate and moderate conservative candidates for Iran’s June presidential election despite an appeal to him to expand the field from the country’s outgoing pragmatic, moderate president, Hassan Rouhani.

The 82-year-old Khamenei now risks a situation in which a great many among the electorate, turned off by a contest in which two leading hardliners steadfastly loyal to him dominate the voting paper, stay away from the ballot box. Iran is usually fast to point to a healthy turnout after a presidential election, with high participation bestowing some legitimacy many see as sorely lacking in an Islamic system that means all decisions of the government can be over-ruled by the theocratic establishment, but it may not get the opportunity to do so this time around.

In announcing his decision to accept the vetting body’s list of seven candidates, Khamenei said: “The honourable Guardian Council, in accordance with its duty, did what it had to do and what it deemed necessary to do and identified the candidates.”

Khamenei appealed to Iranians to vote, saying: “Dear nation of Iran, do not pay attention to those who promote [the idea] that voting is useless...The outcome of the election lasts for years...Participate in the election.”

Hassan Khomeini, grandson of the Islamic Republic’s founder, Ayatollah Ruhollah Khomeini, said the move to boot out from the contest all candidates except Raisi and a few little-known politicians was “an anti-republican” move, adding: “If I were among the approved candidates, I would withdraw from running.”

Earlier, Rouhani said the sharp narrowing of the field by the vetting body—which does not provide any public explanation when it excludes a candidate—could turn the election into a “corpse”. "The heart of elections is competition. If you take that away, it becomes a corpse," he remarked.

Many Iranians have already made it clear that they will not vote amid rising discontent over economic hardship and curbs on personal freedoms. The restricted list of candidates will almost certainly see many more deciding to stay away from the polling stations. Official opinion polls, including one conducted in May by Iran’s state-run television, suggest turnout in the vote could be as low as 30%, significantly lower than in past elections, Reuters reported.

Those disqualified from running include Ali Larijani, a prominent moderate conservative who is a former parliament speaker and chief nuclear negotiator, and reformist First Vice-President Eshaq Jahangiri, an ally of Rouhani.

If Raisi wins the election, it could increase the mid-ranking Shi’ite cleric’s chances of eventually succeeding Khamenei. Rights groups have criticised Raisi, who lost to Rouhani by a landslide in the 2017 election, for his role as a judge in the executions of thousands of political prisoners in 1988.

Jalili, like Raisi a moderate, lost his right leg in the 1980s when fighting for the elite IRGC in the Iran-Iraq War. A former deputy foreign minister, he was appointed by Khamenei in 2013 to the Expediency Council, which is tasked with settling legislative conflicts between parliament and the Guardian Council.

Some prominent pro-reform politicians in Iran and activists abroad have called for a boycott of the election. The hashtag #NoToIslamicRepublic has been widely tweeted by Iranians inside and outside the country in recent weeks.