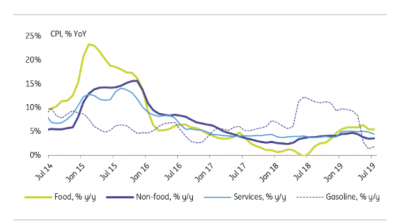 Russian CPI continued to decelerate in July, and at 4.6% y/y was below consensus
By ING Think August 7, 2019

Russian CPI continued to decelerate in July, and at 4.6% y/y was below consensus. However, this positive result was achieved only thanks to services, as last month's semi-annual indexation of tariffs was smaller than in July 2018. A further slowdown in CPI is still possible in 2H19, but food and gasoline prices will be the key watch factor

Russian CPI slowed in July thanks to services segment

The slowdown in the Russian CPI growth from 4.7% y/y in June to 4.6% y/y appears positive at a first glance, as it is below the consensus forecast of 4.7% (and in line with our expectations). However, a closer look at the CPI composition suggests that only the services segment (c. 28% of the total CPI basket) showed deceleration in the growth - from 4.9% y/y in June to 4.5% y/y in July - thanks to a more restrained indexation of communal housing tariffs: by 2.4% in July 2019 vs. 4.0% in July 2018.

Other CPI components failed to show deceleration, as food (c. 38% of the CPI basket) price growth stabilised at 5.5% y/y despite a higher base effect, while non-food CPI growth accelerated from 3.5% y/y in June to 3.6% y/y amid a pick up in gasoline prices from 1.4% y/y to 1.8% y/y, respectively. 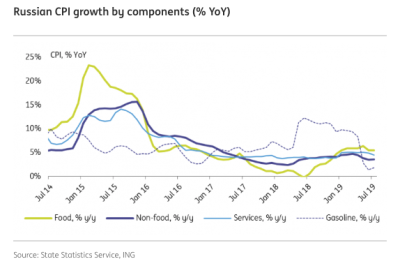 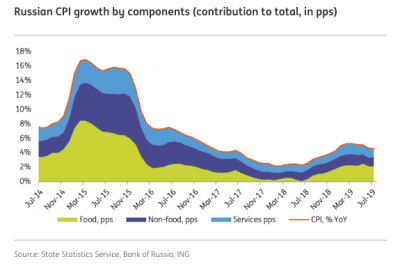 For now, the overall CPI performance is not a threat to our 4.0% y/y forecast for year-end 2019, mainly thanks to the food segment that should post a material deceleration in the price growth thanks to the so-far favourable global agri price environment (we've written about that here) and the base effect. Nevertheless, we acknowledge some risk factors that might cause negative surprises: 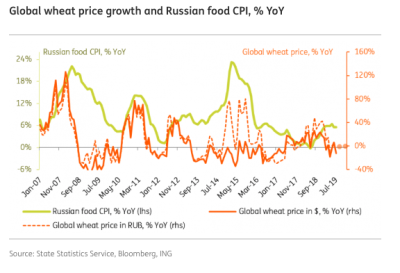 August to be the litmus test

The structure of July CPI growth increases the importance of the August numbers. A monthly deflation, which is warranted by seasonality and the recent weekly data, is required to alleviate our concerns regarding the CPI, especially in the agri segment. A lack of deflation in August would arrest the deceleration of the y/y CPI growth rates and may lower the likelihood of a further CBR rate cut on September 6, which so far remains our base case scenario.

ALACO DISPATCHES: I say Moldovan, you say Romanian…
7 hours ago
ING: Russian budget spending plays catch up in January
4 days ago
TRACE: A closer look at corruption risk in the western Balkans
11 days ago
ING: Poland's growth slows sharply and the outlook is poor
23 days ago
ASH: Putin moves from "Fortress Russia" to "Go for Growth"
23 days ago