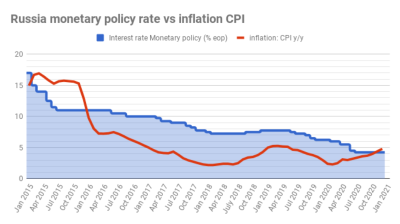 Inflation has risen to 5.2% in January, above the CBR's target rate of 4%, but the IMF believes inflationary pressures will fall as the ruble strengthens, and there is room for a 50bp cut at the next policy meeting on February 12. / bne IntelliNews
By bne IntelliNews February 10, 2021

Economists at the International Monetary Fund (IMF) say that the Central Bank of Russia (CBR) has room to cut 50bp off interest rates to boost growth in the coming months despite surging inflation.

In January, consumer prices in Russia grew 0.7% month on month, which pushed annual inflation well over the CBR’s target rate of 4% to 5.2% – the highest that inflation has been since May 2019.

The CBR has prioritised its fight against inflation, which fell to record post-Soviet lows in 2019 – over boosting growth, and remains one of the most conservative central banks in the world.

Prices have been pushed up in the second half of 2020 by rising food costs and the feed-through from the devaluation of the ruble that followed a collapse of oil prices in March, coupled with mounting concerns of new sanctions from the Biden administration.

However, as the end of the coronavirus pandemic is in sight commodity prices are rallying and oil prices broke through $60 per barrel for the first time in over a year on February 9.

The IMF believes inflationary pressures will subside as a strengthening ruble filters through into consumer prices, analysts at the IMF wrote in a statement cited by Bloomberg. Easing monetary policy now would prevent inflation falling below the central bank’s 4% target later in the year, they said.

“Staff estimates that 50bps in rate cuts are necessary under the baseline to avoid this from happening, and thereby help preserve room to respond to future shocks,” according to the report.

The central bank is expected to keep the key rate at a historic low of 4.25% for a fourth straight policy meeting on February 12, but economists will be looking out for signals that Governor Elvira Nabiullina will start adopting a more hawkish tone after inflation accelerated close to a two-year high.

Analysts at Citibank and Renaissance Capital say they are anticipating at least one small rate increase this year.

“It is true that some risks, should they materialise, could lead to a further depreciation of the ruble and be inflationary through this channel,” according to the report. “Staff believe there is a cost to waiting to see if these risks materialise, given lags to policy.”