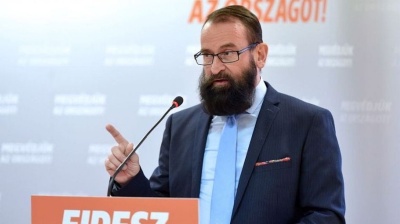 Founding member of the ruling conservative Fidesz party Jozsef Szajer announced his retirement from politics on November 29.
By Tamas Szilagyi in Budapest December 1, 2020

Belgian police broke up a sex party involving 25 men including at least one MEP as well as diplomats in a central Brussels bar on Friday night, local media reported on December 1, citing Belgian sources. In a statement issued later on Tuesday, Hungarian MEP Jozsef Szajer confirmed that he was present, but he referred to the event as a "private party". The 59-year-old, who announced his retirement from politics on Sunday, apologised for breaking lockdown rules.

Several diplomats and the MEP were present at Friday’s party, which took place above a cafe in the centre of the Belgian capital, near a police station. The unnamed MEP tried to flee through the window but injured himself before claiming European Parliament immunity, according to the first reports by Belgian HLN news site. Officers also found drugs on the spot.

The Belgian news site later named Hungarian MEP and member of the Fidesz party Szajer as one of the partygoers. The Hungarian politician, a key ally of Prime Minister Viktor Orban, submitted his resignation on November 30.

Earlier there had been speculation about his reasons for announcing his retirement from politics after 30 years as he did not provide any explanation for his decision.

Participating in the daily political struggle had been "an increasing mental strain", he wrote, adding his resignation was not related to the current fierce debate on the European stage. The Fidesz MP said he agrees with and supports the Hungarian government’s decision to block the EU’s next seven-year budget and recovery fund

On Tuesday Szajer acknowledged that he broke the lockdown rules and participated in the party. He said he did not have his ID or parliamentary card with him when he was called to identify himself by police on Friday night. He was taken home by police after he received a verbal warning, according to his statement in which he made no reference to the nature of the party.

The December 1 press release from the Office of the Public Prosecutor of Brussels noted that "a passer-by reported to police that he had seen a man flee down the drainpipe. The man had bloody hands and narcotics were found in his backpack".

Szajer did not confirm the nature of the party, and denied using drugs. "I didn’t use drugs, I offered to the police on the spot to have an official test done, but they didn’t do one. Police said an ecstasy pill was found. It’s not mine, I don’t know who placed it or how. I made a statement to the police about this," he wrote.

Szajer, one of the founding fathers of the ruling Fidesz party in 1988, has been an MEP since 2004, the year Hungary joined the EU. Previously, he actively took part in the roundtable talks over the transition of power, establishing the legal foundation for Hungary’s new democratic system. He went on to work for 14 years as an MP from 1990.

Between 2002 and 2004 he was a deputy speaker of the National Assembly. He has played an instrumental role in his party from the onset and as a legal expert he oversaw the overhaul of Hungary’s constitution in 2011.

In his statement the politician apologised to his family, colleagues and constituents.

"I ask them to evaluate my misstep in light of 30 years of persistent and dedicated work. I am solely responsible for my misdemeanour. Please do not extend it to my country or my political community," he wrote.

In a statement, the delegation of the ruling party in the European Parliament said that Szajer had "made the right decision" when he resigned.

In its report, the Belgian news site HLN stressed that Fidesz openly opposes equal rights for sexual minorities. One of the first decisions of the parliament during the extended emergency powers imposed over the coronavirus pandemic was to ban transgender people from legally changing their gender.

A recent constitutional amendment would prohibit adoption for gay couples. Single couples would need the approval of the minister in charge of family affairs, a post newly created by Orban to award one of the hardest working state secretaries in his cabinet, Katalin Novak. Szajer has never voiced his disapproval of such discriminatory legislation, Hungarian media pointed out.