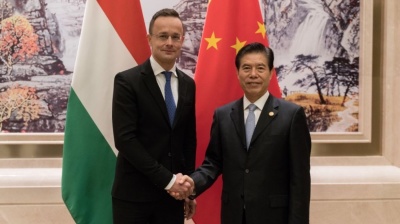 The US has piled pressure on European allies including Hungary, to shut out Huawei from network development on concerns that back doors in the system would enable the company to spy on other countries. With the decision to pick Huawei, the government has sent a clear message to global political and economic actors.

During the opening day of the second China International Import Expo (CIIE) Szijjarto emphasised that Hungary does not discriminate between companies on the basis of nationality, the only condition it imposes is to comply with the country's laws and regulations.

Huawei will work with the UK's Vodafone and Deutsche Telekom on the rollout of 5G services, he added.

Considering that Sino-Hungarian economic and political relations have never been so good, Szijjarto's statement is not particularly surprising, but the final decision on cooperation is still in the hands of Huawei's biggest potential partners, the major telecommunication companies planning to roll out 5G.

Hungary is at the forefront of digitalisation among EU member states, and the government has placed a great emphasis on developing e-commerce which opens doors to SMEs while cutting costs, he noted This is the second time Hungary has participated in the expo and this year the country was an honorary guest.

Before the forum, Szijjarto met with Chinese Commerce Minister Zhong Shan and the minister in charge of China's General Administration of Customs (GACC) Ni Yuefeng.

Szijjarto announced the launch of two new direct flights connecting Budapest with Chinese cities Chengdu and Xi'an, capitals of Sichuan and Shaanxi provinces after talks with the chairman of China Eastern Airline in Shanghai.

There is a huge competition in Central Europe to attract more Chinese tourists who prefer to travel to their destinations with direct flights. The launch of direct flights could give new impetus to Hungary's economic cooperation with China.