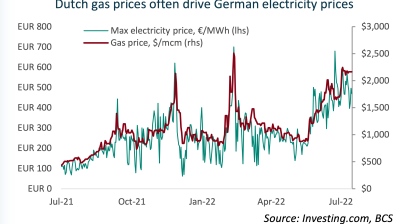 How do high gas prices push up the cost of power? / bne IntelliNews
By bne IntelIiNews August 10, 2022

BCS GM published a chart of gas and power prices and explained the connection between the two.

“The chart makes clear that natural gas usually sets the maximum price for German electricity. This is logical, as gas-fired power plants are the only ones that can provide the capacity and quick reaction time necessary to balance the market given significant volatility of both demand and the supply of intermittent wind and solar power,” BCS GM said. “Thus, when gas-fired generation is needed (which is often), power prices on the grid must be sufficient to cover the cost of gas as a fuel.”

Even though gas fired power stations don’t provide the baseload supply of power, which is increasingly covered by renewables in Germany, their role of stepping in when demand spikes means the highest cost of power is set by gas.

“This is why the record-high natural gas prices seen since last October have resulted in record-high prices on electricity markets,” BCS GM added.

Gas prices have soared since Gazprom reduced flows of gas to Europe by 60% in June and the subsequent disputes over Nord Stream 1 turbine repair that saw supplies fall further to 20% of the pipeline’s capacity in July has only pushed prices higher. Other disputes over the the ownership of the Polish section of the Yamal-Europe pipeline, and Ukraine's closure of one of the two entry points for Russian gas bound for Europe are affecting European consumers of electricity as well as of gas.

Having said that, gas does not always drive electricity prices: during times of plentiful wind or solar generation, low-efficiency gas peaking plants are not needed, and only more efficient Combined Cycle Gas Turbine (CCGT) plants may be dispatched, explains BCS GM.

But during times of low wind and solar, dispatchable gas plant capacity may run short, meaning prices have to be set by providers even more expensive than peaking gas plants.

“For example, the max price on 18 July of €680/MWh occurred in the early evening, when German onshore wind production was at its lowest point of the month and the sun was setting. Gas dispatch went practically to maximum July levels, as did draws from pumped storage and imports of electricity from neighbouring countries, one of which was presumably more expensive than the most expensive gas plant,” BCS GM concluded.