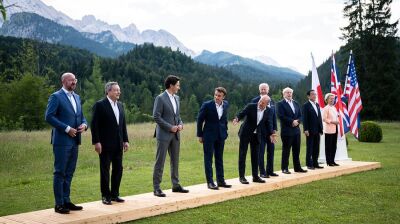 Gold and an energy price cap are the new sanctions being discussed by G7 leaders.
By bne IntelliNews June 27, 2022

As the dignitaries assembled, Russia rained down missiles across Ukraine in what was widely seen as a signal to the G7 leaders that Russia will not let up in its war against Ukraine.

Rockets hit residential buildings in Kyiv’s central Shevchenkivsky area at 6 am in an attack on the capital that has slowly been going back to normal. At least one person was killed and five injured, and others were still trapped in the rubble, according to local reports. Residents of Kyiv were shocked by the attack as air raid sirens have become normal, but most locals have been increasingly ignoring them as missile strikes have tapered off in recent weeks.

Yermak called on the West to recognise Russia as a “state sponsor of terrorism ASAP” and repeated the constant calls from Kyiv for more weapons. “Ukraine needs modern missile defence systems badly. We are telling it [to] our allies. Weapons save lives,” Yermak said as cited by the Financial Times.

After struggling to put a compromised sanction package on Russian oil exports as part of the sixth package of sanctions, attention has now shifted to targeting Russia’s gold reserves. The West froze some $300bn of Central Bank of Russia (CBR) reserves at the start of the war, but Russia has another $136bn of reserves in physical gold, most of it inside Russia, as well as around $170bn in cash in various denominations. Gold is Russia’s second largest export after oil.

US President Joe Biden unveiled the new gold sanctions on June 26 that will try to make it impossible for Russia to use its gold by threatening secondary sanctions on any bank or trader that does a gold-backed deal with Russia. In recent years, gold has been the top Russian export after energy – reaching almost $19bn or about 5% of global gold exports in 2020, according to the White House. G7 countries bought about 90% of Russia’s gold exports. The United States imported less than $200mn in gold from Russia in 2019, and under $1mn in 2020 and 2021.

More details of the sanctions are expected on June 28 following a discussion by the G7 leaders. However, experts say that restricting gold deals is notoriously difficult.

A second idea floated ahead of the summit is to cap the prices countries pay Russia for oil. Russia has already earned over $100bn from oil exports since the war started as prices have soared. The idea, championed by US Treasury Secretary Janet Yellen, is to introduce a price cap on Russia’s oil exports to limit the money Moscow can earn. While the price paid will be the same as the market price, the sum accumulating from the difference between the price cap and the market price could be held in escrow accounts and then be released if the war stops or used to pay Ukraine reparations.

Twin caps on the price of Russian oil and pipeline gas were being pushed hard by Italian Prime Minister Mario Draghi, and at the opening meeting he gained the support of the French president, Emmanuel Macron. “There is now more than mild optimism that this will work,” one source at the meeting told the Guardian.

Ukrainian President Volodymyr Zelenskiy is expected to call for more weapons in his address to the G7 by video and has already said that any delay in sending more and heavier weapons is only an invitation for more strikes against Ukraine.

Biden arrived in Bavaria with his message of unity and held a pre-event meeting with German Chancellor Olaf Scholz, who takes over from President Macron as the G7′s rotating president.

"We've got to make sure we have us all staying together. You know, we're gonna continue working on economic challenges that we face but I think we get through all this," Biden said as cited by US media.

Scholz replied that the "good message" is that "we all made it to stay united, which Putin never expected.”

The G7 summit has other issues to discuss according to European Commission President Ursula von der Leyen, who highlighted an agenda that also includes the global climate crisis, soaring inflation and dealing with broken supply chains.

Biden launched a global infrastructure partnership designed to counter China's influence in the developing world. He had named it "Build Back Better World" and introduced the programme at last year's G7 summit. The initiative aims to raise $600bn over the next five years, with the US contributing $200bn through private investment and government funding, the White House said.

Nato countries are holding a summit in Madrid on June 28. Zelenskiy will address that meeting too.