The freefall in private equity fundraising for Central and Eastern Europe (CEE) since the global financial crisis appears to have ended, but fund managers warn that there is still likely to be a shake-out before the sector stabilises.

According to the European Venture Capital Association (EVCA) annual report on the region (which excludes Russia), that was published in August, €1.47bn was raised last year, compared with €1.31bn of investments. The market is “getting back to equilibrium”, says Brian Wardrop, co-managing director of ARX Equity Partners in Prague.

The fundraising total was more than triple the previous year's and by far the highest figure since the 2008 crisis, but it was still well below the €4.03bn raised in 2007. It was even below the €1.5bn that Mid Europa Partners raised by itself in 2007, which is still a record for the region.

This year the continuing Russia-Ukraine conflict and the recent emerging market turbulence have put paid to any lingering hopes of a return to such past glories. Nevertheless, many funds raised in those fat years before the crisis will now have to raise fresh capital if they want to make more deals, which is likely to sort the sheep from the goats.

Many of the huge regional funds raised before the crisis underperformed – both compared to their predecessors and especially compared to other emerging markets – and raising fresh capital is not going to be an easy job. “Risks are going up and returns went down,” says one fund manager. “The interest in the region dramatically declined”.

Pekka Maki, managing partner of 3TS, says Central Europe’s problem is that, "when times are bad, they are spectacularly bad in this region.” And Robert Manz, managing partner of Enterprise Investors, says the shortage of local investors means that fundraising is dependent on cyclical international investor appetite, which often has an outdated view of the region’s risk profile. Only 12% of CEE private equity fund money was raised within the region, according to EVCA, half the proportion for Europe as a whole. 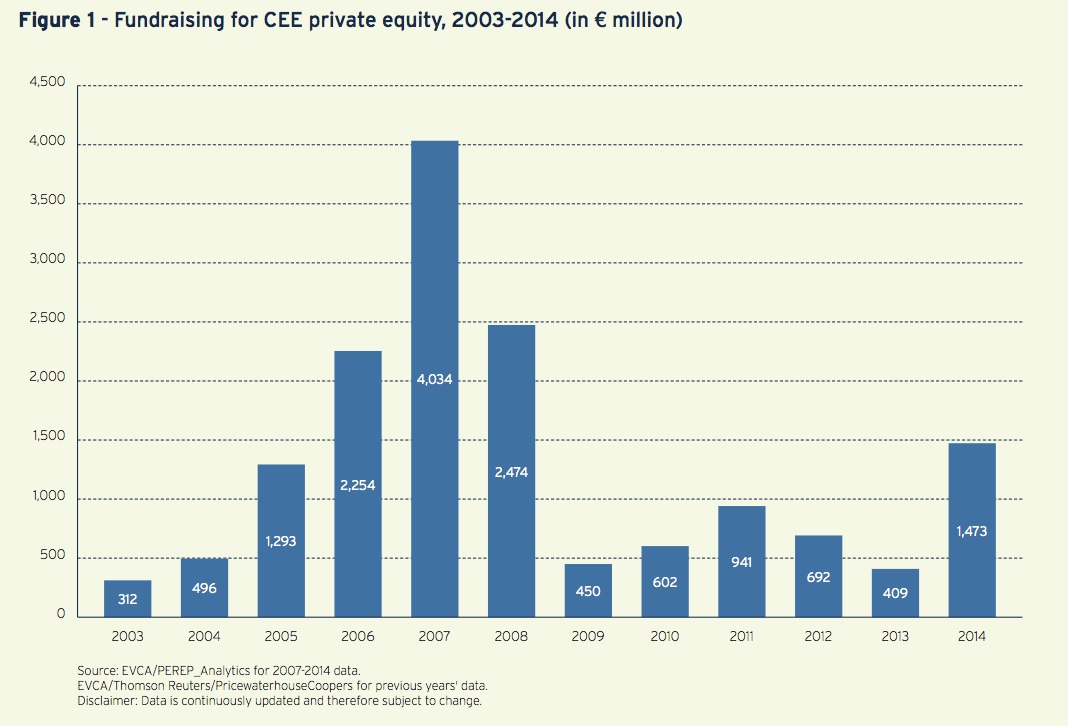 Even among the smaller funds, there is likely to be blood spilt, according to another manager, who estimates that there are around a dozen funds in the €80mn-200mn fund size bracket that currently need to raise fresh money. “There are a number at the smaller end of the market which have to go to the market soon and raise money,” he says. “Probably a quarter of the groups are not going to raise money.”

He named Bancroft Private Equity, Royalton Partners, Argus Capital, Krokus Private Equity, Resource Partners, ARX Equity Partners and AxxessCapital as among the funds that were rumoured to be considering or to have started fundraising. Value4Capital was also mentioned by another manager.

When they do start fundraising, as well as the gloomy regional environment and the disappointing performance of previous funds, the fund managers will have to overcome the problem of the incoherence of the CEE region as an investment proposition.

Countries such as Poland, the regional giant, and the Czech Republic and Slovakia have almost caught up economically  with Western Europe, at least on a purchasing power parity basis, and their business environments are often comparable. But much of Southeastern Europe is way behind on both counts, and the tiny size of many of the economies there makes them a very different kind of investment. “It’s become more of a fragmented story,” says Manz of Enterprise, which raised a €314mn fund in 2013. “It’s made it harder for [limited partners] to get their heads around what [Central Europe] is today.”

“There are less and less investors who want a dedicated exposure to the eastern part of the EU and beyond,” says Maki of 3TS, which raised a €108mn fund in 2013. He estimates there are around 30-50 such limited partners (investors) now, one tenth of the 2008 figure.

As well as the shortage of investors, the paucity of really big regional deal opportunities is also likely to cut fundraising appetite, particularly for the large pre-crisis regional funds. Few countries in the region are undertaking privatisation programmes, while the wave of disposals by foreign strategic investors anticipated after the global financial crisis seems to have already petered out.

Private equity investment in the region rose 66% to €1.31bn in 2014, according to EVCA, with two large buyouts accounting for 40% of this. Those buyouts were most likely the acquisition of SBB, the leading cable TV company in Southeast Europe, by KKR – its first deal in the region – and CVC Capital Partners’ purchase of Avast Software, the Czech security software provider.

Too big to succeed

Big deals agreed this year have included TPG’s acquisition of Hungarian real estate developer TriGranit, CVC ‘s purchase of PKPE Energetyka, the energy subsidiary of Polish Railways, and Apollo Global Management’s privatisation of Slovenian bank NKBM. But there are not enough to go round. “There is a lack of big enough projects for big PE players,” Ludwik Sobelewski, chief executive of the Bucharest Stock Exchange, told a panel discussion at the EBRD’s annual meeting in Tbilisi in May.

Maki notes that there is nothing specific about the region. “Most European funds cover this region OK. You don’t need a dedicated fund in order to do a deal once every five years in Bulgaria.”

“Investors view funds of €500mn+ as too big for the region,” says one fund manager. The last big regional fund raised was Mid Europa Partners’ Fund IV in 2014, which attracted €810mn, half the planned €1.5bn.

Advent International abandoned plans to raise a dedicated Central European fund in 2013, partly because it decided it could not do three to four big deals a year. Big global private equity players such as Advent – which still has offices in Prague and Warsaw – now tend to invest in the region through their global or European funds. Advent, which typically looks for deals of above €100mn, used its global fund to buy the Balkan operations of Hypo Alpe Adria, the stricken Austrian bank, in an up to €200mn deal completed in July.

Other large global PE funds are likely to only cover the region from outside, flying in to seal the big deals. EQT Partners, the Stockholm-based private equity fund backed by the Wallenberg family, is closing its Warsaw office, its only one in the region, though a spokeswoman told bne IntelliNews that “our interest in the region remains”.

Hence, in Central Europe there is likely to be a growing bifurcation between global PE funds operating from outside the region, and smaller locally-based funds.  These local funds will become more specialised in particular markets, kinds of companies and deals. Enterprise, for instance, targets deals in the €20mn-50mn equity range, and often founder buyouts. “The fundraising strategies are becoming much more focused,” says Wardrop of ARX, which looks to invest at least €5mn in what it calls Central Europe’s Mittelstand industrial companies, also often at a time when the founders want to move on. “The whole investment thesis has evolved and changed and shifted. It is no longer about rapid consumer growth. But it takes time to get that message across.”

Maki of 3TS, which focuses mainly on technology investments of between €2mn-10mn, says it has learnt that its fundraising pitch works better when it is based on the individual deals it is doing, rather than the overall regional picture. When 3TS showed potential investors that their portfolio companies make their revenue outside the region,  “they said ‘you are not at all exposed to Eastern Europe, now we get it’,” he recalls.

For these local mid-market funds, the widening sweet spot they will be able to operate in if the big regional funds die out – between the global giants and the small local venture capital funds – is mainly good news. But for local entrepreneurs – outside sexy sectors such as technology – it could mean lower valuations or no interest at all, particularly in the more frontier markets of Southeast Europe. “It’s very hard for [small CEE companies] to convince a global fund to invest in them,” Maki says.

“Private equity only really exists in some of the larger markets,” Andre Kuusvek, the EBRD’s director for local currency and capital markets development, told a panel discussion at its annual meeting. “There is a reduction of supply, there is more hesitance in approaching some of the markets.”

“There is money and there is investment needs, but they don’t meet,” he added. “I don’t see much PE interest in the region. You see the same names, the same destinations.”