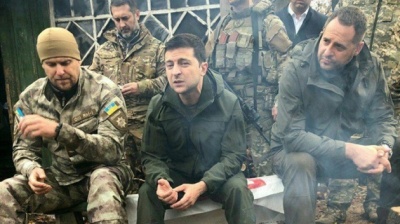 The Donbas ceasefire is crumbling slowly as both sides ramp up the tension in Ukraine's disputed region, but a return to a hot war is not expected.
By FPRI BMB Ukraine April 1, 2021

The ceasefire in Ukraine’s Donbas region has eroded in recent weeks. Last Friday, four Ukrainian soldiers were killed amid heavy fighting near Shymy in the Donetsk region as Russian-backed forces attacked Ukrainian lines (Kyiv Post). British and American officials responded by calling on Russia to uphold the ceasefire (Ukrinform) and end its aggression toward Ukraine.

On Tuesday, the Verkhovna Rada approved a statement demanding that Russia put an immediate stop to the hostilities (NV). That same day, the Kremlin’s spokesman said that Russia “sincerely hoped” that the tensions wouldn’t ramp up, adding that the violence is “cancelling out the modest achievements made earlier” (The New York Times).

While Kyiv sees the recent ceasefire violations as a clear escalation, this may not be a prelude to the return of full-scale hostilities. “Russia (mostly) and Ukraine [are] likely trying to provoke each other into committing ceasefire violations [and] maneuvering for leverage to break a stalemate,” wrote journalist Christopher Miller on Twitter. “[This] doesn’t mean return to hot war isn’t possible; but it’s also not inevitable.”

Researcher Sarah Lain argued that given the lack of progress in the Donbas peace talks, “there has been little incentive for things to remain calm.” That said, she also predicted that the hostilities “will continue to intensify, but remain localised ... Both sides have incentives to accuse each other of spoiling for a fight. Yet initiating a return to full-scale war would be very damaging for both sides,” Lain underscored.

At the same time, diplomatic tensions are also on the rise this week. Putin ruffled feathers on Tuesday by holding talks with French President Emmanuel Macron and German Chancellor Angela Merkel. According to the Kremlin’s readout, the three leaders had an “in-depth exchange of views on the situation in Ukraine” – notably in the absence of President Volodymyr Zelenskiy.

The Ukrainian President’s Office responded by underscoring that “decisions regarding Ukraine cannot be made and will not be made without Ukraine’s participation” (Ukranews). The talks between Putin, Macron and Merkel came after Zelenskiy announced plans to hold negotiations with all four Normandy Format leaders late last week (NV). (According to the Kremlin’s spokesman, Putin has no plans to speak with Zelenskiy, but this “can be organised very quickly” if need be).

In other Donbas-related news, the OSCE made a last-minute, unanimous decision to extend its Special Monitoring Mission to Ukraine for another year. Its mandate will now continue until March 31, 2022.

FPRI BMB Ukraine: Turning up the heat in the Donbas and Crimea
ASH: Ukraine, ask yourself what Putin wants
MOSCOW BLOG: It’s time for a new pan-European security treaty