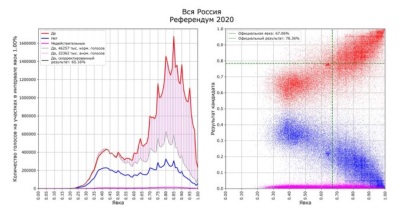 Mathematicians studying the voting patters in Russia’s referendum to change the constitution that closed on July 2 have concluded some 22mn extra votes were added to the count by the Kremlin
By Ben Aris in Berlin July 3, 2020

As bne IntelliNews reported before the vote began that Russian statistician Sergey Shpilkin has made a name for himself by highlighting vote rigging in past elections in Russia by studying the mathematical distribution patterns. Shpilkin found serious discrepancies in the number of people that had registered to vote online, even before the polls were opened.

Russia’s new constitutional amendments passed with 77.92% of votes in favour and 22.27% against. Both turnout and popular support for the amendments to the constitution were higher than when Russians voted to adopt the current Constitution itself in 1993.

Once again, Russia’s highest numbers were reported in Chechnya, where 97.92% of voters supported the amendments amid turnout of 95.14%. Federal election officials initially reported a “protest vote” in the Komi Republic, but the results later reversed as more ballots were counted.

The voting in Russia’s constitutional plebiscite fell short of both Russian and international standards, says the independent watchdog “Golos.” According to the movement’s experts, campaigning ahead of the vote, ballot processing and ballot counting all violated multiple norms.

Golos broke the problems down into four major categories: the lack of a legal framework for the vote; the problematic formulation of the question; the Central Election Commission and government agencies campaigning in support of the amendments; and forced voting and the falsification of votes.

Asked how the Kremlin views the results, presidential spokesman Dmitry Peskov called the plebiscite a “triumph.”

“It was easy to predict high interest in these amendments,” Peskov said. “But, of course, the incredible turnout and level of support now confirmed today was in fact very hard to anticipate.”

Now the vote is over Shpilkin has produced a study of the results which bear the tell-tale spikes around the numbers 0 and 5. Election officials charged with beefing up vote counts to reach a goal set by the Kremlin have the very human habit of rounding up the vote to the nearest five or zero. But as voting patterns are supposed to produce a random distribution of numbers, that means there are too many results at the zero and five mark, easily seen with the naked eye as a spike.

The result of the Russian referendum vote bears those hallmark spikes and Shpilkin estimates than additional 22mn votes were injected into the count to get the desired result and the true turnout was 42%, not 65%. 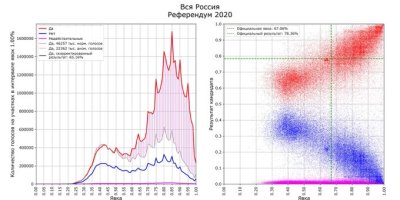 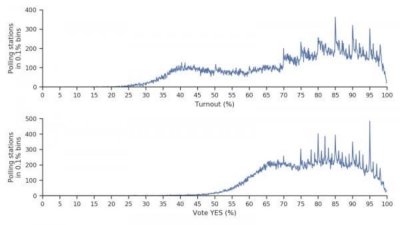 Another mathematical oddity of the result is that the "for" vote was 78% with a 65% turnout (both numbers are suspected to have been inflated) but 68% of 78% is 50.7%. In other words, just over half of Russia’s entire population voted for the constitutional changes – an absolute majority of the citizenship.

This is not the first time this has happened. In the 2018 presidential election Putin won a landslide 76.69% of the vote with a 67.54% turnout. That means Putin won the votes of 51.8% of all Russians in another election where there was substantial reported vote rigging.

Another study that looks at how the voting patterns change with the local turnout found in fixed elections the higher the turnout is, the most likely the vote will be for the government. In free and fair elections the votes are evenly distributed around the centre of the chart, whereas in fixed elections the pattern is pulled into the top right hand corner. (Higher support for a leader is plotted on the y axis, higher turnout is on the x axis.)

In Russia this study found that not only is the voting pattern dragged to towards the top right hand corner, but in that corner there is a second intense pattern of voting. This corresponds to the difficult to explain 100% vote for Putin that several republics in the Caucasus reported in the last presidential election – and in some cases like Chechnya the official result was even over 100%. 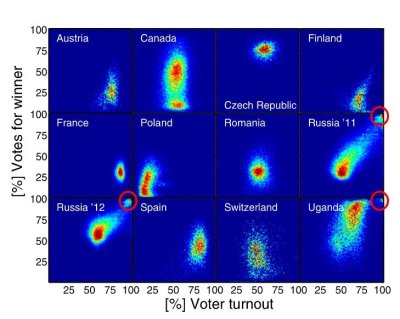 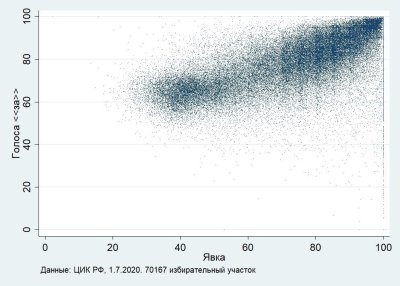 At a more mundane level opposition groups that carried out their own independent exit polls found that in contradiction to the official results, the majority of Muscovites and St Peterburgers voted against the change to the constitution.

At the Russian consulate in London, Russians participating in the vote resoundingly rejected the motion to change the constitution, with 80.5% voting "no" and only 19.3% voting "yes."

According to the official results, the only region inside Russia to vote against the motion was the Nenets Autonomous Okrug on Russia’s icy far northern coast, which only has 44,000 inhabitants.

Some have claimed that the referendum is Russia most rigged vote to date. Certainly it is clear the authorities were heavy handed in their efforts to get the result they wanted. Shpilkin’s estimate of an extra 22.4mn votes injected into the count is more than double the extra 10mn votes that are believed to have been injected into the 2018 presidential race.

The European Union has called on Russia to probe reports of irregularities in a national, non-binding plebiscite that approved a sprawling package of constitutional amendments.

"We are aware of reports and allegations of irregularities during the vote, including voter coercion, double voting, violation of secrecy of the vote, and allegations of police violence against a journalist who was present to observe," EU spokesman Peter Stano said. "We expect these reports to be duly investigated, because these are serious allegations," Stano added.

Ella Pamfilova, head of the commission overseeing the vote, said balloting had been transparent and there was no evidence of vote rigging.

Anti-corruption blogger and opposition activist Alexei Navalny lambasted the vote and called for protests once the coronavirus restrictions are removed.

"The just-announced 'results' are a fake and a huge lie," Navalny wrote in a blog post on July 1. "They have nothing in common with the opinions of the citizens of Russia. We have witnessed a show, the ending of which was scripted in advance."