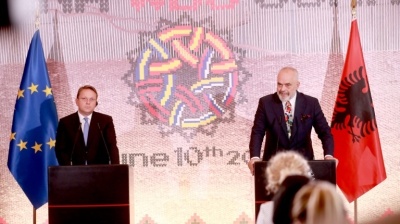 EU Enlargement Commissioner Oliver Varhelyi announced on June 10 that the European Commission will extend an IPA-III economic and investment plan amounting to nearly €30bn, or a third of the region's GDP, to the Western Balkans.

Speaking after the Western Balkans leaders meeting in Tirana, Varhelyi said the project would mobilise nearly €9bn and had the potential to raise investment of up to €2bn between 2021 and 2027.

However, Varhelyi added that the plan would not be effective unless the six countries that make up the EU-aspiring region work together.

“We are ready to reconfirm our commitment and commitment that we have put on the table with the economic and investment plan, a plan which we have shown since the autumn that mobilises one third of the region's GDP, i.e. almost €30bn in the form of investments to come to the region,” said the commissioner, according to a transcript on the Albanian government website. According to Varhelyi, an agreement was reached at the beginning of June to fund the plan.

“But this plan is not going to work if the region itself does not function as a whole,” Varhelyi added. If we do not have a regional market, it makes no sense to build highways in case all the big vehicles stop at … borders every 100 kilometres. It does not make sense to work more for these railways if the trains also encounter difficulties, or new trade routes if there will have to be six different types of freight certificates or different taxes for these types of freight.

The plan was welcomed by political leaders from the region, with Albanian Prime Minister Edi Rama saying it will all result in “fundamental improvement” of the region’s road, railway and port infrastructure, as well as interconnectivity, energy sector and digitalisation.

Rama, who hosted the meeting, also talked of steps towards regional co-operation, including the so-called “mini Schengen” area launched by Albania, North Macedonia and Serbia.

Another achievement is the agreement on free mobile roaming among countries in the region, due to come into force on July 1.

“This is really a great achievement and there will still be great things, such as citizens being able to move around with ID cards, identity cards, recognition of diplomas, revocation of work permits, so all these things together will make co-operation in the Western Balkans offer many things to the citizens of the Western Balkans, including online commerce,” said Varhelyi.

The commissioner called June a “crucial month” for the region, and said the EC wishes to hold intergovernmental conferences with Serbia and Montenegro, as well as with Albania and North Macedonia; the latter two states failed to progress to the start of accession negotiations at an EU summit in late 2020.

But while the emphasis from Varhelyi was on regional co-operation, it emerged that the prime ministers of Serbia and Kosovo had clashed during the summit.

Serbian Prime Minister Ana Brnabic told reporters after the summit that it was "more difficult than she expected” and that “she tried to focus on good results and co-operation in the region, but that someone else [Kosovan Prime Minister Albin Kurti] moved the conversation to the field of politics”, a statement on the Serbian government website said.

“In today’s #WB6 summit in #Tirana I said that we need to upgrade and accelerate membership into #EU. To this end we need to change the current framework of co-operation where Kosova is continuously treated unjustly & unfairly. I proposed we establish a new agreement called SEFTA,” Kurti tweeted after the meeting.

“SEFTA (South East European Free Trade Agreement) would be modelled on the current EFTA-EEA Agreement with similar structure but with direct involvement of EU to ensure that all members comply with the agreement to have a common market that works fairly and justly.”