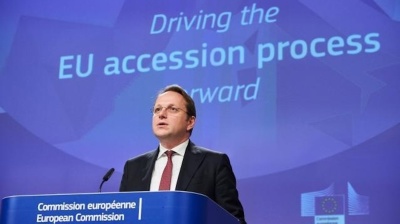 By Valentina Dimitrievska in Skopje February 5, 2020

The European Commission presented a new enlargement methodology on February 5 with the aim of better supporting reforms in potential members of the European Union through the clustering of chapters, clearer criteria, and a stronger political steer.

The new plan was initiated by France after the French President Emmanuel Macron vetoed the start of EU negotiations with North Macedonia and Albania last October, seeking a new approach to the enlargement process.

The new methodology titled “Enhancing the Accession Process — A Credible EU Perspective For The Western Balkans” will apply for North Macedonia and Albania and future applicants. Montenegro and Serbia, which are already holding negotiations with the EU, will have to decide if they want to accept negotiations under the new methodology.

The new approach is intended to make the EU accession process more credible, more dynamic and predictable, according to European Commission officials.

EU Enlargement Commissioner Oliver Varhelyi said on February 5 that EU enlargement to the Western Balkans is a top priority for the Commission.

Varhelyi explained that the European Commission is working on three tracks: concrete steps on how to enhance the accession process, opening accession negotiations with North Macedonia and Albania, and proposing an economic plan for the region during the upcoming May summit in Zagreb.

The Commission noted that credibility in the process should be reinforced through a stronger focus on fundamental reforms, starting with the rule of law, the functioning of democratic institutions and public administration as well as the economies of the candidate countries.

“When partner countries meet the objective criteria, the member states shall agree to move forward to the next stage of the process, respecting the merits-based approach,” the document said.

Under the new methodology, member states should be involved more systematically in monitoring and reviewing the process.

“Negotiations on the fundamentals will be open first and closed last and the progress on these will determine the overall pace of negotiations,” it said.

To encourage demanding reforms, the Commission will better define the conditions set for candidates to progress and will provide clear and tangible incentives of direct interest to citizens.

The more candidates advance in their reforms, the more they will advance in the accession process. Conversely, the Commission proposes more decisive measures sanctioning any serious or prolonged stagnation or backsliding in reform implementation.

The Commission hopes EU members will accept the proposal in parallel with the opening of accession negotiations with North Macedonia and Albania, ahead of the EU-Western Balkans Summit in Zagreb on May 6-7.

For Bosnia & Herzegovina and Kosovo, which do not yet have candidate status, the Commission says that the Stabilisation and Association Process remains the common framework of relations.

The EU welcomed the appointment of the new Bosnian government and underlined it is ready to work with the authorities on the implementation of the 14 identified priorities, paving the way towards candidate status.

For Kosovo, the Commission said it is important that the new government resumes work on reforms, including the implementation of the Stabilisation and Association Agreement (SAA).

“The Commission looks forward to working with the new government in Kosovo and to assisting in its European Reform Agenda, focusing on strengthening the rule of law, public administration and the economy,” the Commission said.

It also underlined that it is important that Kosovo abolishes the 100% tariffs imposed on imports of Serbian and Bosnian products and renews its engagement in regional initiatives and cooperation.

LONG READ: The Growers - a handful of countries in New Europe are coping with the coronacrisis and are still expanding
New coronavirus cases decline across emerging Europe but the epidemic’s not over yet
Tensions between Bosnia, Montenegro and Serbia rise over closed borders