The Dordoi bazaar in Kyrgyzstan’s capital Bishkek is buzzing ahead of the October 4 elections for the Jogorku Kenesh, the Kyrgyz 120-seat unicameral parliament.

Cart pullers scream to make their way through the crowd with their heavy loads. Customers lose themselves in the infinite turns of what is one of the largest bazaars in Central Asia, and the smell of samsas [samosas] and kebabs fills the corners where customers and sellers come together for a quick bite.

Dordoi has long been the symbol of Kyrgyzstan’s re-export economic model – cheap goods are imported from China and Turkey and resold to the whole of Central Asia and Russia, in a trade that involves thousands of traders and generates big flows of customs duties for the state.

But all is not well in the bazaar these days. The economic slowdown and the country’s entry into the Russia-led Eurasian Economic Union (EEU) have depressed trade and put in jeopardy hundreds of jobs at Dordoi. Traders are now bracing for elections amid a mixture of hope and uncertainty.

“I hope that the Jogorku Kenesh will manage to lower the tariff and thus bring down import costs,” Askar, a trader selling imported suits to foreign customers, mostly from Kazakhstan, tells bne Intellinews, pointing out that import duties on a single suit grew to $10 from $3 when the country joined the Russia-led Eurasian Economic Union.

Kyrgyzstan is holding its second elections under the rules introduced in 2010, when civic unrest led to a new constitution that created a parliamentary republic. More than 2.7mn citizens registered through a biometric system are expected to show up at the polling stations this weekend.

They will have to choose one from 14 running political parties, many of which resulted from last-minute coalitions between existing parties.

Three major forces are likely going to dominate the Jogorku Kenesh. The Social Democratic Party (SDPK), which has been the main backbone of the ruling coalition over the past five years and has in serving President Almazbek Atambayev its natural leader; Respublika-Ata Jurt, a coalition that emerged from the unlikely marriage of convenience between the relatively liberal approach of the former with the nationalistic stance of the latter; and the nominally social-democratic party Ata Meken.

Whatever the outcome, the incoming Jogorku Kenesh will have to breathe new life into the country’s ailing parliamentary system.

The first five years of the Jogorku Kenesh under the parliamentary system have hardly been a success. In fact, as many as eight prime ministers have alternated since the 2010 elections, making effective parliamentary government impossible. With the Jogorku Kenesh unable to fulfill the potential the constitution granted it, the presidency, namely Atambayev, kept most of the governing powers.

Yet, Sariyev argues the system has achieved some success by simply breaking with the past.

The new Jogorku Kenesh will be called to build up on this by addressing some of the country’s most urgent issues. However, political parties remain dominated by corrupted political elites that have showed little ability when it comes to governing the country, something that has not gone unnoticed among the voters, including at the Dordoi bazaar.

“Parliament is full of businessman, but a lot of them who come from villages have the money but don’t have the education to be proper candidates, they just think of grabbing a seat in parliament,” says Salima, a clothes trader, describing the party machines that tend to favorite candidates on the basis of the resources they can bring to the table rather than popularity or ability.

Their political campaigns have therefore been empty and populist, lacking substance and coherence at a national level, or even coherence within the same party, and barely feature any of the major issues the country is facing, such as the way the economy and trade are slowing down despite the som trading at historic lows.

“These parties are not based on ideologies or political platforms, but rather they all focus on promising cheap solutions to minor, mostly local problems,” says Ainura Usupbekova, head of Taza Shailoo, an NGO that is deploying around 850 observers across the country to monitor the elections.

Another concern is that, despite the country’s relatively liberal environment in comparison with its neighbours, a number of government initiatives have recently restricted human rights, namely a ban on “gay propaganda” and a law highly constraining the room of manoeuvre of “foreign agents” working for NGOs and other international organizations.

The country’s minorities are also feeling the pressure of the growing nationalistic sentiment.  The Uzbek minority, which fell victim to the ethnic fury that burst out in the southern province of Osh in 2010, remains largely unrepresented in democratic institutions despite numbering about one million members.

“Lack of reform has fostered an environment that excludes ethnic minorities, youth and the religiously devout from mainstream political participation, while allowing Kyrgyz nationalism free rein to dominate,” says a report from the International Crisis Group.

The 500,000 Kyrgyz migrants working in Russia have also largely remained on the sidelines of the elections process, as only 11,000 of them registered, according to government figures.

In foreign affairs Atambayev is increasingly flirting with Russia, whose influence over domestic affairs has been reinvigorated by the country’s highly debated entry into the Eurasian Economic Union.

Last but not least, there are mounting concerns over a radicalization of parts of the Muslim communities.

Among the competing parties this weekend, Dordoi itself has its champion of democracy in the Emgek party, which is chaired by Askar Salymbekov, the owner of the bazaar, which is now running in coalition with the Butun Kyrgyzstan party. The party’s programme features the promise of lower taxes on the bazaar traders to counter the impact of increasing tariffs for non-EEU imports.

“Will things get any better with the new legislature?” wonders Rakhat Ali, another clothes trader at Dordoi. “Inshallah!” [God willing!].

Kanat Shaku contributed to this story 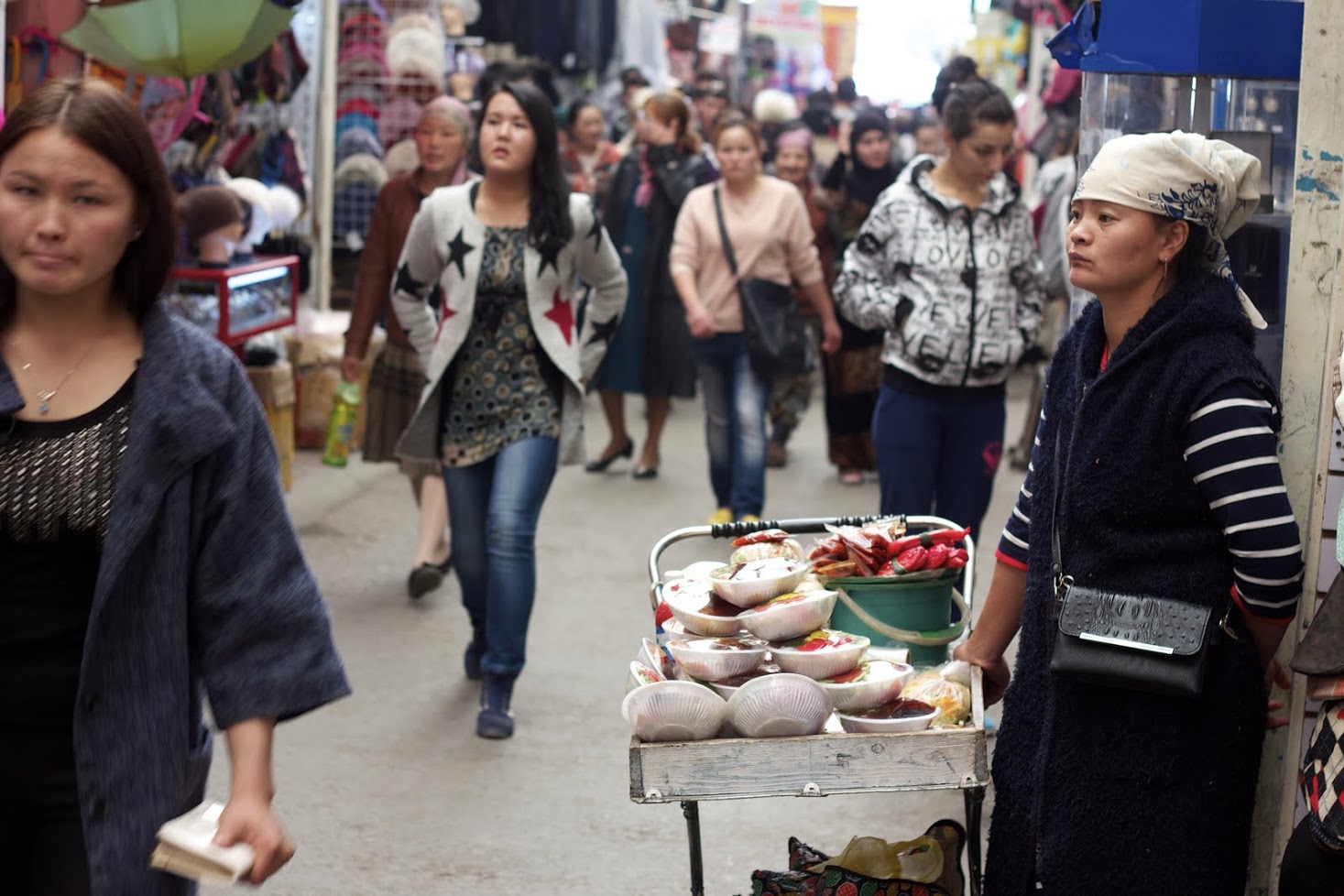