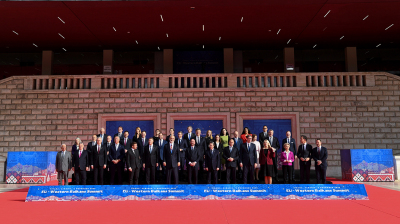 EU leaders called for the accelerated accession of the Western Balkans countries to the EU as they sought to reassure the six countries in the region that their future is inside the bloc at a one-day summit on December 6.

The first EU summit organised outside the bloc — in the Albanian capital Tirana — took place almost 10 months after Russia’s invasion of Ukraine. The invasion reignited the enlargement process, as EU leaders sought to counter Russian influence in the Western Balkans.

In the declaration adopted at the summit, the EU “reconfirms its full and unequivocal commitment to the European Union membership perspective of the Western Balkans and calls for the acceleration of the accession process”.

“This is the first [summit] in the Western Balkans region ... the first time the leaders of the EU and the Western Balkans have been at the same table,” he said, addressing the press conference alongside European Commission President Ursula von der Leyen and the event’s host Albanian Prime Minister Edi Rama.

The declaration “is really important because it … contains some concrete commitments that are additional to the accession process,” Michel continued.

Reiterating the comment he made at the start of the day, Michel added: “The future of our children will be safer and better with the Western Balkans countries being part of the EU.”

At the same time, the aspiring EU members from the Western Balkans restated their commitment to EU values such as democracy, the rule of law and the fight against corruption and organised crime.

There was also an appeal to the Western Balkans states that have not already done so to align with the EU’s foreign policy — a message directed at Serbia, which has refused to impose sanctions on its old ally Russia.

“Standing together with the EU is a clear sign of partners' strategic orientation, now more than ever, as Russia escalates its war of aggression against Ukraine,” the statement said.

“A common vision of the future involves mutual responsibilities and shared values. As we deepen our cooperation with partners, we urge them to make swift and sustained progress towards full alignment with the EU Common Foreign and Security Policy (CFSP) and to act accordingly, including on EU restrictive measures,” it added.

“The Western Balkans have decided to embark on the European path, this is a two-way street," said EU foreign policy chief Josep Borrell at the start of the event.

“[W]e also expect the region to deliver on key reforms, and certainly to show the will to embrace the European Union's ambition and spirit. Many do, but we see also hesitations."

Serbia has so far refused to join international sanctions on Russia despite pressure from the EU to fall into line with the bloc’s foreign policy, though it did back UN resolutions condemning the invasion of Ukraine.

Prior to this year, the level of enthusiasm for accession of the Western Balkans had been mixed, with some member states considering that other Southeast European countries, notably Romania and Bulgaria, were admitted to the bloc too soon, and not wanting to repeat the same mistakes with the considerably poorer Western Balkans countries.

The slow accession process and what was seen as a lack of will to expand to the Western Balkans on the part of many EU politicians led to a disillusionment with the process in the region, and, in some cases, backsliding on democratic reforms as the prospect of membership looked increasingly elusive.

That changed with the Russian invasion of Ukaine, as ensuring European security and countering Russian influence in the region meant enlargement became a priority.

Not only did Albania and North Macedonia get the long-awaited nod to start accession talks, the EU also gave candidate status to Ukraine and Moldova earlier this year.

Currently four of the six Western Balkans countries are candidate counties, with Montenegro and Serbia the most advanced in the negotiation process.

Kosovo’s President Vjosa Osmani-Sadriu reiterated the country’s plans to apply for EU membeship, even though five EU countries do not yet recognise Kosovo as independent. She also called for concrete action from Brussels, saying as she arrived at the summit: "We need the EU to move from words to deeds."

As the energy crisis, and the related cost of living crisis, worsened, the EU stepped up its support for the Western Balkans. This autumn it committed €1bn in grants to support the region through the crises.

“We are strongly committed to support [the region] to face the consequences of the war [in Ukraine],” Borrell told journalists as he arrived at the summit.

“Electricity prices have gone up and we are going to give important financial support to the households.”

An agreement to reduce data roaming changes between the EU and the Western Balkans countries from October 2023 was signed at the summit.

Another topic discussed was migration, amid a sharp increase in attempted entries to the EU from the Western Balkans, with the number nearly tripling year on year in October, according to Frontex.

The day before the summit, the European Commission presented its action plan to help the Western Balkans deal with rising migration. The measures are intended to strengthen cooperation on migration and border management with the six Western Balkans countries.

Serbia in particular has been under pressure to align its visa policies with the EU, as at present nationals of some countries that do not require a visa to visit Serbia travel to the Balkan country then manage to move across the border into EU countries.

The summit took place after a serious worsening of relations between Serbia and Kosovo in recent weeks, after Pristina sought to impose controversial new rules for car number plates. The spat prompted a mass walkout of Kosovan Serbs from state institutions.

Borrell warned at the time that there was a risk of the situation escalating into a new conflict. Following intense diplomatic efforts, the crisis was averted. However, the row was reignited this month after opposition ethnic Serb politician Nenad Rasic was made a minister in the government of Kosovo’s PM Albin Kurti, prompting Serbian President Aleksandar Vucic to say he would not attend the summit in protest against the EU’s lack of action.

Despite this, Vucic arrived at the summit. Highlighting the importance of the event, the Serbian president announced his U-turn on December 5, saying that failing to attend would cause “great harm” to Serbia.

Borrell also commented on the dialogue between Serbia and Kosovo on December 6, saying “this is an important moment”. “The dispute about licence plates is over. Now they have to re-engage,” he added.