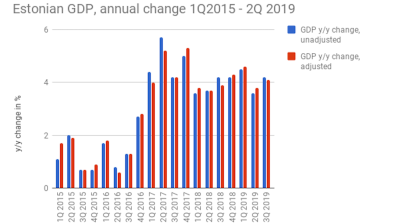 The pick-up in economic expansion in the third quarter arrived on the back of investment growing 8.1% y/y. That said, investment growth slowed down as many as 16.3pp compared to the annual gain in the previous three months.

“In the context of the deteriorating external environment and sharply worsened economic sentiment in Estonia, the strong result of economic growth is surprising in a good way,” Swedbank said.

Overall, Estonia’s domestic demand growth came in at 3.9% y/y in the third quarter, impeded to an extent by a slowdown in household consumption, which expanded just 1.2%. The corresponding figures were 5.7% y/y and 1.1% y/y, respectively, in the second quarter.

The European Commission currently forecasts the Estonian economy to grow 3.2% this year. That is an upward revision of 0.4pp versus the previous outlook. Swedbank also hints at revising its autumn forecast for Estonia again, from the current outlook of 3.2%. SEB forecasts growth of 3%, up from 2.8% expected earlier this year.

In terms of sectoral contribution, information and communication proved the top segment. Professional, scientific, and technical activities, agriculture, forestry, and fishing, wholesale and retail trade, and manufacturing also contributed positively, on top of five other segments.

Electricity, gas, steam and air conditioning supply impeded the third quarter’s growth the most, data showed. Construction and mining and quarrying also dragged down on the economy.

The Russian Ministry of Finance announced on March 19 that it has transferred last year's budget surplus to the National Welfare Fund (NWF), which now amounts to about RUB12,200bn ($157.2bn), or 11% of GDP

No one knows if there will be a summer tourism season at all in 2020, which is bad news for the countries that generate around a quarter of their GDP from the sector.

Economic consultancy Capital Economics has slashed its growth forecast for the Central and Eastern Europe (CEE) to a 2% y/y contractions from the previous 2.3% expansion in 2020, as a result of the coronavirus.

Cases have doubled in less than three days in several countries in the region, as governments desperately fight back with lockdowns.

Russia's National Welfare Fund steps up again to $12.2bn, or 11% of GDP, in March
1 day ago
Small countries in Balkans and South Caucasus most exposed to tourism industry collapse
2 days ago
Capital Economics slashes CEE growth forecasts for 2020 to -2% y/y
3 days ago
Coronavirus epidemic approaches exponential growth stage in some CEE countries
3 days ago
Ukraine industrial output falls 1.5% in February
3 days ago