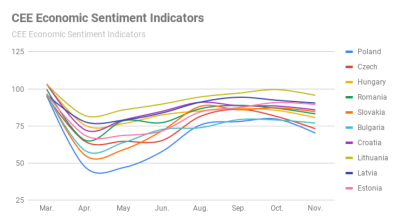 Capital Economic's GDP-weighted measure for Central & Eastern Europe (CEE) fell sharply from 83.2 in October to 76.7 in November, though it remained comfortably above its trough of 58.8 in April.
By bne IntelliNews November 30, 2020

Capital Economics' economic sentiment indicator took a step down in November after a broad-based recovery since April across Central and Eastern Europe (CEE), the consultant said in a note on November 27.

Capital Economics says it now expects the recovery that has been driven by the easing of restrictions at the end of the summer to falter in the middle of this quarter.

“The headline ESIs fell in all of the ten economies that we cover. The biggest fall came in Poland (see Table 1) and the indicator also declined sharply in the Czech Republic, which is likely to reflect the tough lockdown measures imposed there. The Baltic States and Bulgaria escaped with only modest falls,” Bethany Beckett, an economist with Capital Economists, said in a note. “Our GDP-weighted measure for Central & Eastern Europe (CEE) fell sharply from 83.2 in October to 76.7 in November, though it remained comfortably above its trough of 58.8 in April. On past form, the ESI suggests that the recovery in regional GDP went into reverse in Q4.”

The results of the ESI tally with those from the IHS Markit PMI index that showed services in particular in the region were slowing as the winter draws in.

“At first glance, the size of the falls appears to reflect the relative stringency of the virus containment measures imposed, with Slovakia, Poland and the Czech Republic suffering the sharpest declines in services sentiment. But it is noteworthy that sentiment also slumped by a similar extent in those countries that have so far avoided harsh restrictions on services sectors, including Romania and Hungary,” said Beckett.

The changes in the manufacturing ESI were more mixed, with the index improving in Slovakia and Estonia but deteriorating in Hungary, Czechia and Poland. In general, services have been more hurt than industry, according to Capital Economics.

The survey was concluded on November 20 and doesn't capture the latest round of restriction easing, which means the index results could be improved next month, says Capital Economics.

Romanian construction companies' activity slows in November after intense 2020
7 hours ago
75% of Montenegrins want EU membership
1 day ago
North Macedonia's manufacturing confidence indicator down by 8.5 pp y/y in December
3 days ago
Romania’s industrial recovery paused in November
4 days ago
Labour demand down 28% y/y in Croatia in 2020
4 days ago