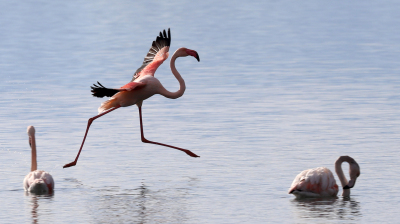 More than 200 wild bird species have been recorded in the area where the airport is planned.
By Clare Nuttall in Glasgow March 18, 2021

Environmental groups say they will step up their efforts to prevent the construction of a new international airport in a protected wetland area near Albania’s third-largest city, Vlora, after the government awarded the concession to build the airport to a tie-up between Mabetex Group and Turkey’s YDA.

Albania currently has only one international airport in operation, Mother Teresa International Airport in the capital Tirana. The government wants to open several new airports to help the development of the tourist sector.

After reconstruction, the long-idled airport at Kukes, just under 100 km from Tirana, is close to re-opening to serve budget airlines. Test flights were carried out at the airport on March 3 and its director Altin Progonati said the terminal is 80% completed, while other works are progressing at a fast pace.

Vlora is set to become the third international airport to open in the country and government officials have also mentioned the possibility of building a fourth and fifth airport at Saranda in the south of the country and Korca in the Morava mountains close to the Greek border. These will help bring visitors directly to tourist destinations, currently accessed via long bus journeys from Tirana airport, as services on Albania’s run-down railways operate sporadically and neither Saranda nor Korca are connected to the railway network.

“We have often talked about the need for other airports on [Albanian] territory, but it always seemed like a distant dream, which would take a long time to be realised, but … within the next four years we anticipate starting two more airports … thus concluding a strategy with five airports in the territory of Albania spread across the north, centre, south and east,” said Energy and Infrastructure Minister Belinda Balluku during a visit to Kukes airport on March 3.

However, the plans have run into controversy. As well as the opposition to the planned Vlora airport on environmental grounds, the government’s decision to extend the concession for Tirana airport sparked an angry reaction from the opposition and President Ilir Meta, who accused the ruling Socialist Party of rushing it through with insufficient scrutiny ahead of the April general election.

Earlier this year, a large group of Albanian and international NGOs appealed to the government to scrap plans to build the new airport in the Vjose-Narte Protected Landscape area, in an open letter to Prime Minister Edi Rama.

“While we appreciate initiatives from the Albanian government that aim at investments that give a huge contribution [to the] socio-economic development of our country, we are deeply concerned about the actual location of the project, as the construction of an airport there would irreversibly damage the ecosystem of ‘Vjose-Narte Protected Landscape’,” said the letter from the 36 NGOs.

“Such an investment would bring about uncontrolled and unsustainable development models that would irreversibly damage the natural values and resources of the area.”

The letter stressed that the Narta Lagoon and the surrounding ecosystem “represent one of the largest and most important wetland ecosystems of Albania and the Mediterranean”. More than 200 wild bird species have been recorded in the area, including eight that are critically endangered. The area is an important breeding site, and part of the Adriatic Flyway, where hundreds of thousands of birds forage and take shelter when migrating.

This poses a danger to humans too; the NGOs warn that some of the bird species seen in the area – among them pelicans, herons, gulls and flamingos – are big enough that “potential collision with airplanes could bring tragic consequences”. “Cases of airplane malfunctions or even crashes caused by the collision with wild birds are well documented. This fact strongly dictates that Vjosë-Narta is an inadequate location for this large public investment,” says the letter.

It goes on to argue that moving forward with the project in the current form “creates obstacles on the integration path of our country in the European Union, which has been the main aspiration of Albanians in the last 30 years”.

NGOs contacted by bne IntelliNews said they had not received an official response to the letter, though questioned by journalists on the issue Minister of Tourism and Environment Blendi Klosi dismissed the criticisms as a “fake debate”.

Meanwhile, the government has pressed ahead wth the project. After several failed tenders, it finally picked Lugano-based Mabco Constructions – set up by Kosovan businessman Behgjet Pacolli’s Mabetex Group with a 50% stake, Turkey’s YDA Group (48%) and 2A Group LLC (2%) – to build the airport under a 35-year concession. Work is expected to start this year and take three years to complete.

Representatives of two Albanian NGOs told bne IntelliNews that they would continue their campaign.

"The coalition of NGOs is determined. We will do everything possible in targeting this case,” said a spokesperson for Birds of Albania.

“This is the most serious threat to natural heritage in Albania since the post drainage times after the Second World War that [caused] some great wetlands in the country [to vanish]. The case is extremely dangerous as a precedent. If we allow such massive infrastructure to be built and consequently destroy a Protected Area, the same can be repeated in all [Protected Areas] in Albania and we risk [losing] more of them in the future, particularly the wetlands that are the rarest ecosystems in Albania composing less than 1.7% of the country’s territory.”

Outlining future plans, the Birds of Albania spokesperson said: “Now we are focused on seeking international support, considering that we were ignored by our country's authority. Based on the need, we will also raise the case on the court.”

Taulant Bino of the Albanian Ornithological Society said there were still hopes of influencing the plans to build the airport. The NGO is currently engaged in an advocacy campaign mostly through mass media and social platforms. Bino added that future actions could comprise "everything including judicial litigations”.

There have also been criticisms of the deal on economic grounds as more details have emerged. Mabco will invest €103.9mn to build the airport, NGO officials say the contract states that the project is considered high risk as it is being built from scratch and it is impossible to predict traffic. Therefore the Albanian government will assume a “revenue guarantee”, which means they will compensate the winning consortium if the airport fails. In total, should the airport fail or not meet expectations, Albanian taxpayers will end up paying €138mn to the consortium.

Bino also noted that there has not yet been a full environmental and social impact assessment, only a preliminary feasibility study.

Mabetex previously planned to build a huge tourist resort in the Divjaka-Karavasta National Park, another highly important area for birds; it includes the Karavasta lagoon that has been recognised as a wetland of international importance under the Ramsar Convention. The planned resort was met with fierce resistance from environmental groups and local officials, leading the government to withdraw from the project.

The campaign against the plans for Vlora airport come at the same time as a dispute between government and opposition over the extension of the concession for Mother Teresa International Airport.

Earlier in March, Meta vetoed the extension of the concession, but his veto was later overturned by the parliament, where the Socialists have a majority.

It was announced that the concession would be extended by 13 years two months after Albania’s Kastrati Group bought the airport’s operator in December. Kastrati proposed a package of investments worth around €100mn, with the money to be spent on expanding the airport's capacity by 6mn passengers per year, a runway extension, complete improvement of the airport infrastructure and significant improvement of service quality, the company said on January 28.

On rejecting the law, Meta said the legislation and the additional concession agreement “have the highest level of unconstitutionality and, unfortunately, of ‘legislative corruption’ in the government and the one-party assembly”.

“This phenomenon, i.e. ‘legislative corruption’, has become the new means of covering the 'clientelistic' benefits of funds and public property, where for every benefit donated, they adopt a law to legislate it,” Meta said in a statement posted on the presidential website.

He argued that the law had been rushed through the parliament. “The reason is very simple, hiding from the public eye this procedure is completely unconstitutional, scandalous and illegal,” he claimed.

The upcoming election will pit Prime Minister Edi Rama’s Socialists – which are leading in the polls – against the two main opposition parties, the Democratic Party and the Socialist Movement for Integration (LSI), the latter led by Meta’s wife Monika Kryemadhi after he resigned from the party on becoming president.