Czech unemployment rate down to 3.3% in November 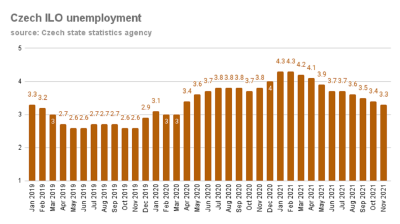 Czech unemployment in November up by 3.3%
By bne IntelliNews December 9, 2021

Czech unemployment fell to 3.3% in November, down from 3.4% recorded in October, reported the Czech Labour Office on December 8.

"The whole EU can envy us such low unemployment. We are still at the top and we want to stay there. For example, this is why we reactivated the [COVID-19 employment support] programme Antivirus in November, which in previous pandemic waves in previous years functioned well and protected over one million jobs." commented Minister of Labour and Social Affairs Jana Malacova.

The labour authorities registered 245,549 job seekers, going down by 6,100 month-on-month and almost by 29,000 year-on-year, when the unemployment rate stood at 3.8%. The number of offers by employers reached nearly 345,000 jobs, thus there were 0.7 applicants per vacancy.

"The development of unemployment in November depends to a large extent on the weather, i.e. to what extent it will allow construction work to continue. This autumn was generally above-average in terms of temperature and thus favourable for outdoor construction work, which was also reflected in the unemployment rate," said Jakub Seidler, chief economist at the Czech Banking Association, to the Czech News Agency.

"The labour market is favourably affected by the continued growth of the Czech economy and the demand for employees from companies across all sectors of the domestic economy," said Radomír Jac, chief economist at Generali Investments CEE.

The end of the year and the beginning of the new year should be influenced by seasonal factors pushing unemployment to a temporary month-on-month increase, he added.