Czech PMI falls to its lowest level since December 2012 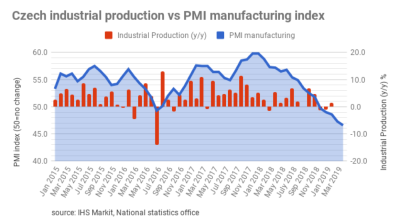 The Czech IHS Manufacturing Purchasing Managers Index (PMI) dropped to 46.6 in April from 47.3 in March
By bne IntelliNews May 9, 2019

The Czech IHS Manufacturing Purchasing Managers Index (PMI) dropped to its lowest level since December 2012, printing 46.6 in April from 47.3 in March, driven by a strong decline in client demand, despite the firms increasing their factory-gate prices solidly, according to a report from IHS Markit published on May 2.

The output levels have continued to contract, posting the fifth successive monthly fall in production. Output charge rises slowed down, too, nevertheless remained solid. The firms reported a strong drop in new orders and domestic demand. They also registered weak foreign demand. The increase in input prices, driven by higher raw material and energy cost, was the slowest since November 2016.

“Czech manufacturers reported further difficulties at the start of the second quarter of 2019. Domestic and foreign demand conditions continued to weaken, with new order volumes contracting for the sixth successive month. Although still expected to remain in growth territory, industrial production is currently forecast to grow by 2,” said the Economist at IHS Markit Sian Jones. Industrial production expanded by a weak 1.5% in February, the latest data available.

Lower demand led to another decrease in employment month-on-month in April, which contributed to lower level of new orders and a lack of skilled workers.

“The knock-on effects of less robust demand were evident in the fastest fall in employment since November 2009 and back to-back decreases in outstanding business. Manufacturers also remained subdued in their output expectations towards the year ahead, amid weaker demand conditions across Europe and a tight labour market,“ Jones added.

The firms expressed a slightly higher level of optimism in April, with manufacturers expecting a renewed increase in new business over the coming year, with concerns about labour shortages and weaker demand from European clients.

Russia's services PMI bounces back to 35.9 in May from a record low of 12.9% in April, but business still contracting
4 hours ago
Easing of lockdowns offers hope to emerging Europe’s COVID-struck economies
1 day ago
Kazakh manufacturing ekes out PMI expansion in May
1 day ago
A third of Russians are ready to participate in a mass protest against falling living standards
1 day ago
Romanian banks post 9% y/y smaller profit in Q1
1 day ago