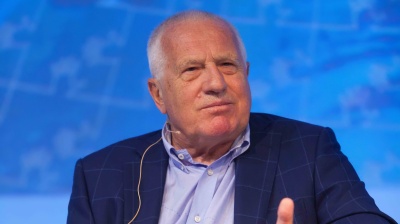 The Czech post-revolutionary finance minister (and later Czech president) Vaclav Klaus allegedly fulfilled a loan contract concluded by the head of the Czech communist government, Ladislav Adamec, with the Soviet Union just before the Velvet Revolution that brought the Communist reign to an end, and sent around $1.3bn to the Russians (one third of the total Russian debt to Czechia), daily Hospodarske Noviny (HN) and Aktualne.cz reported.

The uncovered documents confirmed that Czechoslovakia did really send the money to the Soviet Union and that the Russians acknowledged the debt. However, the loan was quietly shifted to a package of so-called Russian debt from the 1990s which politicians claimed were old receivables from pre-1989.

Back then CSOB was part of the Czech central bank and was in charge of financing foreign trade under the direct supervision of the state and loans in foreign currencies.

Klaus himself has denied these allegations. "I repeat it again that I know nothing about a contract of November 10, 1989. … It's been 32 years. It happened during [the] communist era, it was certainly a treaty that was not publicly discussed," he said, claiming the reports are a pre-arranged attack on him, possibly with the aim of blocking his return to politics.

However, based on the parliamentary archives, Klaus had difficulty defending the state budget for 1990 before MPs, according to which the money did leave for the Soviet Union. Klaus used a number of economic terms and assured the MPs that everything was fine and it was just a paper reflection in the budget of the commitments from Adamec's government.

According to HN, an agreement was proposed in April 1989 by an official of the Ministry of Finance, Zdenek Rachac, who until November 6, 1989 was on the list of the Czech Secret Police (StB) as a collaborator with the code name Riga. Rachac later took a job at the finance ministry, in which he remained after Klaus joined the office as his adviser.

"I don't know the name Zdenek Rachac, he was probably one of several hundred employees of the finance ministry, but he was by no means my advisor. I have never consulted with him, I do not know anything about him,” Klaus denied.

As HN explained, when Klaus became the PM in 1992, Rachac became a member of finance minister Ivan Kocarnik's team. Kocarnik claims that he has no idea about the loan. "I do not know about Klaus paying [this loan] after the revolution. If I remember correctly, the loan was promised by Adamec's government," Kocarnik said.

When Klaus resigned from PM post in 1998 due to unclear sponsorship of the Civic Democrat Party and the new interim government was appointed, current President Milos Zeman (back then leader of the Social Democrats) became the new head of the cabinet.

Zeman then in a hurry agreed with the Russians, who failed to pay their debt back, that they would pay only one fifth of the total debt which amounted to CZK100bn and the rest would be waived. The condition set by the Russians for repaying part of the debt to Czechia was that the transaction would take place through intermediaries.

These intermediary roles were given to the RAO UES on the Russian side and the unknown Prague company Falkon Capital on the Czech side despite the warnings of the Czech secret services about its founder, the Georgian Paat Mamaladze, whom the media at that time described as a former agent of Soviet intelligence GRU, and Vaza Kiknavelidze, whom the Czech police had investigated for co-operation with Russian organised crime.

HN reported that when Falkon Capital started dealing with the Russian debt, it had a registered capital of CZK2.5mn, while it was able to repay more than CZK20bn ($400mn) to Czechia from unknown sources. The Czech government then immediately transferred the full amount of debt to the company.

Later, however, it was found out that the Russians had actually sent CZK53bn, half of the loan, but where the remaining CZK30bn ended up was never clarified, the daily said. In 2012, Zdenek Rachac, who came up with the idea of the loan, became head of Falkon Capital.

Russian investigative newswire The Insider claimed the resulting profits from debt repayment were distributed between Zeman and the Russian side, namely Anatoly Chubais and Alexei Kudrin. Businessman Vladislav Moskalev, currently residing in Canada, which has refused to extradite him to Russia, says he was an eyewitness to the transaction.