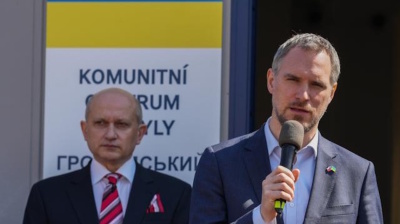 The Czech Republic is starting to show strains over how to cope with the slowing but continued influx of Ukrainian refugees into the country, with Prague council closing a key refugee centre and parliament cutting refuguee social benefits.

The moves follow populist opposition claims of Roma "benefit tourism" and disputes between the regions over how to distribute the refugees. Czechia has granted more than 350,000 emergency visas to Ukrainian refugees.

The Chamber of Deputies approved stricter rules in an amendment to the so-called Lex Ukraine, covering rules for Ukrainian refugees residing in the country. A total of 158 MPs out of 161 present at the voting were in favour of the regulation, according to which Ukrainian refugees provided with free accommodation and food will no longer receive the state support of CZK5,000 (€200). The government thus wants to prevent "benefit tourism".

“We have already passed the first, quick phase and we are trying to motivate people to enter the labour market, to actively take care of themselves," Czech Interior Minister Vit Rakusan explained the proposed change to the lex Ukraine, as quoted by the news website iDnes.

According to the amendment, the state will cover health insurance for refugees for a maximum of 150 days (except for children and the elderly). Also Czechia will no longer issue visas and residence permits to Russians and Belarusians.

But Tomio Okamura, the head of the far-right opposition SPD movement, accused the government of passing the Lex Ukraine 2 too late. "Inadaptable migrants are being deployed against the will of the population," Okamura said, using a phrase the Czech right typically uses for Roma.

Andrej Babis, former prime minister and a candidate for Czech president, has also criticised the government for not helping the regions with managing the refugee crisis. "They have not given them a single crown. Even foreign media are writing about the government's failure to handle the refugee crisis. [UK daily] The Guardian describes it as a festering crisis," he noted.

Czech Labour and Social Affairs Minister Marian Jurecka rejected accusations that the state is telling refugees that if they have not yet found work, there is no place for them in the Czech Republic. "We have to try to communicate, motivate and tell those people – if you want to have a job, housing or a place for your children in school or kindergarten, you have to move from the most burdened regions, which is Prague, Central Bohemia and partly the city of Brno and its surroundings, to other parts of the country," Jurecka said.

The Czech capital Prague has been facing an overload of refugees which, according to Prague Mayor Zdenek Hrib, is up to four times more than in some other regions. In recent weeks, the situation was further aggravated by the fact that a large number of Ukrainian refugees, mostly of Roma origin, who were staying at Prague's main railway station, submitted applications for humanitarian visas despite having Hungarian passports.

As Prague had run out of the accommodation capacity for them, tent cities for 150 people were built in the Troja and Malesice districts. The civil association RomPraha disagreed with the development of the situation in Prague and has decided to end its activities at the railway station.

"We regret that the politicians from the City of Prague are not negotiating with us and are not coming up with meaningful proposals for resolving the situation at the capital's main railway station. We reject any repression by the police and interior ministry," RomPraha said to news server Romea.cz.

The Pirate party mayor has been accusing the centre-right government of failing to create a system for redistributing refugees for several weeks and proposed differential benefits for refugees depending on whether they agreed to relocate. As the government has failed to do so, Hrib said, the Prague City Hall decided to close the Regional Assistance Centre (KACPU) for Ukrainian Refugees on June 15. KACPU, which serves Prague and Central Bohemia, has so far processed over 90,000 people.

Some have argued that the closure of Czech busiest refugee centre will only exacerbate the problem, creating chaos, since many Ukrainian refugees will still arrive primarily in Prague.

“We know that Prague is overburdened. But the Prague centre for refugees, which has been a focal point, could continue to help by registering refugees who would then be redistributed to other regions. Closing one centre to put pressure on the others is really not a solution,” said Rakusan.

The regional representatives have also responded fast and furiously. Some governors are threatening to take a similar course of action. The chair of the Association of Regions of the Czech Republic and South Bohemian Governor Martin Kuba has called Prague's decision to close KACPU an uncollegial step and a political gesture.

Hrib is meeting with the Prime Minister Petr Fiala on June 17 to address the refugee crisis. He said that once the burden of refugee overflow in the capital is lifted, Prague will reopen its centre again. "The date of the meeting was set by PM Fiala for June 17, two days after the closure of the KACPU. I assume that I will now receive a written justification as soon as possible why it is allegedly not possible to use the mechanism of benefit cuts in overcrowded regions," Hrib told the Czech News Agency.