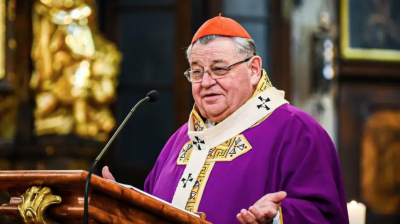 Archbishop Dominik Duka: Russian soldiers are often victims of "the strongest emotions and passions, when the terror of battle, fear and hatred really bring them to the level of a kind of amok”.
By bne IntelliNews April 29, 2022

The Czech Republic's conservative Catholic Archbishop Dominik Duka has appealed to the Czech public not to condemn Russian soldiers for atrocities they commit on Ukrainian women. The head of the Czech Catholic Church said in his blog that soldiers who rape women are not excused for their war crimes, however, they are acting under the pressure of emotions and passions in a state of frenzy.

According to him, these soldiers are often victims of "the strongest emotions and passions, when the terror of battle, fear and hatred really bring them to the level of a kind of amok”.

"No violence, especially violence as agonizing and brutal as rape, can be excused in any way. But the opposite, such acts must be unequivocally condemned. Russian soldiers have no business in Ukraine and should not be committing such atrocities there. Christians are to help and stand on the side of the victim,” iDNES.cz.

The cardinal has been regularly criticized for his opinion on the gay and lesbian communities, who Duka considers to be a threat to the Catholic Church, and for his comments that refugees should find the courage to return to their countries of origin.

The head of the Catholic Church has also for some time been criticised for his politicisation of the church, in particular his close ties to rightwing former President Vaclav Klaus and the current pro-Russian populist President Milos Zeman. In 2008 he allegedly advised Christian Democrat MP Jiri Hanus who to vote for in the presidential election.

On many issues Duka and Zeman hold the same positions, including sharing a sympathy for Russia. Duka has been reproached for serving the mass to the non-believing Zeman in November 2015 in Lany, which was perceived as a symbolic political gesture.

"His Eminence Dominic Cardinal Duka is an exceptionally respected representative of the Catholic Church in the Czech Republic and it is also largely to his credit that we are gradually removing the barriers that have existed for many years between the church and the state in our country," Zeman wrote in a letter published in 2018 defending Duka when part of the Czech faithful asked the Pope not to extend his mandate as archbishop.