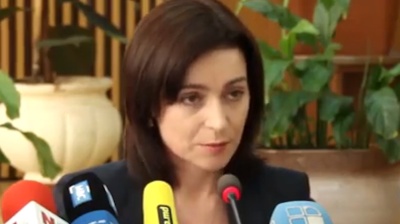 Moldova’s parliament will vote on the no-confidence motion submitted by the Socialist Party of President Igor Dodon against the government of Prime Minister Maia Sandu on November 12.

The outcome of the vote, as well as future developments, critically depend on the Democratic Party (PDM), the political vehicle of Vlad Plahotniuc, who had to leave the country after Dodon and Sandu forged a coalition to replace the Democrats in government.

The former moderate Democratic prime minister Pavel Filip, who took over the control of the Democratic Party after Plahotniuc resigned in July, has not indicated whether his party would support the motion against Sandu.

The head of the PDM caucus in parliament, Dumitru Diacov, has confirmed that no decision has been taken yet. He also said that the Democrats could support a minority cabinet if Sandu is dismissed by the no-confidence motion.

This opens the door for a return to the situation before the February 24 elections, when the Democrats and the Socialists had an informal alliance that did not exclude mutual attacks but allowed them to keep the pro-EU parties PAS and PPDA (currently the ACUM bloc) out of office.

The PSRM and ACUM bloc, co-led by Sandu, formed a coalition and appointed Sandu to head the government in June, ousting the Democrats and announcing a policy of “de-oligarchisation” after Plahotnuic managed to capture state institutions over the previous few years. However, the tensions between the PSRM, headed by pro-Russian President Igor Dodon, and ACUM now seem to have scuppered the fragile coalition between the two.

The current rift opened up over Sandu’s plans to change the rules for appointing a new head prosecutor. Currently, the selection committee for the head prosecutor position brings together representatives of the government, parliament, presidency and independent experts, and the procedure is supervised by the Ministry of Justice. However, the bill proposed by Sandu would give the prime minister the power to make discretionary nominations to the Prosecutors’ Council that makes the final decision on the head prosecutor.

Sandu explained she wants to change the procedure after one of the members of the committee that organised the preliminary selection demonstrated political bias. Specifically, the committee member proposed by parliament speaker Zinaida Greceanii — who also serves as head of the Socialist Party since Dodon took office as president — voted against Sandu’s protegee Stefan Gligor, who is a lawyer and civic activist.

Sandu’s questionable proposal about the head prosecutor selection has further strengthened the position of the president — who can pretend he is acting in favour of independent justice.

Her initiative has drawn strong criticism from the Socialists. PSRM deputy Vasile Bolea said that "instead of changing the wrong direction in which the country is heading, the current government has become a cabinet that, through its inaction on different directions of social-economic activity, harms the interests of the present generation and future generations of citizens.”

The crisis comes a few days after ACUM’s Andrei Nastase lost the elections for Chisinau city hall, which was taken by the Socialist candidate. This shifted the balance within the coalition and gave the Socialists more bargaining power.