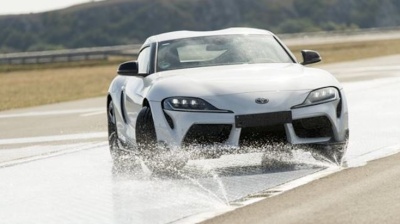 Continental's 27-hectare test track is made up of five modules.
By bne IntelliNews September 25, 2020

The test track project is all the more important because a "sharp competition with much at stake" has started globally for the redistribution of capacities in the aftermath of the pandemic, said Foreign Minister Peter Szijjarto at the official opening ceremony.

The car industry had always been a flagship of the Hungarian economy. It accounts for 30% of the country’s industrial output with HUF9.5 trillion in value, up 12% in 2019. Some 90% of the sector's output is exported, he added.

The 27-hectare test track is made up of five modules. A 210-metre wide dynamic surface has been established on the track; a 150-metre sprinkled ceramic surface that is more slippery than ice. The track also has an almost 500-metre long acceleration lane with an inclination of 10% six hills with various gradients, and an 825-metre tarmac track where a maximum speed of 150 km/hour can be reached.

Continental has been present in Hungary for 30 years, and employs some 8000 people at ten locations, in seven factories and three offices. It invested more than €500mn since 2010.

Half of the 2,050 workers at the Veszprem plant of Continental are employed in development and engineering jobs, who can test the products made there in a real environment, CEO Tamas Papa said.

The Prime Minister's Office dismissed a report by Reuters that the European Commission had asked the Hungarian government to amend public procurement rules. Reuters said the bloc wants outright ... more

The European Central Bank (ECB) said on February 4 it has decided to extend its temporary swap and repo lines with non-euro area central banks by nine months, aiming to help them meet their ... more