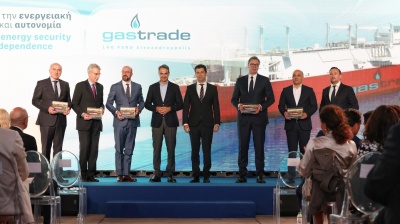 The construction of a liquefied natural gas (LNG) terminal in the Greek city of Alexandroupolis was launched on May 3, a major project that will help Bulgaria, North Macedonia and Serbia diversify from Russian gas.

This will be the second Greek LNG terminal, whose construction takes place at a time when investments aimed at achieving independence from Russian gas are accelerating throughout Europe. Greece is thus set to become a major gas supplier for the Balkans region.

The official launch of construction works in the eastern Thrace region was marked by Greek Prime Minister Kyriakos Mitsotakis and his Bulgarian peer Kiril Petkov. The ceremony was attended by the President of the European Council Charles Michel, the President of Serbia Aleksandar Vucic as well as North Macedonia’s PM Dimitar Kovacevski.

The project worth €363.7mn in total will comprise the floating storage and regasification unit (FSRU) as well as a system of underwater and land pipelines for the gas to be transmitted to the national grid, Greece’s Kathimerini reported.

During the event Mitsotakis stressed the contribution of the new terminal to the region’s independence from Russian natural gas.

"The project in Alexandroupolis is a new energy gateway and with its completion we will soon be able to get rid of the gas coming from Russian sources and our countries will have a role in the new energy map," Mitsotakis said, according to a government statement.

"Moscow's recent blackmail with gas makes not only co-operation necessary but urgent," he added.

For his part, Petkov said that this is a historic day for Bulgaria and Greece, during which an important step is taken for the energy independence of the two countries.

Russia’s Gazprom decided to stop delivering natural gas to Bulgaria as of April 27 after Sofia refused to amend the existing contract. Bulgaria is highly dependent on Russia as the source of almost all its gas imports. North Macedonia is receiving gas via Bulgaria.

Since last week when Moscow closed the tap for Bulgaria, Greece became the sole supplier of gas to this country. 40% of Bulgaria's gas needs are met by LNG from Greek terminal Revithoussa and 60% by Russian gas sold by Greek public gas company DEPA, according to the article.

The Alexandroupolis project has been declared a project of special interest for natural gas by the European Union.

"We will end our dependence on Russian fossil fuels. This new LNG terminal is a geopolitical investment. It will help free Southeast Europe from the weaponisation of gas supply by Russia," Michel said in a tweet.

“This is a historic event for the countries in the region in the field of energy. This is a project for long-term energy independence and for a stable and continuous supply of LNG in an extremely critical time,” North Macedonia’s Kovacevski said, according to the government's statement.

North Macedonia participates in this project with an agreement to reserve a certain capacity for liquefied gas from the new Greek terminal.

“Alexandroupolis terminal opens the possibility for the supply of gas from several different sources, such as from the United States and the Middle East countries” Kovacevski said.

Vucic, meanwhile, underlined that "at first I was quite skeptical, I was wondering if such a thing could happen, but now I want to say that I am grateful, because with this project we will be able to secure significant quantities of gas.”

Unlike the other countries set to benefit from the project, Serbia has not imposed sanctions on Russia over its invasion of Ukraine, and Serbia is expected to sign a new long-term gas supply contract with Russia in the near future.

The natural gas that will arrive in the Alexandroupolis terminal by ships from various sources will be re-gasified, and will enter the national system and from there be sent through the interconnectors to Bulgaria, North Macedonia, Serbia and Romania, according to Kathimerini.

The project is being implemented by the Greek company Gastrade, which envisages the project completion in 2023.

However the company, at the request of the Greek government, is making efforts to accelerate the process of completion by at least six months.