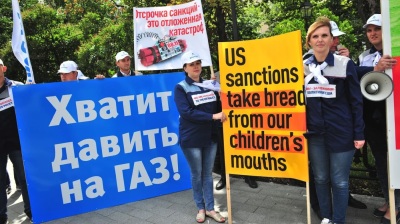 The problem with sanctions on Russia is there are too many of them and they don't work very well
By Lindsay Mackenzie in Glasgow November 4, 2020

On October 23 the United States imposed sanctions on a Russian government research institute for its links to malware used to target critical infrastructure.

“The Russian Government continues to engage in dangerous cyber-activities aimed at the United States and our allies”, Treasury Secretary Steven Mnuchin said in a statement.

The announcement came only days after the State Department revealed plans to extend sanctions against the Russia-led Nord Stream 2 gas pipeline. The US has said it is prepared to use a range of sanctions to halt the project which has around 150km left to go in Danish and German waters.

Calls for broader sanctions on Nord Stream 2 have grown louder since Russian opposition figure and anti-corruption campaigner Alexei Navalny was poisoned in August with a nerve agent from the Novichok family. In September German Chancellor Angela Merkel signalled the project was a potential target for retaliation. So far, the European Union has sanctioned six Russian government officials with asset freezes and travel bans instead. Announced on October 15, the EU said the attack on Navalny would only have been possible with the consent and involvement of the Russian Presidential Executive Office and Federal Security Service.

This flurry of sanctions is not surprising. They have become one of the most commonly used instruments in the foreign policy and diplomatic toolkit and an inevitable part of responding to a host of international crises. They’ve also become the cornerstone of the West’s Russia strategy, and have been used to counter Kremlin belligerence since Moscow’s 2014 annexation of Crimea and invasion of eastern Ukraine. The problem however, is that they don’t work very well.

The theory behind sanctions is relatively simple; apply enough economic pressure and the target will change its political behaviour. It’s essentially about carrots and sticks, using a combination of coercion, deterrence, selective punishment and condemnation. They can be introduced by governments or through institutions, and can target countries as well as complicit companies and individuals. Before 1990 they were rarely used. Now the EU alone has over forty different sanction regimes in place.

But their effectiveness is questionable. History is littered with examples of sanctions bolstering the targeted government, or even inadvertently harming a population while those in power evade the consequences. These risks have abated as sanctions have become smarter and more targeted, but their record of making a difference where it matters most remains unremarkable. Even where they appear to have been successful, it’s not always easy to disentangle the sanctions from other pressures.

As for Western sanctions on Russia, they have expanded in scope over the years to respond to not just events in Ukraine but a host of ‘malign activity’; from cyber attacks and democratic subversion to money laundering. Sanctions target individuals, companies and whole sections of the Russian economy. There is no doubt they have had an economic impact. The business environment has deteriorated and become more unpredictable. Targeted individuals shut out from the West have faced financial frustration. Russia’s energy, defence and finance sectors, which had relied heavily on Western capital and technology before being cut off, have been hit particularly hard. The long term consequences for something like advanced oil exploration could be significant.

Yet the political impact has been minimal. The initial introduction of sanctions back in 2014 did little to loosen Moscow’s grip on Crimea or hamper its desire to stir conflict in eastern Ukraine. Six years on and the war continues to simmer just enough to avoid becoming frozen. Some analysts credit sanctions with deterring further military escalation into Ukraine, but this ignores that Moscow’s priority has been political leverage not physical land. Despite various attempts to re-charge the peace process the Kremlin has remained stubbornly unwilling to compromise.

In the meantime Moscow has felt comfortable enough to play spoiler, flexing its military power and continuing a political war against the West. Its actions, like the use of a military grade nerve agent in Salisbury UK, have often offered little in the way of plausible deniability. That Moscow seems to have been behind targeting Navalny with a similar toxin in Tomsk is especially brazen.

There are several lessons here. The first is that sanctions don’t happen in a vacuum and targeted countries can adapt their behaviour to mitigate them. For Russia, this has meant diversifying its economy away from Western markets towards Asia, rolling out a programme of import substitutions to drive self sufficiency, and triggering huge amounts of state intervention to support areas like banking. Add to that a well-managed central bank, currency devaluation, and attempts to financially shelter members of the Russian elite. The results have been mixed.

Another, perhaps more fundamental, lesson is that some countries, particularly more autocratic ones, are simply willing to endure the fallout and stigma of sanctions. They see little benefit in restraining their behaviour and essentially factor their cost into decision-making. So while there may be economic consequences, political ones don’t necessarily follow – especially in the short- to medium-term.

Why then, are sanctions so popular? While they can certainly help pile on a degree of economic pressure, much of it comes from their ability to communicate a sense of united action and solidarity. There is real value here. Sanctions can reaffirm norms and standards. They can create a platform to stigmatise and rally international pressure. There’s an element of performance too, especially for those who wish to be seen doing ‘something’. Of course, doing ‘something’ is sometimes all there is. When those wishing to take a stand against an aggressor feel they have few realistic options sanctions can be a powerful signal of moral outrage. For the West, they have provided a surprisingly consistent and public rallying point against Moscow despite other bubbling disagreements.

But sanctions are not a throwaway policy shortcut. They are a reactive tactic rather than strategic, and inflating their utility breeds unrealistic expectations of what they can achieve. The problem is not so much sanctions themselves. For the West, they can, and should be, part of a creative, wide-ranging approach towards Moscow. The problem is that they now dominate the West’s response.

Indeed, sanctions have become so sweeping and predictable that they risk undermining messaging in three ways. First is that by using them to deal with a shopping list of very different behaviours they muddy Western policy goals and reduce sanctions to a blunt, catch-all punishment rather than anything selectively coercive.

Second is that instead of providing a platform for unity, they also amplify alliance tensions and cause distraction – Berlin’s public dismay at Washington's continued targeting of Nord Stream 2 being an example.

And third, despite claims that sanction are a long term policy tool, the more they are used in the short-term without tangible political impact the more they weaken Western attempts to display authority and credibility. One individual targeted in the recent Navalny sanctioning, FSB director Alexander Bortnikov, has already been under EU sanctions for six years.

Sanctions have a role in responding to Russia but they cannot replace the hard work of diplomacy or strategy. The West will eventually run out of things, and people, to target. What will it do then?