COMMENT: Sberbank’s chief economist says Russian inflation could come in below 4% in 2019 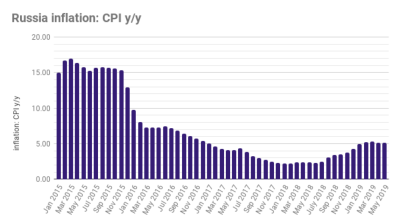 The chief economist of Russian state-owned retail bank Sberbank Anton Stroutchenevski says that inflation could end this year at below 4%. If it does that would be well below the consensus.

Inflation fell to a historic low of 2.3% last year, but by the end of the year it had ticked up to around 5% and was spurred on by a 2pp hike to VAT rates in January. However, economists were surprised how fast those inflationary pressures receded and now they are surprised that inflation has continued to fall faster than expected.

The inflation question is important as lower than expected inflation will allow the Central Bank of Russia (CBR) to cut rates more aggressively. After the first quarter Russian growth came in at 0.5% -- well belwo consensus – cuts are needed and some analysts speculate that the CBR resume cutting rates at the upcoming meeting in July.

Below we reproduce a note to clients by Stroutchenevski explaining why he things inflation could come in under 4%, the official CBR target rate, by the end of  this year. (ED).w

Inflation in Russia continues to surprise economists. In June, monthly inflation came in at only 0.0% m/m, down from 0.5% a year earlier, bringing the y/y gauge to 4.7%. Deflation in the fruits and vegetables category was a major factor behind the flat June reading, though inflation adjusted for seasonal effects was also very low. Core inflation (which strips out fruits and vegetables, regulated tariffs and fuel) came in at just 0.2% m/m in June. The average monthly core inflation reading for April-June was only slightly higher at around 0.3%, putting the annualized figure at around 3.2%; this annualized inflation gauge has been below 4% (the CBR's target) since April.

Month-over-month inflation came in well below our expectations again in June, in large part because the decline in fruit and vegetable prices was sharper than we had expected, so much so that we have decided to downgrade our inflation forecast for the full year. Consumer demand remains weak, and we expect $/RUB to average around 63 in 2H19. All this means that annualized monetary inflation, which usually corresponds with core inflation, might remain in the 3-4% range.

The agricultural sector will play an important role in determining where annual inflation ends the year. Year-to-date inflation stood at just 2.5% at end-1H19, so deflation in the CPI gauge in August could easily move the headline figure below 4%. This could happen, for instance, if agricultural output at the end of the summer were to be significantly higher than it was last year, a scenario that looks quite likely given the low base from last August (output was down 10.6% y/y).

We now forecast year-end inflation at 3.8-4.2%, versus 4.5% previously. After we get the August and September results, we should be able to narrow this range. All in all, we see an increasing likelihood that y/y inflation will end the year either close to the lower band of the CBR's current forecast (4.2-4.7%) or even below this.