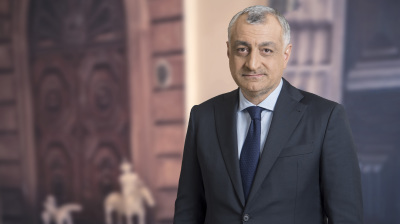 Georgia’s FTSE 250-listed TBC Bank Group said on July 25 that its chairman Mamuka Khazaradze and deputy Badri Japaridze had resigned from its board with immediate effect, a day after prosecutors charged them with money laundering related to transactions that took place more than a decade ago.

“They have both arrived at this decision after careful consideration in order to ensure that the allegations made against them do not affect the Group and to be able to concentrate on refuting those allegations,” TBC Bank said in a statement.

Khazaradze and Japaridze co-founded the bank in the early 1990s. Prosecutors announced on July 24 that they have been charged with laundering illegal revenues worth over $16.75mn.

TBC Bank, Georgia’s biggest retail bank, said the duo planned to re-join the board once the claims against them were cleared. The board, it said, had “full confidence” in their integrity

TBC shares sank nearly 12% on July 24 after the charges were announced, making it the worst day on record for the stock. They lost another 4.11% on July 25.

“Absurd” charges
Khazaradze has described the charges against him and his fellow banker “absurd”. Reuters reported in February how they had been forced to leave the company’s corporate unit, TBC Bank JSC, following pressure from the Georgian government.

TBC Bank JSC was investigated by Georgia’s central bank, the National Bank of Georgia, and the country’s office of public prosecution over transactions in 2007 and 2008. The unit in February said it would pay about Georgian lari 1mn ($345,400) to NBG in relation to the probe.

TBC Bank Group issued a release explaining that the two, as non-executives, were not involved in its day-to-day management. There has been no suggestion of any charges being brought against TBC Bank Group, TBC Bank or any other member of the group, the press release added.

Khazaradze has alleged that the charge “aims to stop the construction of Anaklia Deep Sea Port”, a $2.5bn project that is Georgia’s flagship infrastructure investment, Agenda.ge reported. It is being developed by TBC Bank in partnership with US partners.

Khazaradze talks of “civic movement”
Apart from developments related to Anaklia port—which lately moved in the right direction when the government extended the deadline for concluding financing for the first phase of the project by six months—Khazaradze has become directly involved in politics. He announced this month that in September a “civic movement” is to be created that would express support for the anti-government protesters who have occupied Rustaveli square in Tbilisi since June 20. There has been speculation that attacks on the government made by Khazaradze since last year were prompted by his plans to get into politics.

“The government continues its actions against me and Japaridze which they started in January 2019. The moves by the government have affected us, as well as shareholders of TBC Bank, the implementation of the Anaklia Port project and the state,” Khazaradze said after he was officially charged with money laundering.

The two bankers said the charges would damage prospects for attracting investment into the country.

ADC is facing difficulties in raising $600mn from international financial institutions for first-phase financing. It has accused the government of actions that have hindered the process. Bidzina Ivanishvili, the billionaire head of ruling party Georgian Dream and an ex-PM of Georgia, is often accused of wanting to take over the project.

“Ivanishvili does not want to see foreign investors. He does not want competition. It's very dangerous for the country. Only Bidzina Ivanishvili's friends come here,” Fadi Asli, chairman of the International Chamber of Commerce (ICC) in Georgia told journalists.

EBRD issues statement
Following the resignations, the European Bank of Reconstruction and Development, a minority shareholder in TBC Bank Group, put out a statement, reading; “EBRD notes the recent board changes at TBC Bank Group PLC. The bank is a solid financial institution led by a strong management and an independent board of directors. We welcome the decision by the chairman and the deputy chairman of the bank to step down from the board at this time to focus on allegations made against them in a legal dispute.

“We also welcome the strengthening of the board with the addition of independent directors with extensive executive level experience in financial institutions. We expect a fair and transparent due process and a prompt resolution of the case with no adverse impact on the operations of the bank. Meanwhile, the EBRD as a longstanding partner, shareholder and lender of TBC Bank will continue to work with and support TBC Bank Group PLC.”