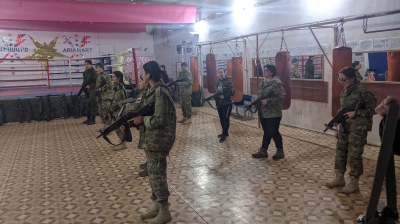 Armenian volunteers training. This week's fighting has raised fears that the region could once again descend into bloody conflict. / bne IntelliNews
By Ani Mejlumyan in Yerevan September 15, 2022

This week’s attack by Azerbaijan on Armenia is a crude reminder that Baku is getting increasingly impatient about the failure to reach a full peace deal since its victory in the 2020 war over the disputed territory of Nagorno-Karabakh, and that Baku wants to use the new balance of power in the region to dictate the terms of such a deal.

This has raised fears that the region could once again descend into bloody conflict. Armenia has so far reported 150 military and eight civilian deaths and more than 2,500 civilians displaced. Azerbaijan reported 50 military deaths by September 14, making it one of the worst escalations in the fighting since the 1990s. In the 2020 war, 6,500 were killed and Azerbaijan reconquered large areas of land in and around Nagorno-Karabakh.

Azerbaijan has regularly accused Armenia of dragging its feet in implementing the 2020 ceasefire agreement, including moving towards a peace agreement for the territory, which is surrounded by Azerbaijan and internationally recognised as part of that country but is inhabited mainly by ethnic Armenians.

Azerbaijan has also refused to negotiate with Armenia through the Minsk Group of the Organisation for Security and Cooperation in Europe, which led negotiations between the two sides since the first war in the 1990s, in which Azerbaijan lost all of Nagorno-Karabakh and several other regions on its borders with Armenia. On multiple occasions, Aliyev has written off the efforts of the group, which includes Russia, France and the US, as useless, because he sees it as fatally divided and unable to promote his goals.

Instead Baku has accepted negotiations mediated by Moscow or the EU. This has been backed up by intermittent military pressure to concentrate minds in Yerevan, using the imbalance in troops and materiel created by Baku’s big rearmament programme, financed by its energy wealth.

Russia is the guarantor of the ceasefire agreement that ended the 2020 war between the two sides and has some 2,000 peacekeepers stationed in Nagorno-Karabakh. Russia also has a military base in Gyumri, on the Armenian-Turkish border, with several thousand soldiers. Armenia has a military treaty of security guarantee with Russia separately and is part of the military block CSTO.

But now, since Russia's invasion of Ukraine has diverted its attention and led many to doubt its military capabilities, Azerbaijan appears to be testing Moscow’s willingness to keep the peace in the South Caucasus.

In addition, the war may have made Baku feel that it has become indispensible to the EU after Brussels signed a deal with Azerbaijan in July to double the gas imports it buys in order to cut its dependence on Russian supplies. European Commission President Ursula von der Leyen visited Baku last month in a trip notable for the lack of criticism of Aliyev’s repressive regime.

Azerbaijan is now pushing for a peace deal that is more like an ultimatum to Armenia. While the wording on paper is vague, the rhetoric in Baku is loud and clear; it wants a sovereign corridor through Armenia’s Syunik region connecting Azerbaijan to its Nakhchivan enclave, which is mainly inhabited by ethnic Azerbaijainis, and the recognition of Nagorno-Karabakh as part of Azerbaijan.

Accepting both demands would not only be political suicide for Armenian Prime Minister Nikol Pashinyan but would also impose long-term security risks, including the possibility of ethnic cleansing of the Armenian population in Nagorno-Karabakh.

Nevertheless, Pashinyan announced on September 14 in parliament that he is willing to sign a deal,  hinting that he would make concessions that could threaten his survival. The news sparked demonstrations across Armenia.

“We want to sign a paper, as a result of which we will be criticised, scolded, called traitors, even the people may decide to remove us from power. But we will be grateful if as a result of this Armenia receives lasting peace and security on an area of ​​29,800 square kilometers. I made a clear decision, I don’t care what happens to me. I care what happens to Armenia,” said Pashinyan.

Later, he appeared to reverse his position, writing on his Facebook page,  "no document has been signed and is not going to be signed. This is an information sabotage directed by unfriendly external forces to break the country's resistance."

The pattern of negotiations and fighting this year illustrates the tactics Baku has used.

Azerbaijan revealed its five-point plan in March, and Armenian officials said they accepted the principles. The terms are mutual recognition of each other's territorial integrity, which would amount to Armenia acknowledging Azerbaijan's sovereignty over Karabakh. However, Armenia proposed having a different resolution to the Nagorno-Karabakh conflict.

Even before the five-point principles of the peace deal had been revealed, Azerbaijan escalated fighting in Nagorno-Karabakh as all attention was on Ukraine, including and foremost, Russia's. Later in mid-March, Azerbaijan closed the gas pipelines to Nagorno-Karabakh, causing a crisis in the cold weather.

Following the restoration of the gas supply, the sides met in Brussels on April 6. European Council President Charles Michel, who is meditating the talks, said they had "agreed to instruct ministers of foreign affairs to work on the preparation of a future peace treaty, which would address all necessary issues".

After the second meeting in Brussels on May 22 between Aliyev and Pashinyan, there seemed to be a breakthrough; the border delimitation and demarcation commissions met on the border.

Azerbaijan insisted on Armenian military forces' complete withdrawal from Karabakh. Although Armenia announced in July that they would not be sending new conscripts to Karabakh on August 3, Azerbaijan attacked Karabakh's Armenian-controlled territories and managed to capture some additional mountain heights.

Azerbaijan also demanded that Armenia use an alternative road to Karabakh and give up the Lachin corridor. The August fighting was concentrated in that exact area.

By the end of August, Azerbaijani forces had taken control of the Lachin corridor, the only overland link between Armenia and Nagorno-Karabakh.

On August 31, Pashinyan and Aliyev held another negotiation in Brussels. Michel reported that the sides agreed on instructing the foreign ministers to meet within one month to work on draft texts. This month, both countries' leaders said a deal could come within a matter of months.

The next meeting was scheduled in November for the two countries' leaders. However, on September 7, during a Eurasian Economic Union summit in Russia, Pashinyan revealed that they "did not manage to register common positions on the most important issues."

On September 13, Azerbaijan attacked again, but this time on Armenia's internationally recognised borders. Days prior to the escalation, Azerbaijan had repeatedly reported Armenian ceasefire violations, which Baku denied.

Azerbaijan's statement speculated that Armenia was using "provocations" to slow down the finalisation of infrastructure projects carried out by Azerbaijan in the border areas and "maintain a tense atmosphere" near Azerbaijan's borders.

Russia's foreign ministry said the fighting had stopped under a Russia-brokered ceasefire reached at 10am Caucasus time on September 13. Still, shellings have been reported by the community leaders and residents of the Armenian villages on September 14. Even though Armenia appealed to the Russian-led CSTO for aid, its military allies have just agreed to send a fact-finding mission to the area, which will arrive next week.

Azerbaijan justified the war in 2020 in Nagorno-Karabakh by the lack of results through negotiations. Since then, the pattern of the Azerbaijani government's behaviour shows that they have understood that whatever couldn't be achieved on the negotiations table could be achieved through military force.

Nagorno-Karabakh, however, is a disputed territory, unlike Armenia. Until now, Azerbaijan refrained from any major attacks, excluding some incursions by small troops, into Armenian territory. Any further escalation could lead to a war where Russia needs to show up. In failing to do so, its relevance in South Caucasus would either be extremely weakened or vanish all together.

CAUCASUS BLOG: Armenia’s day of crisis delivers anticlimax
CAUCASUS BLOG: Georgia’s corrupted anti-corruption strategy
CAUCASUS BLOG : What can Biden offer the Caucasus and Stans, all but forgotten about by Trump?