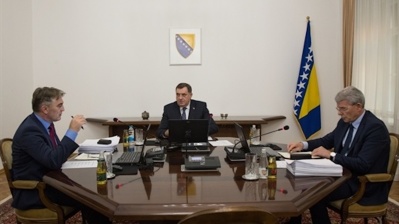 The newly-sworn members of Bosnia & Herzegovina’s tripartite presidency set the country’s membership in the European Union as the country's strategic foreign policy priority in their first joint declaration.

The country’s EU membership process has been stalled by continuous political disagreements, particularly triggered by Milorad Dodik, the leader of the Serb Alliance of Independent Social Democrats (SNSD) and a member of the presidency.

Dodik, who blocked the previous attempt to hold the first session of the new presidency over a dispute about the flags displayed in the room, also signed the declaration.

“We, the undersigned members of the presidency of Bosnia & Herzegovina, express our commitment to the implementation of the Stabilisation and Association Agreement,” the declaration reads.

It adds that the presidency is willing to push for economic and social reforms, strengthening of the rule of law, the fight against corruption, public sector reforms and development of Bosnia’s administrative capacity.

The three presidents also pledged to send answers to the EU’s additional questions by the end of December, hoping to get a candidate status in 2019.

The country submitted the answers to the EU questionnaire in February following months of delays due to political disagreements. It then had to answer additional questions, but the same issues have stalled the process.

In September, MEP Christian Dan Preda said that the country must implement serious reforms and show concrete results in order to get European Union candidate status, but the country has slowed the pace of reform due to disagreements between politicians ahead of the October 7 elections.

Stasa Kosarac, Bosnia & Herzegovina’s Minister of Foreign Trade and Economic Relations, was urged to resign after local media published photos of him at a party at local restaurant with ... more