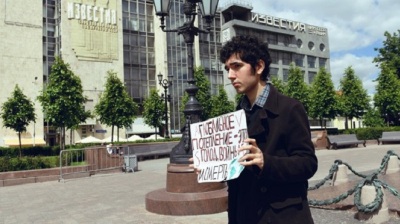 The 28-year-old, who was born in Armenia and moved to Russia with his parents to escape the First Nagorno-Karabakh War when he was one year old, organised weekly Friday environmental protests in Moscow’s Pushkin Square on the model of Thunberg’s School Strike movement, exiled news website Meduza reported.

In 2019, he helped to found the Russian chapter of Thunberg’s Fridays for Future, an international movement in support of government action against climate change. He fled Russia in March and now lives in France, although his legal status is currently uncertain.

“We started referring to climate change as a climate crisis,” Makichyan told Meduza. “We started connecting the dots between climate change, forest fires and the increase in natural disasters.” Like in many countries, the protests consisted primarily of young people. “Many activists have gotten kicked out of their universities. And if people are willing to risk their freedom for the sake of an issue like that, you know it’s an important issue,” he said.

Makichyan and Thunberg have even collaborated a few times, sharing a stage at the UN climate conferences COP25 and COP26.

Makichyan has also stressed that European imports of Russian fossil fuels are funding the war in Ukraine.

Europe spent €57bn on Russian oil, gas and coal in the first 100 days of the war, 61% nof Russia’s total exports of €93bn, according to research from the Centre for Research on Energy and Clean Air (CREA).

In May, Makichyan learned that the government wished to revoke his citizenship because some “false statements” were allegedly made to the government about him, dating back to 2004. There is no reference to his current environmental activism, he said.

Makichyan married human rights activist Polina Oleinikova on February 24, the day that Russia invaded Ukraine. Makichyan wore a shirt with the words “Fuck the War” written on it on his wedding day.

The couple had attended the limited anti-war rallies held in Russia in February and March before fleeing the country.

Russia’s record on climate change is dubious. At the current UN climate talks in Bonn, Russia spoke out to accuse the West of mixing up politics with the environment.

Meanwhile, the Kremlin has earmarked funds to invest in reducing carbon emissions. The Kremlin said in December that it would launch a four-decade-long, $6.5 trillion investment campaign to reduce carbon emissions by 60% before 2050 from 2019 levels, of which $1.2 trillion will come from public funds.

The country aims to reach net zero by 2060, while it will publish a comprehensive roadmap by March 1, 2022.  Then on July 1 next year Russia will formally launch a massive climate initiative with the goal of achieving carbon neutrality by 2060. A new programme of energy efficiency will also be finalised by October 1, 2022.

However, the permafrost is melting and poses over a trillion dollars worth of damage to the Russian economy, and the rate of temperature rise in Russia is now triple that of the global average. This summer was plagued by wildfires over territories the size of European countries.

Russia’s emissions are actually lower than in 1990, the UNPCC benchmark, because of the collapse of heavy industry since the end of the USSR, and the high emissions the USSR made in the 1980s.

One major question is whether Russian companies will commit to investing to reduce emissions in a bid to improve their environment, social and governance (ESG) scores, which are crucial to access global capital.

With the invasion of Ukraine, Russian corporates have lost access to Western capital, meaning that ESG and green issues will sink down the investment agenda of the country’s largest companies.

However, the treatment of Makichyan, who is a Russian citizen but whose Armenian background makes him vulnerable, shows how the Kremlin will not tolerate any public protest.

Makichyan himself said that his treatment could be part of an intensifying of the government's scapegoating of non-ethnic Russians as the war in Ukraine progresses.

The Vjosa is one of the last wild rivers in Europe and environmental groups have been campaigning to have it made a national park to prevent it being exploited for hydropower.