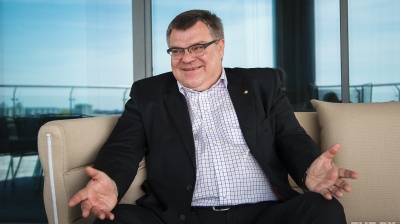 The political crisis in Belarus has been running for over 300 days but surprisingly Belarusians' attitude to Russia remains positive and Lukashenko retains a not insignificant degree of support.
By Ben Aris in Berlin June 23, 2021

Belarus’ prosecution service has asked for the maximum 15-year sentence for the jailed presidential candidate Viktor Babariko, who has been on remand for a year on embezzlement charges. A survey released this week showed that Babariko is by far the most popular politician in the country, and would have been swept into office if he had been allowed to run in the August 9 presidential elections last year.

He was arrested and charged with embezzlement after he collected a record 400,000-plus signatures as part of the application process to run in the presidential race – four times more than necessary. Thousands of people came out to protest against Babariko’s arrest on the same day in June, forming the first of the “human chains” of protesters strung out along the roadsides that were the hallmark of the pre-election protests.

In July Babariko and his son were charged with money laundering and he was then barred from standing in the elections after the Central Election Commission (CEC) invalidated the majority of the signatures on the petition Babariko submitted to compete in the elections. Several other leading opposition candidate’s applications were also invalidated on the same grounds, although that of Svetlana Tikhanovskaya was accepted.

Tikhanovskaya’s husband Sergei Tikhanovsky was also arrested shortly after Babariko and both men remain in jail. As neither man had been convicted of a crime at the time, under Belarusian law they were still eligible to stand in the election, albeit from jail.

Babariko remains by far the most popular politician in the country, according to a survey carried out by Chatham House with the Royal Institution of International Affairs, and would almost certainly have been swept into office if he had been allowed to run.

Moreover, Babariko could also be an acceptable candidate for the Kremlin, as he spent 20 years running the local subsidiary of Gazprombank, which belongs to the eponymous gas company.

Independently wealthy, Babariko’s money has been used against him after the State Prosecutor Sergei Girgel accused the banker of money laundering and asked the Supreme Court of Belarus to convict him and apply the maximum prison sentence of 15 years in jail.

"Babariko will finally be sentenced to 15 years of imprisonment in a medium security penal colony with deprivation of the right to hold leading positions," Girgel said.

The charges are widely seen as trumped up and politically motivated. According to the Chatham House survey, Babariko remains the third best-known name in Belarus after Lukashenko and Tikhanovskaya, with 87% of respondents recognising his name. But he leads the poll, with 34% of those that think he would make a good president given three choices and 25% given one choice.

Surprisingly Lukashenko comes in second place with 25% and 23% respectively as the Belarusian strongman has managed to retain many of his core blue collar supporters who are grateful for the stability he delivered during the chaos of the 90s – an appeal he shares with Russian President Vladimir Putin.

While Tikhanovskaya has become the international face of the opposition to Lukashenko at home, while she is widely admired, she is taken a lot less seriously as a politician, something she herself does not claim to be; 10% (4%) of respondents thought she would make a good president.

Her colleague from the Coordinating Council and former minister of culture Pavel Latushka outpolls Tikhanovskaya on both counts, scoring 14% for those with three choices and 8% with one choice. Like Tikhanovskaya and most of the other members of the Coordinating Council, Latushka fled into exile after the mass demonstrations broke out, but he had already distinguished himself at the first meetings of the council by showing himself to be a polished and distinguished politician. 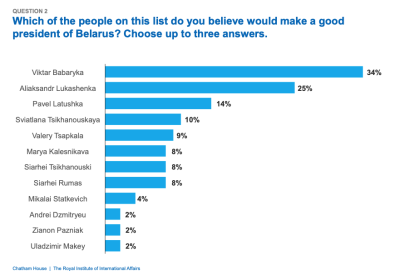 Less surprisingly Lukashenko leads the ranking of “politicians you would never vote for as president”, but even here Lukashenko only scores 51%, whereas Tikhanovskaya comes second with 39%. Tikhanovskaya has always said that she was competing in the presidential race purely to oust Lukashenko and the first thing she would do if she won (as she almost certainly did) would be to release the political prisoners – including Babariko and her husband – and then quit, triggering fresh free and fair elections.

Babariko comes in third on the list of those that voters would never cast ballots for, with 21%, the lowest score of any of the main opposition figures. 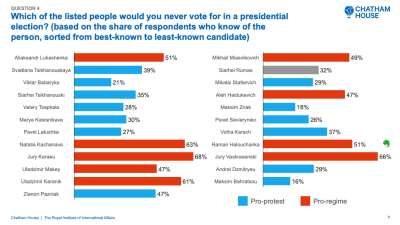 While all the regime-backed political figures are universally distrusted by the population, with the exception of former prime minister Siarhei Rumas, who is a possible compromise candidate, Babariko scores less well on this metric.

“As with the ratings, protest leaders are notably more trusted than officials. The exception is former prime minister Siarhei Rumas, who lives outside Belarus and whom many do not consider a part of the Lukashenka regime,” Chatham House said in its report.

From the opposition block the most trusted (41%) is Maksim Znak, a lawyer and member of the Coordinating Council, who did not flee into exile and was arrested as a result. Babariko scores a modest 18% behind Latushka (20%) and also Maria Kolesnikova (23%), who is his former campaign manager, who ran for the presidency together with Tikhanovskaya and was very prominent in the subsequent demonstrations until she was also arrested and jailed. 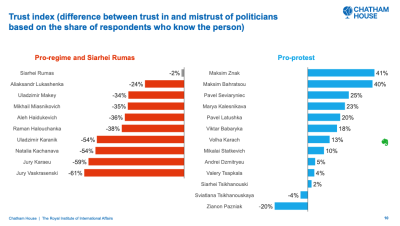 None of the regime organisations garner much trust amongst the voters, with the army doing best and the Central Election Commission (CEC) doing worst.

Independent media does best (40%) amongst the pro-opposition organisations together with the Orthodox Church (39%), whereas the Coordinating Council and Tikhanovskaya’s team are in the middle of the field (both 30%).

“After Lukashenka, the most well-known political figures in Belarus are pro-protest: Tsikhanouskaya, Babaryka, Tsikhanouski, Kalesnikava, Tsapkala and Latushka,” Chatham House concluded in its survey. “In general, people are far more familiar with the protest leaders than they are with state officials. Lukashenka’s supporters know their functionaries less well than their opponents do, which explains the extremely low ratings and trust levels of officials.”

The survey explored Belarusians' attitudes to international affairs as well and remarkably Russia remains the most liked of Belarus’ international partners, despite the Kremlin’s obvious support of the Lukashenko regime.

Putin has played a crucial role in Belarus’ would-be revolution. After the first month of mass demonstrations Lukashenko came very close to falling, when he was openly and defiantly heckled at a speech to the workers of the MZKT military truck factory from which he fled visibly unsettled. Observers called it Lukashenko’s “Ceausescu moment” but within days Putin promised to send in Russian military support “if necessary” and the president quickly retook the initiative. While the desire of the Ukrainians to turn to the west and move closer to the EU fuelled the protests on Maidan in Kyiv in 2014, the Belarusian opposition leadership has been explicit from the start that it wants to remain close to Russia and has no aspirations to join the EU. Moreover, Tikhanovskaya has repeatedly that this is a “fight between the people and Lukashenko” and “it is not about geopolitics.”

Russia remains perceived as Belarus’ best friend by the population, with almost 80% feeling “very positive” or “somewhat positive” about Russia. The EU scores a total 70%, the same as Ukraine, and the US 53%. 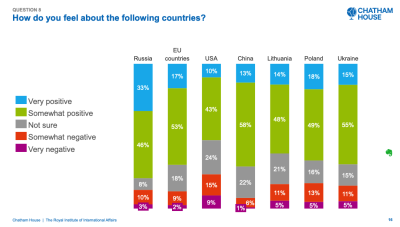 However, now that the opposition has reached a stalemate with the administration – the protesters can’t get Lukashenko out, but he can’t subdue them – Tikhanovskaya is increasingly appealing to Brussels to tighten the screws on Lukashenko with harsher sanctions. And after the downing of the Ryanair commercial flight and arrest of Roman Protasevich on May 23, Brussels has delivered. That will cost the Kremlin billions in additional support for Lukashenko that it doesn't want to spend. 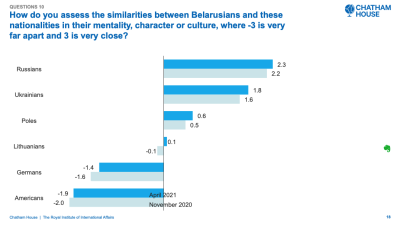 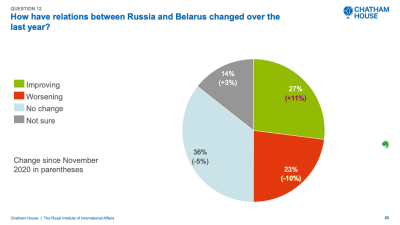 Belarus has already signed off on a Union State deal with Russia in 1999 but nothing has been done to implement it, as Lukashenko is afraid to give up his autonomy. While a closer union with Russia is the most popular option (32%) and a union with the EU is the least popular (9%), by far the most population option, should it be offered, would be a union with both the EU and Russia simultaneously (46%) and that option have become more popular by 5pp over the last six months.

While the population is still defying the government and not prepared to give up the fight, they remain under no illusion that life will continue to get worse if Lukashenko remains in office for any length of time.