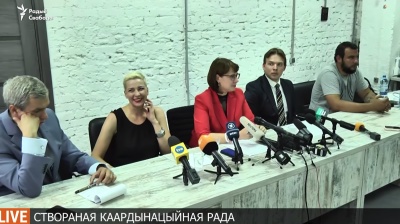 Belarus’ Coordination Council met for the first time on August 18 to start the long process of ousting Lukashenko and building a new government
By Ben Aris in Berlin August 19, 2020

Belarus’ Coordination Council met for the first time on August 18, a group of civil rights activists, opposition politicians, prominent businessmen, journalists and intellectuals that hope to ease Belarus' self-appointed President Alexander Lukashenko out of power and pave the way to a freer and more democratic country. It is the beginning of the longer, more difficult stage in the revolution, where the focus switches from the street to the negotiations with a rapidly expanding cast of actors.

Maria Kolesnikova, one of the trio of women that campaigned against Lukashenko, also dropped a small bomb during the meeting by saying that the opposition had no intention of ripping up the Union State deal, signed between Lukashenko and Moscow in 1999, that would bring the Russian and Belarusian economies much closer together – including the possible creation of a single currency in a copy of the Eurozone in the EU.

The suggestion highlights the warm regard the opposition continues to have for Belarus’ relationship with Russia and its desire to maintain those ties in a new Belarus, but at the same time Kolesnikova emphasised that they wanted pragmatic crystal clear transparent relations with all Belarus' partner countries, including the EU.

“The Coordination Council has been called for by Svetlana Tikhanovskaya with the aim of organising the transfer of power and ensuring a consensus in society,” the council speaker Olga Kavalkova said during a press conference  after the discussions. “The council acts on the basis of the fundamental principles of the constitution of the Republic of Belarus and does not aim to seize power by unconstitutional means. It does not call for actions that violate public order. Participants should act only in lawful and non-violent ways.”

The council rejected the official results of the August 9 election, called for all political prisoners to be released and new elections to be held. Throughout, the panel stressed they were not there to seize power, but wanted to proceed according to the law in the face of massive falsification of the election results. A simple recount of the votes is now impossible, as the ballots have been burnt by the CEC, according to reports.

The council also made clear it has no reform or political programme to promote. It was simply being formed with the participation of many famous Belarusians to aid the transition to a new government by peaceful and legal means.

However, Kavalkova went on to say that if there was no response from the Lukashenko regime, “there is already a huge political crisis, a general strike going on and we can expect a huge economic crisis. We hope the authorities appreciate this and everyone is interested in this transition to take place.”

Kolesnikova laid out the councils foreign policy saying:  "Our official position - we will maintain friendly, mutually beneficial relations that are pragmatic, crystal and transparent for everyone. We benefit from talking to all our partners: the Russian Federation, Ukraine, and the EU."

Kolesnikova summed up the situation by saying: “The hard work has only just begun and it will be hard for all of us, as we are not only starting to rebuild the institutions but also to build a strong and independent nation.”

A new potential opposition leader emerged from the meeting, the former diplomat and culture minister Pavel Latushka, who made a powerful impression. He also recently won public plaudits after he quit his job as director of Minsk’s oldest Kupala theatre in protest against Lukashenko police crackdown.

"The country is being ruled by the KGB and siloviki. We are not opposition, we are the majority,” Latushka said.

Latushka said that he expected the EU to come up with a clear policy towards Ukraine in the next days and invited it to mediate in the conflict between Lukashenko and the people. 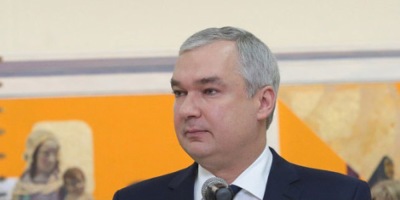 Never one to pull a punch, Lukashenko immediately condemned the meeting as a “coup d’etat” that was attended by “openly untethered Nazis”. He threatened the participants of the co-ordination council with "adequate measures,” but did nothing to stop the proceedings.

“They demand neither more nor less – to transfer power to them. This means that we regard this unequivocally: this is an attempt to seize power with all the ensuing consequences,” the incumbent president said.

While much of state TV has now joined the general strike, there were still reports on state TV the same day that Tikhanovskaya wants to join the EU and NATO, as well as ban the Russian language and the Russian Orthodox Church.

The president was ramping up the tension and also put the army along the Polish border on full alert, warning of an invasion during a televised state council meeting.

And small pro-government rallies were organised in several regional cities as Lukashenko attempts to rebuild his position, after he managed to alienate his base and most of the countries by unleashing a brutal police crackdown in the days after the elections. Lukashenko supporters – and he does have some genuine supporters grateful for the stability he brought – sport the official red and green flag, while others carry the Soviet-era republic flag and the orange and black striped flags of St George that is more closely associated with Russian nationalism. 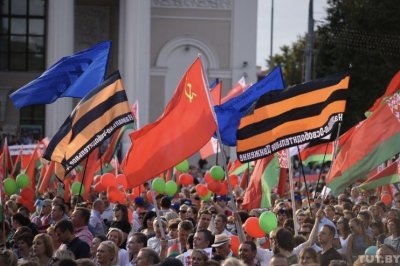 As the protests went into their tenth day, a standoff is developing where Lukashenko pulls whatever strings he can, while thousands of people gather daily on Independence Square loudly demanding his resignation, but with a minimal police presence.

But as the street rally’s first bloom begins to fade the question the opposition faces is: how long can they keep this up? Bulgaria’s protests have been going on for a month and the protest in Khabarovsk in Russia’s Far East is now into its second month, while those in Minsk have only finished their first week.

And while many workers remain nervous about losing their jobs – only a quarter of the workers at the legendary Minsk Tractor Factory have joined the strike because of these worries – the public have rallied to their aid. A crowdfunding campaign has raised $800,000 in a matter of days to provide financial support to any striking workers that get into financial difficulties.

Clearly Lukashenko is playing for time, yesterday suggesting he would “share” power if a new constitution was passed by referendum. But he also issued 300 medals to police officers to reward them for their “outstanding” work during the street battles of last week.

What role will Russia play?

A week into the uprising and the surrounding countries are beginning to get involved. Lukashenko said on August 16 that he was going to call on Russia for “support” and started off a round of speculation as to whether Russia would invade and keep the disenfranchised Lukashenko in office.

Leaders from across Europe called Putin on August 18 for urgent consultations, including German Chancellor Angela Merkel and French President Emmanuel Macron, but the Russian leader had only one thing to say to all of them: outside interference in Belarus' domestic political crisis was “unacceptable.”

Putin’s ire with the other European leaders is understandable, as Russia has many legitimate interests in Belarus, which is a major trade partner, home to key energy transport infrastructure, a supplier of strategically important software, among other things, not to mention the deep historical and cultural ties the two countries share.

The opposition have said little on the topic of foreign policy, but former English teacher and nominal victor in Belarus’ presidential election Svetlana Tikhanovskaya says she hopes for good relations with Russia, but suggests Belarus should also try and maintain good relations with the EU as well. An EU spokesperson admitted on August 17 that the EU has already approached Tikhanovskaya in Lithuania where she is now in exile, but no details of the conversation were released.

Kolesnikova, who is one of the trio that campaigned against Lukashenko, has been more outspoken and offered the EU a mild rebuke saying its “too soon for sanctions” on August 17, arguing they will make negotiations with the Lukashenko more difficult.

The Coordinaiton Council has a clear pro-Russian position that has the danger it will lead to an increase of Moscow’s hold over the country and increase its influence in the local economy, but at the same time the Council wants to make a move towards the EU and liberalising relations independently of Moscow. It's going to be a tricky balancing act to pull off.