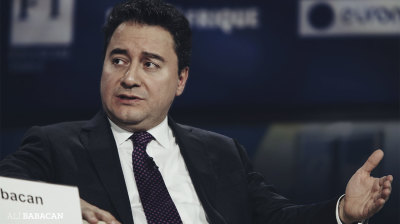 Ali Babacan, a former close ally of Recep Tayyip Erdogan who has set out to challenge the president’s ruling Justice and Development Party (AKP) with the message that Turkey needs a “fresh start”, on March 11 announced that his new party has been named the Democracy and Progress Party, or DEVA for short, which translates from the Turkish as “cure” or “remedy”.

The 52-year-old was a founding member of the AKP. He served as economy minister and foreign minister before becoming deputy prime minister with a key role in economic affairs between 2009 and 2015. Babacan, who has served as an adviser to the International Monetary Fund (IMF), is credited by many observers as the architect of much of the AKP’s economic success over it and Erdogan’s 18 years in power.

Babacan, who resigned from the Islamist-rooted AKP in 2019 citing “deep differences” with the party, said at the launch of DEVA in Ankara: “Our democracy is weak, our society cannot breathe. Our economy, education and health systems are alarming.”

“This country’s people have been made very sad in the last years … We will not allow our nation to have more sadness. This is the time to take responsibility,” he added.

“Babacan has enormous capacity,” Onur Nezih Kuru, a political scientist at Koc University in Istanbul, was cited as saying by Balkan Insight.

“His party can be an address for large numbers of the electorate and he can easily reach 10% of the total votes.”

DEVA is seen by analysts as targeting a wider group of people than the Future Party, created in late 2019 by former prime minister Ahmet Davutoglu, another former close ally of Erdogan.

Babacan comes from a conservative, industrialist Anatolian family. Despite his conservative background, he attended the secular TED College in Ankara and graduated in Industrial Engineering in 1989 from the city’s Middle East Technical University. He won a Fulbright scholarship from the US, where he studied for an MBA at Northwestern University in Chicago between 1990 and 1992. Babacan worked as a financial adviser for Turkish companies before becoming general director of his family firm, which has interests in energy, tourism, real estate and logistics, in 1994. In 2001, he helped to found the AKP.

Erdogan, regarded by critics as having become increasingly authoritarian and as having disregarded basic human rights with mass purges aimed at tens of thousands allegedly associated with the failed coup attempt of July 2016, is attempting to restore Turkey’s economic fortunes. The country’s economy went into a nosedive following the Turkish lira crisis that occurred under Erdogan’s watch in the summer of 2018.