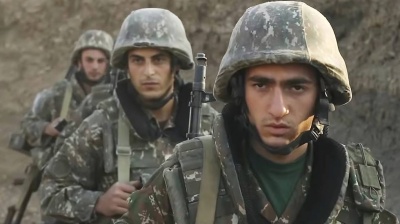 Armenian Prime Minister Nikol Pashinian has said that his country could make concessions over the Nagorno-Karabakh region if Azerbaijan was ready to do the same, AFP reported late on October 6.

“Conflicts need to be resolved on the basis of mutual concessions,” Pashinian was quoted as saying by the news agency in an interview. “Nagorno-Karabakh is ready, and Armenia is ready, to mirror the concessions that Azerbaijan is ready to make.”

October 6—the 10th day in the fierce and bloody conflict over the disputed enclave—saw more heavy fighting with the Armenian defence ministry reporting a “large-scale attack” by Azerbaijani forces along the southern front involving tanks and artillery.

Turkish Foreign Minister Mevlut Cavusoglu brushed off reiterated calls for a ceasefire made by France, Russia and the US when he met with Azerbaijani President Ilham Aliyev in Baku on October 6. He later tweeted: “There should be no doubt that when needed, we will act like one state. Turkey is Azerbaijan, Azerbaijan is Turkey.”

"OK, let the ceasefire take place but what will be the result? Can you [outside powers] tell Armenia to immediately withdraw from Azerbaijani territories or can you produce solutions for its withdrawal? No," he said after a meeting with his Azerbaijani counterpart, Ceyhun Bayramov.

In an analysis, Dimitar Bechev, a nonresident fellow at the Middle East Institute's Frontier Europe Initiative Center, said that “much like in Libya and in Syria”, Turkish President Recep Tayyip Erdogan may be hoping for a deal with Russian counterpart Vladimir Putin. “The Turkish president is biding his time until the Azeris make, and consolidate, territorial gains,” he suggested.

He added: "If and when that happens, he could propose a bilateral peace initiative to Russia. This would be a symbolic coup for Turkey, elevating the country to a major player in the South Caucasus, on par with co-chairs of the OSCE's Minsk Group [which has led negotiations for a Nagorno-Karabakh peace settlement since the early 1990s], Russia, the U.S., and France."

Nagorno-Karabakh is internationally recognised as Azerbaijani territory, but it is controlled as a self-proclaimed republic by ethnic Armenian separatists with close ties to Yerevan. Armenian forces hold control over seven regions adjacent to Nagorno-Karabakh.

Also on October 6, Russia’s foreign intelligence chief warned that the widening conflict over the territory was drawing in thousands of Islamist radicals who posed a threat to Moscow.

Sergei Naryshkin, head of Russia’s SVR Foreign Intelligence Service, said that the conflict was attracting people he described as mercenaries and terrorists from the Middle East. Turkey has been accused by Armenia and France of bringing in mercenaries from Syria to fight on Azerbaijan’s behalf, but despite mounting evidence it has categorically denied it is the case. Armenia has been accused of bringing in Kurdish mercenaries. Yerevan has denied making any such move.

Naryshkin singled out members of militant group Hayat Tahrir al-Sham, a group active in Syria formerly known as the Nusra Front, as well as Firqat al-Hamza, the Sultan Murad Division, and unnamed extremist Kurdish groups. “We are talking about hundreds and already even thousands of radicals hoping to earn money in a new Karabakh war,” Naryshkin said in a statement posted on the SVR’s website, as relayed by Reuters.

“We can’t not be worried that the South Caucasus is capable of becoming a new launch pad for international terrorist organisations from where militants could later cross into states that neighbour Azerbaijan and Armenia, including Russia”.

Iran, which has said it is working on a Nagorno-Karabakh peace proposal, has raised the same concerns.

Naryshkin said a new war in the region was unacceptable to Moscow. He noted that the latest upsurge in fighting was different from previous flare-ups due to its much larger scale and the fact that Turkey had for the first time so openly and strongly come out in support of Azerbaijan.

Syrian President Bashar al-Assad on October 3 joined those who have accused Turkish counterpart Recep Tayyip Erdogan of stirring up the conflict.

Naryshkin predicted that sooner or later the warring parties under international pressure would agree to a ceasefire and sit down at the negotiating table.

In the interview with AFP on October 6, Armenian PM Pashinian said it was Turkey's "full support" that motivated its ally Azerbaijan to reignite fighting in the disputed region. The escalating conflict was now a "war against terrorism", he said.

"While it is true that the leadership of Azerbaijan has been actively promoting bellicose rhetoric for the last 15 years, now the decision to unleash a war was motivated by Turkey's full support," the 45-year-old Pashinian said.

"Without Turkey's active engagement this war would have not begun," he added, speaking to AFP in Government House in the heart of Yerevan.

The conflict has seen the "active engagement of terrorist groups from the Middle East in the conflict zone," Pashinian continued, describing the role of Armenian forces as a "counter-terrorism operation".

French President Emmanuel Macron has claimed that "jihadists" have arrived in the conflict-torn region, accusing Turkey of crossing a "red line".

Armenia also accuses Turkish forces of fighting directly in the region. Pashinian said Turkey's F-16 fighter jets were "actively engaged" but Turkey has denied this and no firm evidence has been presented.

Armenia has become "the last obstacle" to Turkish regional expansion, Pashinian also said, warning that if "Europe fails to properly call this situation by its name," it could see Turkish forces outside Vienna, referring to the Ottoman Empire laying siege to the city in the 17th century.

If the current conflict deteriorated to the point that Armenia experienced a direct attack on its territory, key ally Russia would certainly come to its aid given the two countries' membership of a security alliance, he added.

"In case of a security threat to Armenia, Russia's engagement will be subject to our treaty framework. I am confident that as per the situation... Russia will uphold its treaty obligations," the prime minister said.

Azerbaijan’s President Ilham Aliyev said in an interview on October 5 with the Turkish state broadcaster that Turkey must be involved in the peace process for the Nagorno-Karabakh region after a potential future ceasefire.

“Turkey must definitely be in any upcoming peace process. A peace process will surely be started. Clashes cannot go on for ever, so the sooner the better,” Aliyev said on TRT Haber.

Aliyev said a ceasefire would only be possible if Azerbaijan received international guarantees and a “concrete timeline” from Armenia on withdrawing its troops. “We don’t have eyes on any other country’s lands, but what is ours should be ours,” he said.