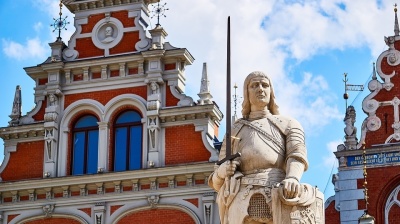 Riga’s gleaming office blocks, sleek airport and western hotel chains speak of the strides it has made since breaking away from the former Soviet Union in the early 90s — a confidence driven in no small part by thriving tourism, one of the fastest growing sectors of the economy. Large numbers of visitors are drawn to Riga’s medieval Old Town, a maze of spiral churches, cobbled streets, quaint cafes — stocked with Black Balsam, the renowned locally produced liqueur — vintage shops and the occasional serendipity.  My favourite was a Leica shop, an homage of sorts to the country’s little-known claim to fame: the invention of the sub-miniature Minox camera. Yet venture out to the suburbs and the Soviet legacy of the Latvian capital is evident, with sprawling, faceless apartment blocks remaining a prominent feature of the landscape.

The communist past is not only visible — I often heard Russian spoken in the street. Ethnic Russians make up nearly half of Riga’s population, many of them Soviet-era migrants and their descendants. They have played their part in the tiny country’s rapid economic growth over recent years, but Latvia’s links with Russia have more recently come under the spotlight and threatened one of its most important sectors — banking.

In recent years Latvia has been plagued by financial scandals. Some of its banks, offering Swiss-style banking secrecy, have been used by Russian organised crime and other criminal groups in the region to launder illicit funds. International scrutiny and intervention have prompted the authorities to take further steps to clean up the sector, but the jury is still out on whether they have managed to do enough thus far.

Under US pressure, the European Central Bank (ECB) precipitated the liquidation of Latvia’s third largest bank ABLV over allegations of money laundering linked to North Korea and illegal activities in Russia, Ukraine and Azerbaijan. In March this year, the Organised Crime and Corruption Reporting Project (OCCRP) named Latvian proxies connected to the so-called ‘Laundromat’ fraud set up to channel billions of dollars out of Russia.

The government has sought to address the country’s financial transparency shortcomings through legislation, handing the Financial and Capital Market Commission (FCMC), which supervises Latvian banks, greater powers and closing thousands of shell companies suspected of being implicated in illegal transactions. It has also signalled its intent to pursue individuals or companies seeking to launder funds through the country’s banking system. In July and September the FCMC fined Rigensis Bank and PrivatBank respectively over insufficient anti-money laundering and counter-terrorism financing controls.

The clampdown on corruption has led to a substantial reduction in the number of non-resident accounts, which were considered most vulnerable to misuse. But it will take years to repair the reputational damage resulting from the scandals and corruption probes, many of which are ongoing.

It is hard to calculate the impact of financial crime on the economy, although local commentators I spoke to said it had contributed to a downturn in investment. While the “flexible” banking sector as it was euphemistically described to me may have boosted capital flows in the short term, the lack of oversight and transparency has left the authorities with much to do to restore confidence in domestic banks.

Red flag checks are becoming the norm in Latvia as local and foreign financial institutions face much tighter regulation and government enforcement agencies are more active, with some domestic banks still trying to get to grips with the new rules and compliance requirements.

The government will be facing a review by Moneyval, the Council of Europe’s anti-money laundering and counter-terrorism finance monitoring body, later this year. Its findings, based on an assessment of compliance with Financial Action Task Force (FATF) standards, will have a significant impact on the banking sector’s reputation over the next 12 months. There is still some nervousness within the government and the local banking sector as to whether the reforms and measures taken so far are enough to avoid Latvia being included in the FATF ‘grey list’, comprising countries the watchdog deems to lack safeguards against money laundering and the financing of terrorism.

At one of Riga’s high-end hotels, I found local businessmen echoing these concerns, wondering how many potential international partners would be prepared to run transactions through Latvian banks. “It’s a reputational issue here,” said one. “Though there are so many more regulatory processes to follow now, foreign investors are still understandably cautious.”

Jonathan Clare is a senior associate at Alaco. Alaco Dispatches is the business intelligence consultancy’s take on events and developments shaping the CIS region.