YUGOSLAVIA 30 YEARS ON: ‘Yugo-nostalgia’ fading but not gone 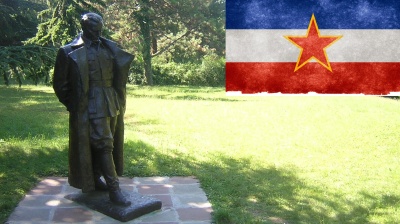 Since Yugoslavia started to disintegrate — Slovenia was the first republic to declare independence 30 years ago this month on June 25, 1991 — a whole generation has been born, grown up and started having a new generation of children of their own. The share of the population who still remember the socialist era is dwindling. Yet there are still some in the region who look back nostalgically to the years before the bloody breakup of the Yugoslav Federation, the economic hardships of the transition years and the persistent problems of poverty and high unemployment in some of the successor republics today.

How Yugoslavia is viewed — both positively and negatively — was among the topics of a panel hosted by the Vienna Institute for International Economic Studies (wiiw) on June 23, where panelists explored the economic, political and social reasons why some from the region want to shed their Yugoslav past but others are still ‘Yugo-nostalgic’.

On the economic side, wiiw economist Branimir Jovanovic shared a report from the think tank that shows a strong increase in inequality in six of the former Yugoslav republics (the report doesn’t include Kosovo) in the last 30 years. “The transition from socialism to capitalism in the former Yugoslav republics has been marked by a notable increase in inequality,” says the report.

This includes an increase in the share of national income in the hands of the top 1% of the population between 1989 and 2019 of 4-5 percentage points (pp) in Slovenia, Croatia and Montenegro, and a somewhat lower rise in the three other republics covered. At the same time, there was a substantial decline in the share of national income that ends up with the bottom 40% of the population in all the republics except Croatia.

However, Mojmir Mrak, full time professor and Jean Monnet chair at the Faculty of Economics, University of Ljubljana, argued that the concentration of wealth isn’t linked to factors specific to the breakup of Yugoslavia, but is a common pattern seen across the post-socialist space.

In addition, while the Yugoslav years may have looked better in comparison to the wars that followed, Mrak stressed the “politically dysfunctional and repressive” regime even through what is now seen as the good years, and economically the “huge mistakes in the 70s and the whole lost decade in the 80s — there was no growth for 10 years”.

Among populations subjected to political repression and states torn apart by the wars of the 90s, achievements of socialist Yugoslavia in reducing poverty and inequality are almost wholly overshadowed. Panelist Veton Surroi, founder and former leader of the Kosovan political party ORA and of the Kosovo Albanian newspaper Koha Ditore, singled Kosovo out as a special case because of the repressions of the 1980s, pointing out that from 1982 to 1987, 700,000 people out of the population of 2mn were dealt by the police in an official capacity. Even before that, he said, ethnic Albanians found it difficult to find their place in Yugoslavia — the country’s name means ‘Land of the Southern Slavs’ — and things worsened when the autonomy given to Kosovo under the 1974 constitution was taken away by the dictator Slobodan Milosevic.

“Because of the long adversarial relationship, even positives like the transformation of Albanians from widespread illiteracy to having a university in 30 years, or advances in health, life expectancy, economic growth, are seen in a different light, taking a back seat compared to the repression,” Surroi said.

This helps to explain why the latest major regional poll on Yugonostalgia carried out by Gallup back in 2017 revealed such wide variations in viewpoints between countries. The poll showed that Yugo-nostalgia was widespread in several of the former Yugoslav republics, where “many see the breakup as harming their countries, rather than benefiting them,” said the report. However, while an overwhelming majority held this view in Serbia and Bosnia, and around two-thirds in Montenegro and North Macedonia, under half did in Slovenia, and only a small minority in Kosovo and Croatia.

Vesna Pusic, former deputy prime minister and minister of foreign and European affairs of Croatia, attributed the low level of Yugo-nostalgia among Croats to the betrayal felt by many with the breakup of the federation and specifically when the Yugoslav army, once seen as the protector of the nation, committed atrocities in Croatia, Bosnia and Kosovo.

However, Pusic also talked of the sense of pride once felt in being from Yugoslavia especially in the years between the post-WW2 recovery and the economic collapse of the 1980s. She put this down to the unique policy of socialist self-management, the ability of Yugoslav citizens to travel freely across much of the world and its important role as a non-aligned state during the Cold War, the last giving Yugoslavia a level of international influence far greater than its relative size and economic strength. “Yugoslavia developed a sense of exceptionalism,” she explained. The loss of that when the federation broke up, she likened to the US during the Trump years when the country “abdicated its exceptionalism and role in world… how traumatic that was for an old established democracy”.

Mrak, while warning against viewing Yugoslav politics or economics in too rosy a light, recalls the country’s openness to “east, west, south and north”. “If you lived in Belgrade you could follow what was going on the world and be part of it. Now there is a much more parochial cultural life and unnecessary barriers to cooperation and communication among people who, after all, share a large part of their linguistic, intellectual and cultural heritage,” he said.

Speaking about Kosovo, Surroi also talked of the “intense sense of parochialism, of being closed and isolated”, which he believes is particularly intense in Kosovo because of its still unfinished conflict wth Serbia and unresolved international status, as well as the failure to secure visa liberalisation for its nationals to travel to the EU.

In Kosovo, the youngest country in Europe by the age of its population as well as the date it achieved independence, an estimated 65% of the population are under 30 and therefore have no memories of Yugoslavia before it started to disintegrate. “We have to remind the younger generations that it was very normal for us to go to Slovenia and Croatia … the average Kosovar kid in his 20s has enormous difficulty understanding how we were able to travel with a socialist Yugoslavia passport throughout most of Europe,” Surroi said.

Yugo-nostalgia is gradually fading into the past, but is kept alive in some countries by discontent with the present reality: with the exception of prosperous Slovenia and to a lesser extent Croatia, the ex-Yugoslav republics remain far behind the EU member states economically and catching up is decades away. Poverty and unemployment levels remain high in several states. Eventual entry to the EU is seen as a way to secure a permanent peace within the region and to win back the status and practical benefits of being part of a larger entity. In the meantime, regional cooperation initiatives aim to bring back some of the lost benefits such as the ability to travel, trade, work and study across borders.

What's the current outlook for Belarus' export sector?
2 hours ago
Russian gas exports to Europe tumble in June
3 hours ago
Can we trust Russia’s economic statistics?
1 day ago
LONG READ: Is Russia’s economy headed for 'economic oblivion', as a report from Yale says?
1 day ago
Is Lukashenko preparing to help Russia reopen Ukraine’s northern front?
2 days ago