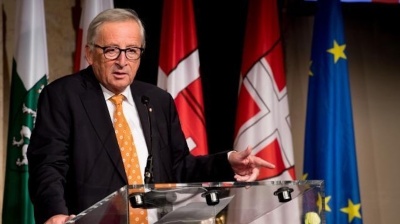 The history of the 1990s still has not been overcome in the Balkans, Juncker said in an address to the Austrian parliament.
By Denitsa Koseva in Sofia October 7, 2018

Without prospects of joining the EU in future, the Western Balkans might face new military conflicts soon, the President of the European Commission Jean-Claude Juncker warned on October 5.

The Western Balkan states – Albania, Bosnia & Herzegovina, Kosovo, Macedonia, Montenegro and Serbia – are in different stages in their path towards EU membership, with Serbia and Montenegro being the most advanced, while neither Bosnia nor Kosovo have candidate status yet.

“If such a complex European region gets an impression that we are not serious with the European perspective, we will experience, sooner rather than later, what we had in the Balkans during the 1990s,” Junker said in a speech to the Austrian parliament.

He added that the history of the 1990s still has not been overcome in the Balkans.

“The history of the 1990s was made possible because the past decades and centuries had not been dealt with,” Junker said, speaking two days before Bosnians vote in general and presidential elections in which nationalist politicians are widely expected to sweep the board.

In February, the European Commission adopted a new enlargement strategy for the Western Balkans, setting 2025 as the target for Serbia and Montenegro to become members.

Two months later, the EU recommended launch of accession talks with Albania and Macedonia. Bosnia is still waiting to get a candidate status, while Kosovo must resolve its dispute with Serbia before it can make a formal application to join the bloc. Five EU members do not recognise Kosovo as an independent state.

Boyko Borissov, prime minister of Bulgaria, stressed earlier this year that the EU should negotiate with the Western Balkan countries, otherwise it will leave them to other geopolitical players, an apparent reference to the increasing influence of Russia in some of the countries.

A similar statement was made by Austria’s Chancellor Sebastian Kurz, who said that communications with the six countries should remain open, as otherwise "other influences" will increase.