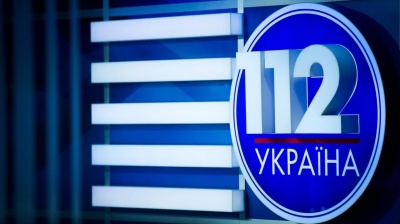 Ukrainian President Volodymyr Zelenskiy signed the decree that imposes special economic sanctions on the Novyny news media holding that belongs to Viktor Medvedchuk, the head of the Political Council of the Opposition Platform, For Life Party, on February 2.

Medvedchuk is the former éminence grise behind ousted president Viktor Yanukovych as well as a personal friend of Russian President Vladimir Putin, who is godfather to his daughter.

Seen by many as a proxy of the Kremlin in the upper echelons of Ukrainian domestic politics, Medvedchuk has tied up with oligarch Ihor Kolomoisky and jointly owns some of Kolomoisky’s media assets.

Among the media assets under Medvedchuk’s control hit by Zelenskiy’s sanction are the 112 Ukraine, NewsONE and ZiK TV channels. The three channels are popular and reach half the Ukrainian population, according to media monitors. They are accused of spreading Russian propaganda and misinformation, according to the president’s office.

Zelenskiy has undertaken a number of populist moves in recent months to try to bolster his flagging support amongst voters after largely failing to deliver on his campaign promises. Amongst other initiatives the government recently reduced the domestic household gas tariff in spite of International Monetary Fund (IMF) objections and banned the import of the Russian-made Sputnik V anti-coronavirus vaccine. At the same time, pro-Russian sentiment is improving as a result of the chaos that is increasingly being actively nurtured by Medvedchuk and other pro-Russian political elements in Ukraine.

The sanctions name Ukrainian MP Taras Kozak and his companies, including those linked with the three channels, which he bought in 2018-19. Kozak is a close associate of Medvedchuk and is also a member of the “Opposition Platform – For Life” Party.

The sanctions have been imposed for five years, preventing Kozak from making use of his property and blocking any television broadcasting. Kozak told 112.ua that the sanctions are “political reprisals by Zelenskiy,” because his party is doing well, while “public opinion polls show that the president’s Servant of the People’ Party is losing popularity.”

Kozak also claimed that the sanctions are the “latest act of censorship against the channel.” Kozak told 112.ua that the channels would continue to broadcast.

Kozak and Medvedchuk are likely to turn to the courts to overturn the sanctions; however, the District Administrative Court in Kyiv that is a favourite of oligarchs and that has repeatedly issued orders against the government and in favour of businessmen is powerless in this case, as it has no authority to undo presidential decrees. Only the Supreme Court has the power to overturn those.

The legality of the sanctions is in question, as the Ukrainian Constitution prohibits sanctions being brought against Ukrainian citizens unless they engage in acts of terrorism.

Kolomoisky’s 1+1 TV station that threw its weight behind Zelenskiy’s election campaign in 2019 and is 24.9% owned by Medvedchuk was not included in the sanctions.

The new sanctions will effectively take the TV stations off the air, as the conditions make their operation impossible. 112 international reported on its website that conditions include: