Ukraine to propose amendments to the Minsk Accords 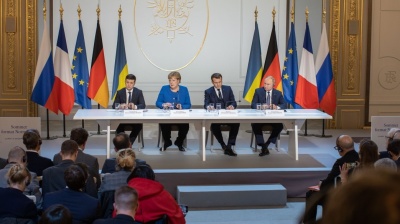 Ukraine wants to propose amendments to the Minsk Accords and take control of the border before elections are held in Donbas
By bne IntelliNews December 13, 2019

Ukraine will propose amendments to the Minsk Accords before the next Normandy Four summit in March, said Oleksiy Reznikov, Ukraine’s representative to the Trilateral Contact Group that is tasked with resolving the conflict in Donbas.

The Minsk Accords need to be revised so that they work effectively, he said. “Certainly, we will write down our proposals. They were even ready in the president’s initiatives,” he said in an interview with the hromadske.ua news site. He added, "the new draft will be discussed with the political advisers and foreign ministers of the four countries.”

In the press conference following the December 9 Normandy Four meeting – the first time Ukrainian President Volodymyr Zelenskiy came face-to-face with Russian President Vladimir Putin – German Chancellor Angela Merkel said the Minsk Accords are “not a document set in stone,” and she welcomed Zelenskiy’s proposals to amend them, without mentioning any details.

Putin brought up the issue of amending the protocols and the order of elections/border control, taking a hard line on both.

“We have divergent views on the question of the border,” Putin said. “We just want to strictly comply with the Minsk Protocols. There it says that Ukraine will establish control over the border on the day after the elections are held, after the politics is finalised. If we start changing items in the Minsk Protocols then we will have chaos.”

The paragraph he is referring to says: “Reinstatement of full control of the state border by the government of Ukraine throughout the conflict area, starting on day 1 after the local elections and ending after the comprehensive political settlement (local elections in certain areas of the Donetsk and Luhansk regions on the basis of the Law of Ukraine and constitutional reform) to be finalised by the end of 2015, provided that paragraph 11 has been implemented in consultation with and upon agreement by representatives of certain areas of the Donetsk and Luhansk regions in the framework of the Trilateral Contact Group,” according to the full text of the Minsk Protocols.

But getting the Russian side to agree to any change of the working at all – a deal that Putin negotiated together with Merkel and former French president Emmanuel Holland – will be extremely difficult.

“The Russians won’t accept any amendments to the Minsk Accords since that would undermine its current narrative – which has worked rather effectively throughout the world – that Ukraine isn’t upholding its end of commitments,” Zenon Zawada of Concorde Capital said in a note. “Accepting the amendments would also undermine the position that Putin is projecting of having the tactical upper hand and moral high ground in the talks.”

While holding elections and handing over control of the border were discussed at the Normandy Four meeting in Paris, clearly little progress was made and it was quickly agreed to put the issue off until the next meeting is held in March or April.

As a step towards moving closer to some sort of compromise the Steinmeier Formula is now playing a larger role in the negotiations. This is a formula suggested former German foreign minister Frank-Walter Steinmeier, who is now Germany’s president, that breaks down the issue of elections into smaller steps.

Putin insisted that Zelenskiy sign a commitment to the Steinmeier Formula as a precondition for holding the Paris summit and he has now demanded, and already received, a commitment that this formula be codified in Ukrainian law.

Putin also hinted at the Paris talks that he was open to some sort of changes to the Minsk Protocols saying that the document was “written as a compromise” and that the words could be “interpreted in different ways”. Diplomats now have four months to play with these statements and thrash out a mutually acceptable agreement.