A war of words erupted on October 15 between the former head of Ukraine's security service, Valentyn Nalivaichenko, and a close associate of President Petro Poroshenko, deputy head of the eponymous parliamentary group Igor Kononenko, over bne IntelliNews articles alleging corruption at the highest level.

At a sitting of the anti-corruption committee of the parliament on October 15, Nalivaichenko accused Kononenko of laundering budgetary funds via offshore vehicles, referring partly to bne IntelliNews articles here and here. “A British journalist has described a scheme connected with [British Virgin Isles firm] Intraco Management to be examined by the committee today… The scheme does not just involve Intraco, but also the offshore Ernion for the realisation of criminal schemes, and also involving other top officials,” Nalivaichenko said.

Kononenko refuted the allegations, telling the committee: “I officially declare that I personally have no connection to the company Intraco Management. I am not prepared to comment on the documents, because it is the first time I see them.” 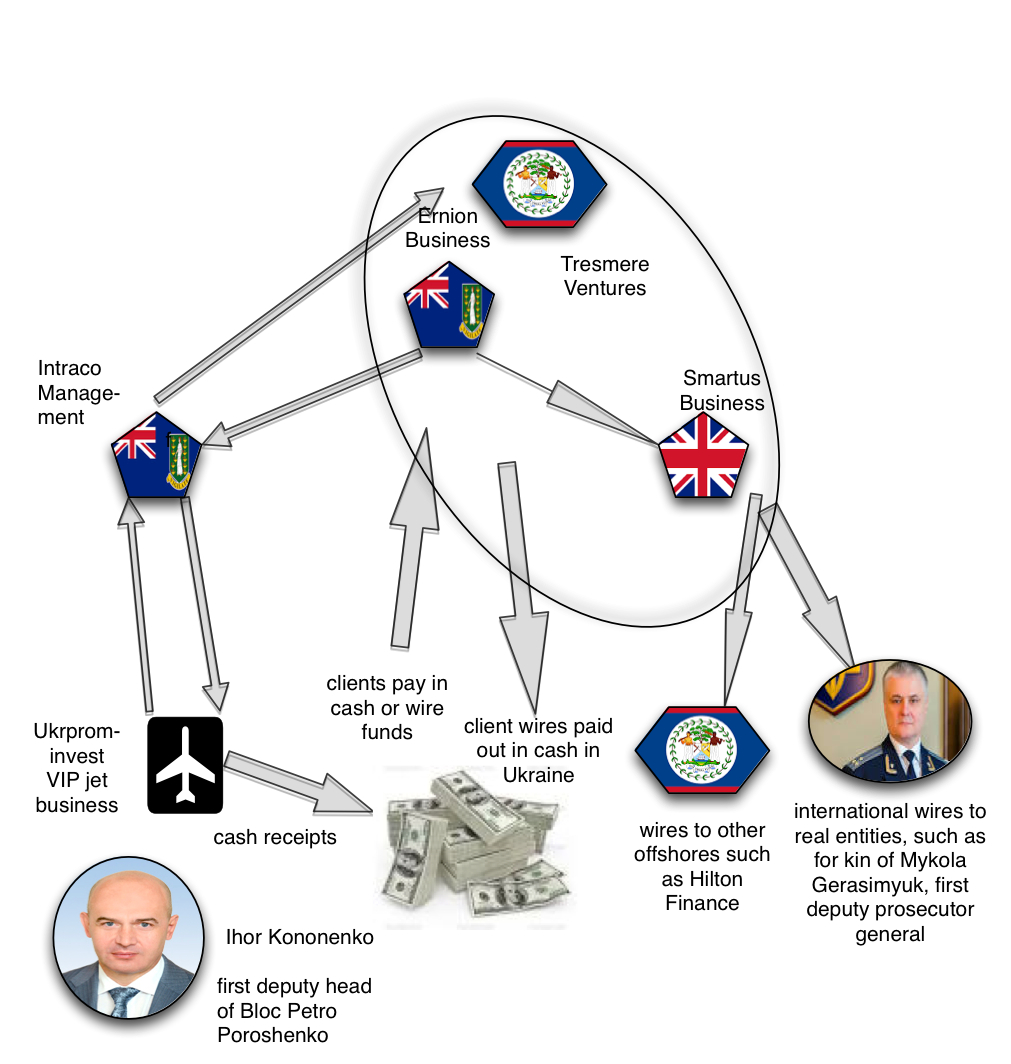 None of your Business Airlines

The money-laundering allegations raised by Nalivaichenko concern Intraco Management, an offshore vehicle connected to VIP aviation outfit Business Airlines. As previously described by bne IntelliNews. Business Airlines is the VIP aviation division of Ukrprominvest, the industrial holding founded by Poroshenko, Kononenko and First Deputy Secretary of the National Defence and Security Council (NDSC) Oleh Gladkovsky. Business Airlines is headquartered at the same Kyiv address as Ukrprominvest and affiliated subsidiaries, Bogdan Corporation and Leninska Kuznya, according to the company website.

According to Ukraine's company register, the owner and manager of Business Airlines is Darya Tsaregorodtseva, who is also the manager of Intraco, according to documents.

Many clients of Business Airlines paid for their chartered VIP executive jets in cash, sometimes even on board the plane, according to internal accounting documents seen by bne IntelliNews. Cash-paying clients included a number of corrupt cronies of ousted former president Viktor Yanukovych, such as former first deputy prime minister Serhiy Arbuzov, former deputy secretary of the NDSC Nestor Shufrich, former secretary of the NDSC Andriy Kluyev, and former defence minister Dymtro Salamatin. 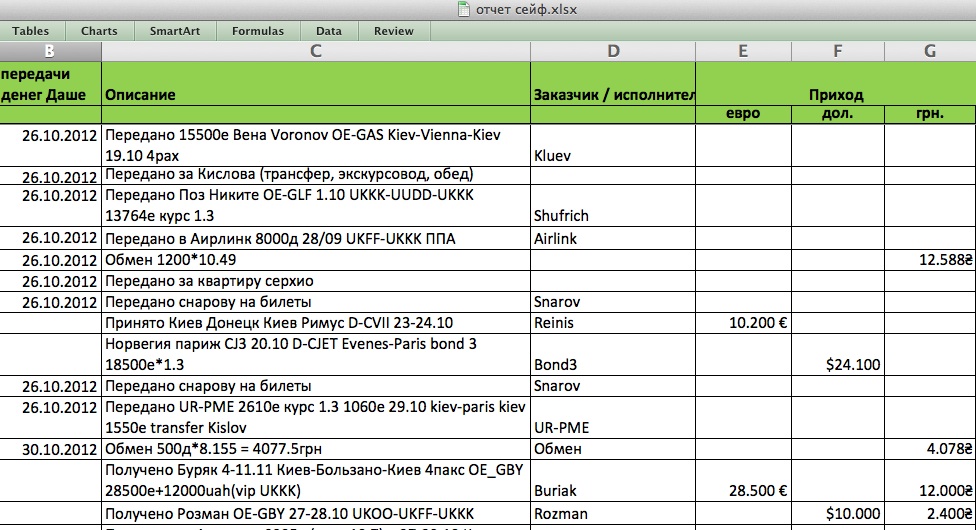 Intraco is used to making official payments to suppliers of the Business Airlines business, in particular aircraft operators. But given that a significant part of its income is received in cash, at least some of these off-the-books cash receipts need to be converted into bank funds and paid onto the Intraco accounts – a task which in Ukraine is often performed by money-laundering organisations called 'conversion centres'. 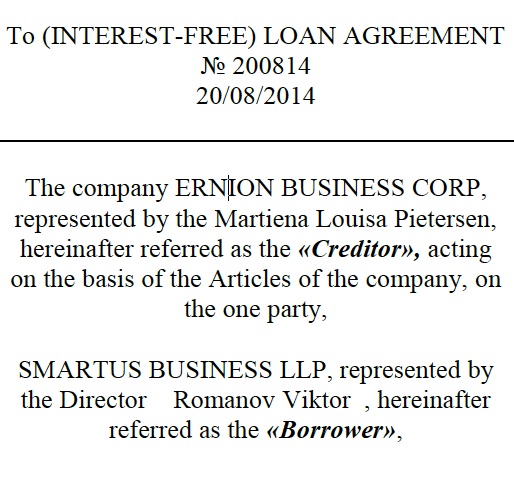 bne IntelliNews has seen a document that suggests Smartus Business was also part of the same money-laundering operation. The document appears to tell clients how to make payments to Smartus' bank account in Latvia –  a country whose banking system has been used widely to launder money emanating from the former Soviet space. Clients are told that money wired to Smartus should be designated as payment for “for import-export trade operations for mass consumption goods, households appliances and electronics”. 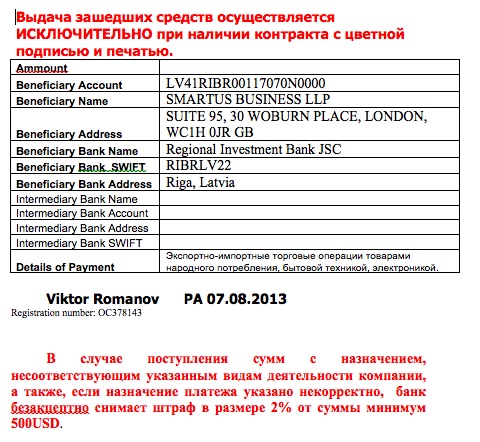 Suggesting that payments wired to Smartus could be converted into black cash disbursed in Ukraine, at the head of the document the operators warn that: “disbursal of funds paid to the account occurs EXCLUSIVELY on a contract being produced with colour seal and stamp”, implying that clients are responsible for faking their own paperwork.

Smartus could also be used to make anonymous international wire payments. Payments from Smartus in 2014 went to the kin in Slovakia and UK of Mykola Gerasimyuk, at the time Ukraine’s first deputy prosecutor general, as bne IntelliNews has reported, showing that the money-laundering platform enjoys the best political connections.

Smartus also transferred millions to, and received millions from, other offshore companies, according to documents seen by bne IntelliNews. Smartus for instance paid over $5mn to another shell company Hilton Finance Group in November 2014. 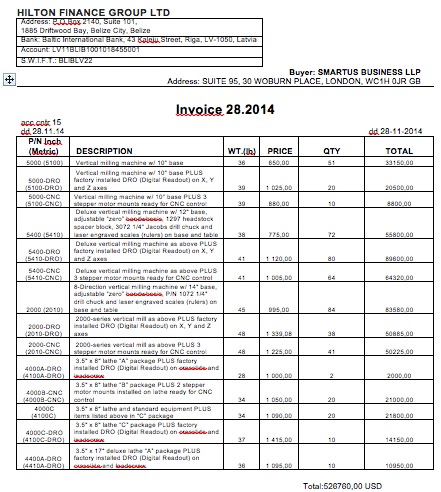 According to an invoice for the transaction, the payments were for machinery. But the deal may have existed on paper only. Hilton Finance boasts a rudimentary website that appears created solely to substantiate these and other payments. “Company Hilton Finance Group LTD was established in 2014 and is engaged in international wholesale... Our diverse products range is constantly increasing, turnover is growing, and new partners and suppliers are found,” the company blurb reads cheerfully.

Apart from Kononenko's role alongside Poroshenko and Gladkovsky as founders of Ukrprominvest, of which Business Airlines and Intraco are affiliates, one document points to the Kononenko family's direct involvement in running the VIP aviation business.

In 2012, one $70,000 wire payment made by Intraco requests payment notification be sent to the email address of Kononenko's daughter, Darya. The wire was made to a Belize offshore Tresmere Investments, which appears to likewise have been part of a money-laundering platform. According to a document for Tresmere seen by bne IntelliNews, clients should designate payments to Tresmere as for “home appliances, electronics goods and Technics”.

A note on the Intraco accounts placed next to the entry for the Tresmere transaction reads simply “cash”, suggesting the funds were paid out in Ukraine as black cash. 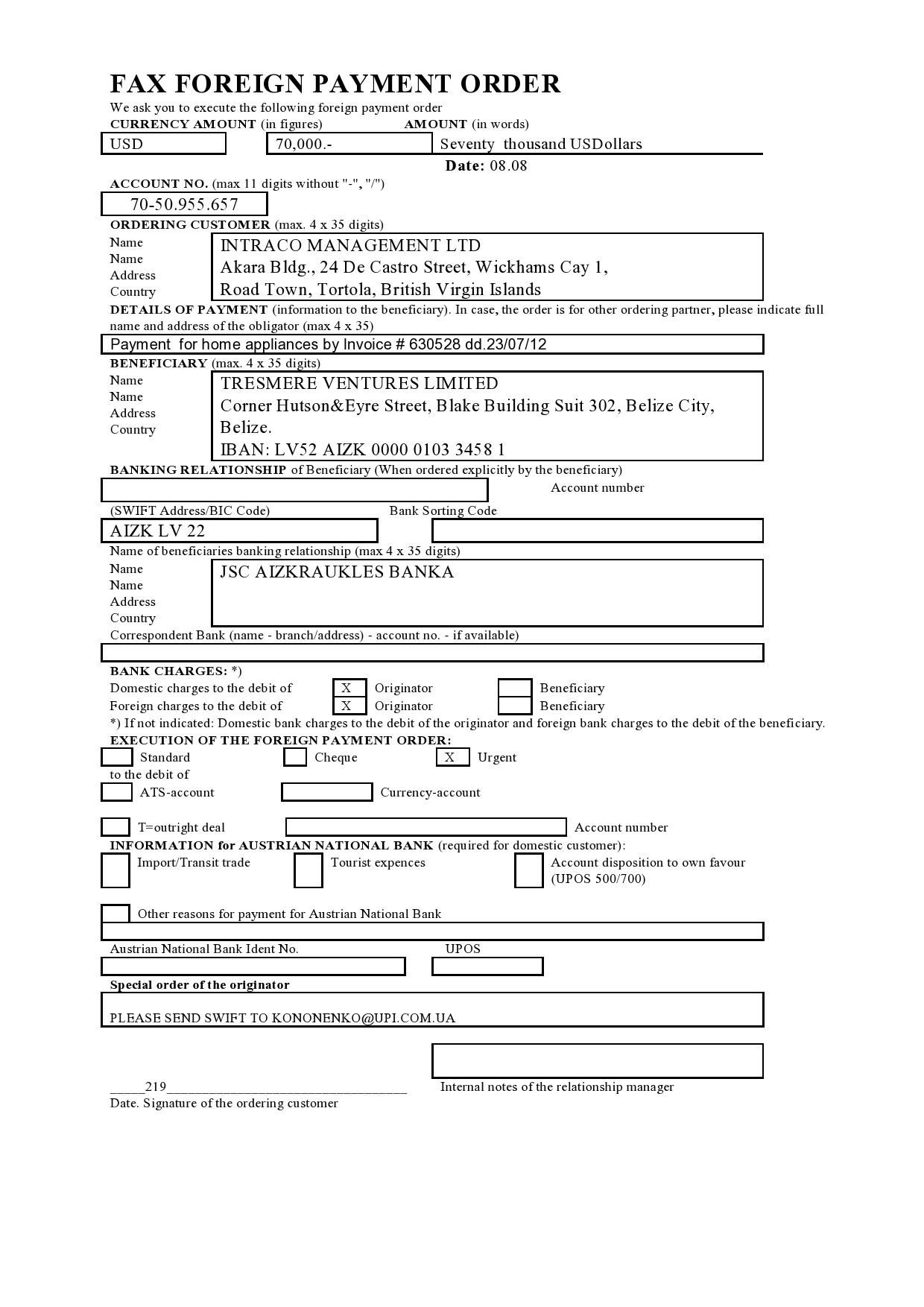 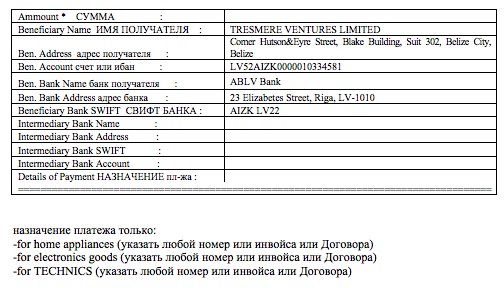