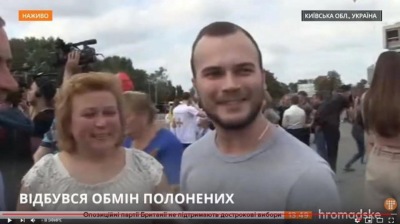 Russia and Ukraine swapped more than 70 prisoners on September 7 in the first concrete move towards ending the conflict between the two adversaries in several years. Among those released was Ukrainian film director Oleg Sentsov and the 24 sailors captured by Russia during a naval clash in November in the Kerch Strait.

Two planes left Boryspil airport in Kyiv and Moscow with 35 prisoners on each. The Russians released all the sailors captured in the Kerch Strait when the two navies clashed last November, as well as celebrity director Sentsov. The Ukrainians had been held in the high-security Lefortovo prison.

Sentsov had been Ukraine’s most prominent political prisoner in Russia. The 41-year-old filmmaker was arrested in Russian-annexed Crimea in May 2014 and was sentenced in a sham trial to 20 years in prison on charges of plotting a terrorist attack, which he denies. Sentsov nearly died in 2018 after 145 days on hunger strike, during which he demanded the release of all Ukrainian political prisoners, the Kyiv Post reports.

“I want to say thank you to those people who have been helping us and all our families all these years, who have been fighting for us and sought our release and ultimately achieved it,” Sentsov told reporters shortly after being reunited with his daughter, as cited by the Kyiv Post. “I hope that the rest of the prisoners will be released soon. But even with the release of the last prisoner, our fight is not over.”

A group of journalists and excited relatives gather to meet the Ukrainian plane as it touched down at Boryspil after almost six months of uncertainty. The Russian authorities claim that the Ukrainian navy vessels had illegally crossed into Russia maritime territory and fired on their ship as well as ramming them.

An investigation by Bellingcat found that it was likely that a Ukrainian vessel had crossed over the maritime border but only briefly and only by a few hundred metres if at all.

More seriously, former president Petro Poroshenko has been accused of deliberately sending the naval ship to test the Russian border guards in the hope of provoking a military reaction ahead of the presidential elections slated for April.

The capture of the sailors has remained highly controversial but the newly elected Ukrainian President Volodymyr Zelenskiy had made it one of his campaign promises to free the sailors and other POWs .

Zelenskiy was at the airport to greet the 35 men on their return, although many of the returnees ran to their relatives and completely ignored him. Sentsov did greet the president and shake his hand warmly in front of the cameras.

The return of the POWs is another big PR victory for Zelenskiy. In the first day on the job the new Zelenskiy-led government changed the constitution and nixed parliamentary immunity for deputies in a change that will come into force at the start of next year – another key campaign promise.

Zelenskiy also ordered the anti-corruption court (ACC) to start work on schedule on September 5, completing the triumvirate of a legal system that is completely free of government control to investigate, prosecute and jail corrupt public officials. The ACC has been a key demand of Ukraine’s donors, but Poroshenko fought tooth and nail to prevent its creation.

And the government plans to draw up over 500 draft bills in the next three months that will set the foundation for sweeping reforms, many of which are due to be enacted between November and January.

The prison exchange is another more concrete sign that there is a growing thaw in Russian and Ukrainian relations that is being brokered by both Berlin and Paris, although bne IntelliNews has argued that French President Emmanuel Macron is playing a particularly active role.

Macron has been very involved in Ukraine since Zelenskiy's election and was the first to call him on election night.

Macron also met with President Vladimir Putin at the start of September and talked about creating a market from “Lisbon to Vladivostok”, which is the ultimate goal of Putin’s foreign policy and is a phrase trotted out by western leaders when they want soften Putin up for concessions.

Macron followed up with an even stronger statement of the need to find an accommodation with Russia, saying “Europe without Russia is inconceivable”.

bne IntelliNews sources say there has been a lot of activity between Paris, Berlin and Moscow in the background ahead of the first so-called Normandy Four meeting (Russia, France, Germany, Ukraine) slated for later in September – the first time Zelenskiy will attend. And it appears that all sides are looking to restart the stalled Minsk II process to bring the fighting in Ukraine’s eastern region of Donbas to an end.

One suggestion is to adopt former German foreign minister Frank-Walter Steinmeier’s plan of breaking the Minsk accord into pieces where sanctions can be removed incrementally against achieving specific but simpler goals. The prisoners' release, coming as fast as it has and before Putin and Zelenskiy have formally met, strongly suggests that a relatively complex deal along these lines has already been discussed in some detail.

This is the second attempt at swapping the prisoners. The swap was reportedly underway on August 30, but was called off at the last minute. The swap was reported in a Facebook post that was later reshared by Ruslan Riaboshapka (Ukraine’s new prosecutor general), but turned out to be incorrect.

On the Russian side were 35 prisons most of whom were captured in Donbas and charged with illegally waging war on Ukraine’s territory.

Among the most controversial of the releases by Ukraine was  Volodymyr Tsemakh, a key suspect in the downing of the Malaysian Airlines flight MH17. The Security Service of Ukraine had arrested Tsemakh in a daring operation in Donetsk Oblast in late June and he is thought to be able to provide concrete details of Russia’s involvement in the catastrophe.

While the release of the 35 prisoners was met with cheers and tears, another 200 Ukrainian servicemen remain in Russian jails. The prison exchange was the first exchange since the conflict broke out in 2014 and one of the Minsk II conditions: both sides have agreed to exchange their POWs but little progress has been made in fulfilling that condition in recent years. In the last five years Russia has only released seven Ukrainian political prisoners. The exchange this weekend may be seen as the first concrete step either side has taken in restarting the process of meeting their Minsk II commitments.