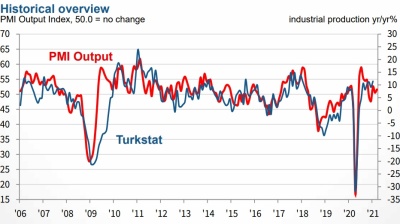 The Turkish manufacturing sector managed to secure renewed increases in new orders and expand both output and employment again in March, despite facing some substantial headwinds, according to the Istanbul Chamber of Industry Turkey Manufacturing purchasing managers’ index (PMI) for March, released by IHS Markit.

"The increasingly familiar problem of difficulties obtaining raw materials affected suppliers’ delivery times, inventories and input costs, while acting to restrict growth of production. Inflationary pressures were exacerbated by currency weakness. Firms will be hoping that some of these headwinds start to ease in the months to come so that growth in the sector can start to build momentum,” said Andrew Harker, economics director at IHS Markit.

The headline PMI for Turkish manufacturing rose to 52.6 in March from 51.7 in February. Any figure above 50.0 signals an improvement. Business conditions in Turkey have now strengthened in 10 successive months, according to IHS Markit.

The survey data, however, showed rates of both input cost and output price inflation reaccelerated. Supply shortages added to inflationary pressures at the end of the first quarter, with currency weakness contributing to the fastest increase in input costs in the year-to-date, while output prices rose to the greatest extent since December. Capital Economics said in an April 1 note that “the sharp fall in the lira over the past two weeks, which wasn’t captured in the [PMI] survey period, will put further upwards pressure on prices in Turkey”.

IHS Markit added: “Panellists reported signs of improving demand, while new export orders rose for the third month running and at a faster pace than total new business. Higher new orders and the addition of new production lines supported an increase in output, the third in as many months.

“The rate of expansion quickened slightly, but there were some reports that raw material supply shortages had prevented a stronger increase in output. These supply difficulties were highlighted by a further steep lengthening of suppliers’ delivery times. Lead times increased to a greater extent than in February, with global freight cargo issues exacerbating supply shortages of raw materials.”