Turkey to redeem $1.5bn of 10-year eurobonds on November 7 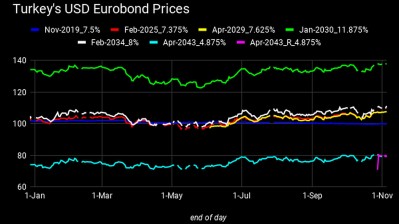 The Turkish Treasury will on November 7 redeem $1.5bn worth of 10-year eurobonds that were issued in September 2018 and paid a 7% coupon, according to the finance ministry.

At the beginning of October, there was speculation amid the investor community in London that a possible new Turkish eurobond issue was on the cards.

However, later in the month, Turkish President Recep Tayyip Erdogan went ahead with a military offensive against Kurdish fighters in northeast Syria. There is thus a big question mark over whether Erdogan will be able to obtain international market borrowings given the global condemnation, and even demonisation, he has been subjected to in response to the Syria incursion, which some analysts claim has included human rights atrocities.

The Turkish Treasury had about $2.7bn worth of deposits at the central bank as of October 25, according to bneIntellinews’ calculations.

Together with the $1.5bn scheduled for November 7, the Turkish Treasury will have redeemed a total of $3bn and €1.25bn this year, while raising a total of $8.7bn in eurobond sales. That included $7.25bn in USD papers, including $2bn from sukuks, and €1.25bn from five auctions held so far this year.

From November 2019 to September 2020, the Treasury is scheduled to repay a total of $11.1bn in external debt principal and interest payments, according to latest data from the finance ministry.

The next scheduled eurobond redemption by a Turkish lender is scheduled for January 24, 2020 when private lender Akbank will repay $500mn (XS1111101314), according to Is Invest’s daily fixed income bulletin.

For the Turkish real sector, the next scheduled eurobond redemption is scheduled for April 24, 2020 when Koc Holding will repay $750mn (XS0922615819), which was already refinanced in March this year during a boom in eurobond issuances by Turkish issuers just prior to the storm over the Erdogan administration’s manipulation of financial markets that started in the week prior to the March 31 local election polls.

According to recent Reuters reports, Mersin Port and Turkey’s flag carrier Turkish Airlines are currently in the debt market.

The latest eurobond auction by the Treasury was held in July to sell $2.25bn worth of 5-year USD-denominated papers with a coupon rate of 6.35%. That was also the latest eurobond sale held by a Turkish issuer.

Meanwhile, the Turkish government sticks to its FX and gold dominated domestic borrowing at a pace that continues to raise eyebrows.

The Treasury has borrowed a total of 82.3 tonnes of gold from the domestic market since October 2017, Finance Minister Berat Albayrak said on November 5 in a tweet.

Government-run news service Anadolu Agency reported details showing that 2.5 tonnes was borrowed in October 2017, 1.9 tonnes in April 2018, 2.1 tonnes in September-October 2018 and 1.1 tonnes in December 2018-February 2019. All of it came from individual investors.

Central government debt stock rose by 16% year-to-date to TRY1.24 trillion at end-September. It consisted of TRY701bn in domestic debt and TRY538bn in external debt.

Famous ex-defence reporter arrested, accused of treason
8 hours ago
Turkmen President Gurbanguly Berdimuhamedov takes a holiday as WHO mission finally arrives in Ashgabat
8 hours ago
Violent clashes with police at thousands-strong anti-lockdown protest in Belgrade
16 hours ago
Belarus presidential election to have no outside observers, opposition may united by a single candidate
23 hours ago
US intelligence memo admits there is “no evidence” of Russian payment of bounties to Afghans for killing US soldiers
1 day ago