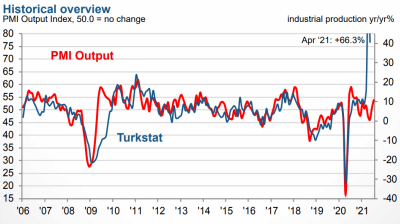 Turkey's Purchasing Managers' Index (PMI) for the manufacturing sector rose to 54 in July, hitting a six-month high as the loosening of COVID-19 restrictions unleashed potential in demand and production, survey data from the Istanbul Chamber of Industry and IHS Markit showed on August 2.

This index stood at 51.3 in June. Any figure greater than 50 indicates an overall improvement of the sector.

Commenting on the PMI performance of Turkish manufacturing, Andrew Harker, economics director at IHS Markit, said: “Latest PMI data pointed to a ramping up of output and new orders across the manufacturing sector as firms benefited from the loosening of COVID-19 restrictions and stronger customer demand. Firms showed themselves able to rebound quickly last year and appear to be on track to do so again, with sharper increases in employment and purchasing activity helping them to deal with rising workloads.

“With virus cases on the rise again, however, there may be concerns that growth plans could be hindered again in the months ahead.”

In a note to investors on the latest PMI reading, Nicholas Farr at Capital Economics said: “The rise in the PMI was relatively broad-based across the components and the [IHS Markit] release noted that the ‘loosening of COVID-19 restrictions in Turkey had a positive impact on demand and production in the manufacturing sector’. That said, Turkey has recorded a sharp increase in new daily virus cases in the past few weeks which could necessitate a fresh tightening of restrictions that weighs on demand.”

The July rate of expansion in manufacturing new orders was the fastest since August last year, the PMI data showed.

“The rate of growth accelerated from that seen in June and was the sharpest in nine months. While manufacturers were generally able to keep on top of workloads in July, there was some evidence that new order growth had placed some pressure on capacity. Backlogs of work were broadly unchanged.”

Efforts to secure inputs were hampered by ongoing disruption to supply chains, IHS Markit noted, saying: “Panellists reported that problems with shipping containers and difficulties sourcing raw materials had led their suppliers’ delivery times to lengthen. The rate of input cost inflation accelerated for the third month running, and was substantial. Respondents linked higher input prices to currency weakness and increases in raw material costs. In turn, firms raised their own selling prices at a marked pace that was stronger than the series average, albeit softer than in the previous month.”