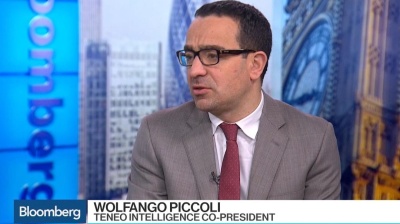 "Bottom line is that Turkey is facing this unprecedented crisis without significant monetary and fiscal space," says Piccoli.
By bne IntelIiNews March 20, 2020

Turkey’s $750bn economy will require a more robust stimulus in the face of the coronavirus (COVID-19) pandemic but the Turkish Treasury may struggle to find sufficient resources after the government pursued several years of heavy spending to prop up Turkish markets following the 2018 currency crisis, according to Wolfango Piccoli, co-president and political risk analyst at Teneo Intelligence.

Speaking after President Recep Tayyip Erdogan announced a Turkish lira (TRY) 100bn ($15.4bn) economic support package, Piccoli told Al-Monitor on March 19: “The package seems prepared with the assumption that the shock will be limited, and that macroeconomic activity will recover after a short period. This is a rather questionable approach, given the profound uncertainty ahead.”

JPMorgan on March 19 said Turkey can expect the worst annualised growth collapse in Q2 of any emerging market, at 17.2% q/q, given the crippling economic impact of the COVID-19 crisis.

“The bottom line is that Turkey is facing this unprecedented crisis without significant monetary and fiscal space given the government’s poor handling of the economy for a sustained period,” Piccoli was further quoted as saying.

By 19:05 Istanbul time on March 20, the Turkish lira was trading at 6.55 versus the USD, the weakest rate on record since the August 2018 lows of Turkey’s currency crisis.

The impact of COVID-19 shutdowns on Turkey’s service industry, which makes up 60% of the country’s economy, is one big concern, with fears of substantial layoffs at labour-intensive businesses.

Selva Demiralp, a professor of economics at Koc University and director of the Koc University-TUSIAD Economic Research Forum (TUSIAD is the Turkish Industry and Business Association), expressed concern to Al-Monitor over the situation with Turkey’s negative real benchmark interest rate, saying: “It is true that our policy rate is nowhere close to the zero lower bound. Yet, the policy rate is below the inflation rate, which corresponds to a negative real rate. This is a risk because it triggers dollarisation and further limits capital inflows at a time of low risk appetite. Turkey cannot afford another exchange rate shock in the middle of a global economic slowdown.”