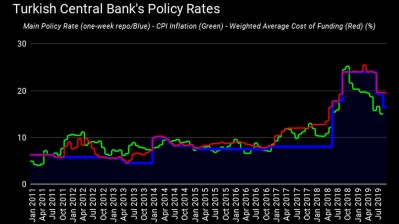 Turkey’s central bank slashed its key interest rate by a more-than-expected 325 bp on September 12, meaning that the national lender has now brought in easing of 750 bp overall since the president fired its governor two months ago for not cutting rates soon enough or fast enough.

The market consensus prior to the announcement was that the cut would be in the 250-275 bp range. Prior to the replacement of the central bank governor, there were no market expectations that the benchmark rate could fall from 24% to 16.50% via just two MPC meetings, but Erdogan has made regular and ‘noisy’ statements in recent weeks outlining how he expected major monetary loosening. The next MPC meeting is scheduled for October 24, while the last one of the year is to take place on December 12.

Explaining its latest monetary standpoints following the communication of the rate cut, the Central Bank of the Republic of Turkey (CBRT) caused some amusement and confusion among market participants by issuing a statement saying it was moving cautiously.

"I love how in cutting policy rates 325bps, the CBRT argues the need for a cautious monetary stance," said Timothy Ash, an emerging markets strategist at BlueBay Asset Management.

“Not sure they signalled slower easing at all. If inflation hits single digits in October, if the Fed and ECB are still in roll over and tickle my chest mode with liquidity, then the CBRT will just not be able to resist giving Erdogan what he wants,” he added on Twitter.

In a note to investors, Jason Tuvey of Capital Economics observed: “Comments from President Erdogan over the weekend had probably prompted market participants to shift their expectations towards an even steeper rate reduction.”

He added: “Ironically, falling inflation, coming shortly after steep interest rate cuts, will only reinforce President Erdogan’s unorthodox view that looser monetary policy is needed to bring down inflation. And the favourable market reaction to the rate cuts at the last two meetings means that the CBRT is likely to feel comfortable that it can press ahead with rate cuts.”

Bloomberg, meanwhile, said in a report entitled “Turkey Signals Slower Easing Ahead after another Jumbo Rate Cut” that the central bank had indicated it is set to slow the pace of monetary easing as it navigates the conflicting demands of the presidency and the markets.

Ercan Erguzel of Morgan Stanley responded to the second big rate cut in a row by saying in a note: “We read this [CBRT monetary policy] statement as a signal that next moves in the policy rate are more likely to be measured compared to the last two big cuts,”

Erguzel expected to see a 75 bp cut on October 24. He maintained his end-year policy rate forecast at 15.75%.

September 12 also saw the European Central Bank (ECB) cut its deposit rate to a negative 0.5% from a negative 0.4%. Additionally, the ECB said it would re-launch €20bn worth of monthly bonds purchases in a restart of its quantitative easing programme, starting from November.

The market correctly anticipated the 10bp rate cut from the ECB, but had estimated the bond purchasing would be set at €30bn per month.

Following the ECB announcement, the euro started fetching less than USD1.10 for the first time since April 2017.

Focus on the Fed

Now, the focus turns to the Fed’s rate setting-meeting to be held on September 17-18. The global monetary policy environment has turned benign for the lira in recent months and Ankara will be hoping for another move that plays to its advantage.

Following the Turkish central bank’s rate cut announcement, the USD/TRY rate fell into the 5.65s in the course of just a few minutes, descending from the 5.75s. The local currency was trading at 5.6599 against the dollar at around 23:20 Istanbul time, stronger by 1.54% d/d.

The reactions on Turkish eurobond markets, when held up against the 5-year credit default swaps (CDS) curve, to ‘Erdoganomics’ have been eye-catching of late. Observers will be watching even more closely to ascertain whether the government’s control and manipulation of the markets is expanding.

Yields on domestic benchmark 2-year and 10-year bonds are now below 15%. Foreigners held only 12% of the Turkish government’s domestic government bonds stock as of September 6, according to the latest data from the central bank.

The lira’s odd reactions to the dramatic rate cuts continue to stretch the reasoning skills of market commentators.

Adam Samson of the Financial Times delved into the mixed and rather muddled expectations, asking “Why is the lira rallying?”

Samson quoted Paul McNamara of GAM as pointing out that there had been "a lot of talk" among investors that there would be an even deeper rate cut of around 400 bp. He also quoted Erik Mayersson of Handelsbanken as saying that the reduction was "more than expected by forecast economists (including myself), less than expected by investors".

“If the central bank is mindful of market expectations, the pace of easing is likely to slow down as the policy rate approaches a level which is tolerated by investors,” Piotr Matys of Rabobank told Bloomberg.

“Though 325bp is a bit above [the expectations], it’s nothing too dramatic,” an unnamed emerging markets portfolio manager told Global Capital.

The references made to anonymous “investors” in analysts’ notes are nothing unusual, but they do beg the question of who exactly is investing in the Turkish lira right now.

Foreigners’ net sales of domestic government bonds have amounted to $313mn since August 9.

There was an inflow of $111mn into Borsa Istanbul in the week ending September 6 but total outflows since July 26 have amounted to $442mn.

So far this year, foreigners’ net purchases of Turkish equities have amounted to $540mn while their net sales in domestic government bonds stood at $2.26bn and $147mn in domestic corporate bonds, suggesting a total portfolio outflow of $1.86bn.

The central bank data also showed that Turkish real persons’ FX deposits at local lenders rose to a fresh record high of $117.7bn as of September 6 from $117.1bn a week ago.

The positive thing here for officials is that Turks are not pulling their savings from the system, a course of action that would trigger a dramatic economic collapse and certainly bans on FX deposit withdrawals. It’s wise to remember that those FX deposits are just bank records. There is no such thing as so many dollars at the local lenders because the central bank sells reserve requirements via public lenders to keep the lira under control.

On the price development front, analysts say Turkey’s official inflation rate is all set to fall into the single digits in September from August’s 15.01% because of the base effect. That will then be reversed in November. However, the magical power of Erdoganomics could prove them wrong all over again.

Bye-bye economic history
One surprise that seems nailed on for the near future is growth figures that will defeat all lessons anyone thinks they’ve taken on board from economic history.

Erdogan’s son-in-law and finance minister Berat Albayrak said during this week’s European Bank for Reconstruction and Development (EBRD) celebration of 10 years on the Turkish market that he believed Turkey’s economy would post positive annual growth for 2019.

Both the consumer and producer price inflation figures would fall into the single digits in September while the current account would post a record surplus for July, Albayrak added.

Albayrak’s official figures are pretty swell, albeit not logical, but the rumour mill keeps churning on whether his father-in-law will fire him or he will manage to cling on.

Albayrak had not been seen in the media for a while.