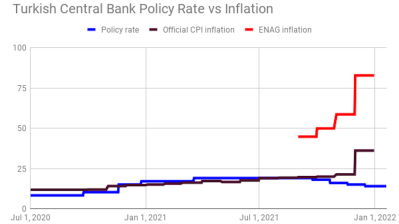 Turkey’s official consumer price index (CPI) inflation rose to 36% y/y at end-2021, the highest level seen since February 2002. It surged from 21% y/y in November and 15% y/y at end-2020, the country’s national statistical institute TUIK said on January 3. One unofficial assessment estimated inflation actually grew to 83% y/y by the end of 2021 as Turkey's economic crisis intensified and alarm grew over President Recep Tayyip Erdogan's refusal to use conventional monetary tools to address the country's financial turmoil. Surveys have shown most Turks do not trust the official inflation data.

The market was expecting end-2021 official inflation to be announced at around 30%.

Currently, the market sees the official inflation figure as entering the 40%s in the coming months.

The estimate showing end-year inflation at 83% y/y, also released on January 3, came from the Inflation Research Group, or ENAG, which is headed by Istanbul academics. ENAG said inflation climbed to that height from 59% y/y in November, 50% in October and 45% in September.

As of January 1, the price hikes bombardment of Turks continued with substantial natural gas and electricity tariff rises. Fuel prices and all other prices are simply booming.

January 3 brought no official statement from the central bank on intervening in the lira market, suggesting that backdoor interventions might be making an impact on the USD/TRY rate. On January 4, that matter of interventions should be clearer—the central bank is due to release its daily balance sheet for January 3.

Also on January 3, the national lender said that exporters were now obliged to sell 25% of their export revenues to the central bank.

On January 20, Turkey’s first rate-setting meeting of 2022 will be held.

At the last monetary policy committee (MPC) meeting, held on December 16, the central bank cut its policy rate by 100bp to 14%, bringing overall cuts to 500bp since September 23.

The accompanying rate decision statement implied that the MPC was planning to keep the benchmark on hold in Q1.

On January 29, the Fed will release the results of its next meeting.

On February 3, TUIK will release the official inflation data for January.

In a speech on January 3, Erdogan, who remains defiant that monetary orthodoxy is wrong in contending that raising interest rates helps to tame inflation, asserted that Turkey was "going through a transformation in economy and rising to the next league". He added that the nation was "reaping the fruits especially in exports of our country's efforts and hard work in the past 20 years to bolster our foreign trade".

Analysts were lining up to counter that Turkey is actually moving closer and closer to the abyss.

Economist Ozlem Derici Sengul, founding partner at Spinn Consulting, in Istanbul, forecast that official inflation could reach as high as 50% by the spring unless the direction of monetary policy was reversed.

"Rates should be immediately and aggressively hiked because this is urgent," the BBC cited her as saying, while accepting that the central bank was unlikely to act.

Russia’s CBR reserves down $43.7bn since the start of the war
14 hours ago
Industrial inflation exceeds 25% y/y in Moldova
15 hours ago
Romania’s construction companies post robust 6.5% growth in Q1
16 hours ago
Russians trade TV news for social media as war-weariness sets in
1 day ago
Net FDI in Bulgaria jumps four times y/y through March to €1.05bn
2 days ago